2020 Was a Roller Coaster of a Year For Theme Parks. But New Ads Show They're Making a Comeback

The epicenters for family fun and thrills in America were dealt a harsh blow in the wake of the COVID-19 pandemic. In March, the growing health crisis forced theme park giants to suspend operations and hit the brakes on all new ride and attraction projects. Second-quarter reports from 2020 painted a bleak picture of the theme park industry. Attendance staggered to a halt while revenues declined by more than 90% over a three month period.

Since then, US theme parks have been engaged in a precarious tug-of-war with local, state, and federal government officials. And as we come down from one of the deadliest surges, many visitors report they won't be ready to return to amusement parks until the COVID-19 vaccine becomes widely available.

Knowing this, let's take a look at the digital ad trends for the industry's top three players before the onset of the pandemic and how they're pivoting to make a comeback in 2021.

On March 12th, for the first time in its 65-year history, the iconic Disneyland and its adjacent California Adventure shut down for a month and has not reopened since. While Disneyland officials angled for an optimistic reopening date of July 17th, its 65th anniversary, they quietly scrapped their plans when California declined to issue theme park guidance. The Downtown Disney shopping and dining area reopened on July 9th under California's updated restaurant and retail opening guidelines.

From an advertising standpoint, Disneyland's digital activity and trends tell a fascinating story. In February 2020 alone, the brand dedicated $1 million to Facebook and Youtube desktop and mobile ads, raking in 100 million impressions. By March 13th, ad activity across all channels ceased for five months until September. Disneyland then resumed digital ad campaigns, with spend peaking in October and December for holiday event promotions. In October, their top creative, a 15-second video spot, alluded to a full park opening even though only Downtown Disney was accessible to the public. Compared to 2019's over $13 million digital ad budget, the Mouse invested a mere $3.5 million into 2020 digital campaigns.

Disneyland recently announced plans to celebrate the 20th anniversary of California Adventure with "A Touch of Disney," a limited capacity ticketed event starting in mid-March and running through early April. We may see some cross-promotion for this event bleed over into ad campaigns across Disneyland's social media platforms. We expect Disneyland to ramp up advertising once it gets the green light from county and state officials to transition into a phased reopening.

In tandem with its mousey competitor, Universal Studios Hollywood and Universal Orlando Resort also announced both resorts would close in hopes of containing the spread of coronavirus. According to Comcast's annual report, Universal theme park revenue dipped 68.9% from $5.9 billion in 2019 to $1.8 billion in 2020. 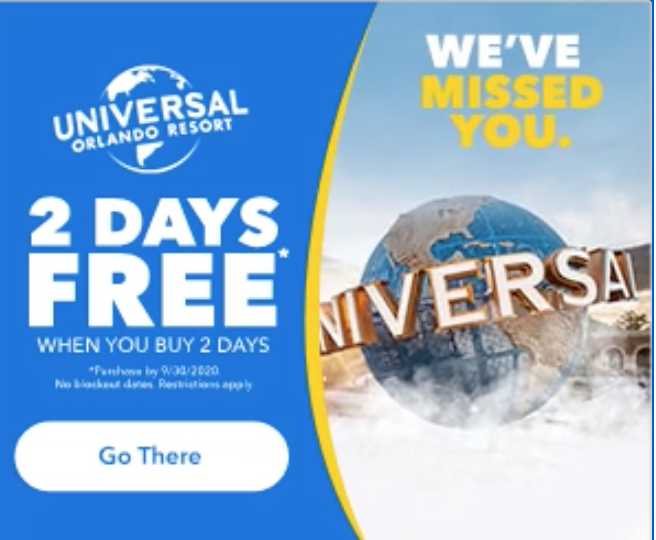 In early 2020, Universal was ramping up for a busy spring season, throwing over $1.7 million behind its February digital ad campaigns alone. Following the park's shutdown, Universal halted almost all ad activities in April and May. When Universal Orlando opened back up to the public on June 5th, ad activity spiked with over $700,000 going to Youtube desktop video, desktop display and mobile video ads in July. Unlike Disney and Six Flags, Universal decided to invest a significant amount of capital on Trip Advisor desktop and video display ads, with 45% of ad spend share in February 2021 devoted to the travel website. 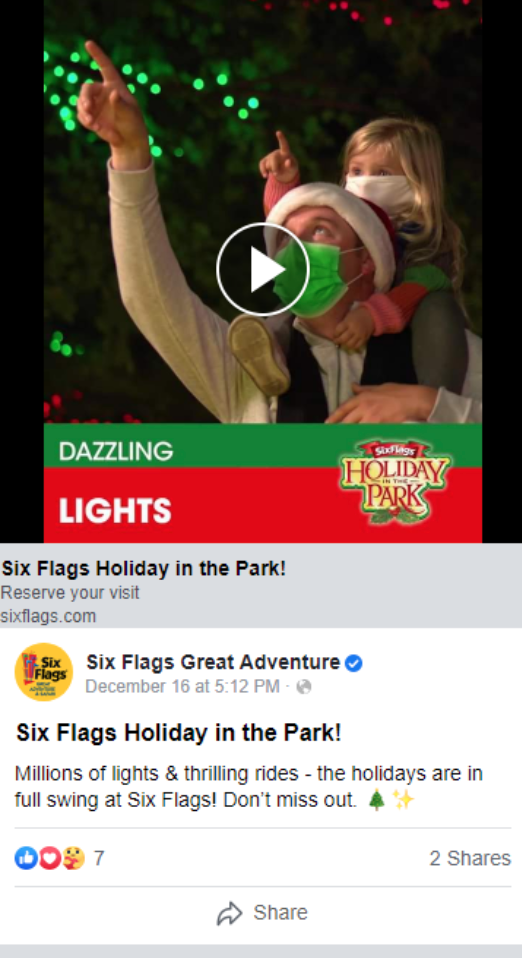 Six Flags dominates the regional theme parks business, with 26 locations across North America. The theme park giant reports it plans to open all 26 of its amusement and water parks for 2021. Six Flags saw an 83% decrease in park attendance in nine months in 2020 from the 26.7 million who visited over the same period in 2019. The company's ad activities froze in April then picked back up in May.

Six Flags invested over 90% of its ad budget into Facebook and Instagram ads, reaching a peak in October and December promoting its trademark Fright Fest Halloween Event and COVID-friendly Holiday Drive-Thru Experience.

Taking into account the current health crisis, the long-term prognosis for theme parks looks optimistic. According to Freedonia Focus Reports, annual visitation numbers for theme parks in America are expected to rise by 2.2% yearly through 2024. Only time and improved vaccination rates will tell how these theme park juggernauts will weather the COVID-19 storm.

Public sentiment surrounding the theme parks remains mixed. With all three brands expected to resume park operations at varying capacities in the coming months, we're confident that year-over-year ad spend will reflect a positive change over the whiplash-inducing roller coaster ride that was 2020.