US ecommerce sales reached $794.50 billion in 2020, up 32% from last year — a likely result after nearly one year under pandemic lockdown restrictions.

During this time, Buy-Now-Pay-Later (BNPL) platforms have skyrocketed in popularity as a way for furloughed or laid-off Americans to purchase the goods they want on a payment plan. And as stimulus checks remain few and far between, BNPL offers consumers — millennials and Gen Zs, specifically — an excellent way to get their quarantined shopping fix in an affordable way.

How have BNPL platforms like Affirm, Afterpay, and Klarna digitally advertised to  consumers through a pandemic-induced economic recession? Mainly via connecting with younger generations and heavy investment in social media advertising.

Cashing in on Afterpay Day 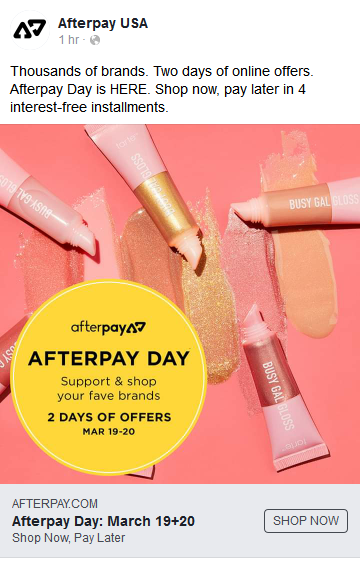 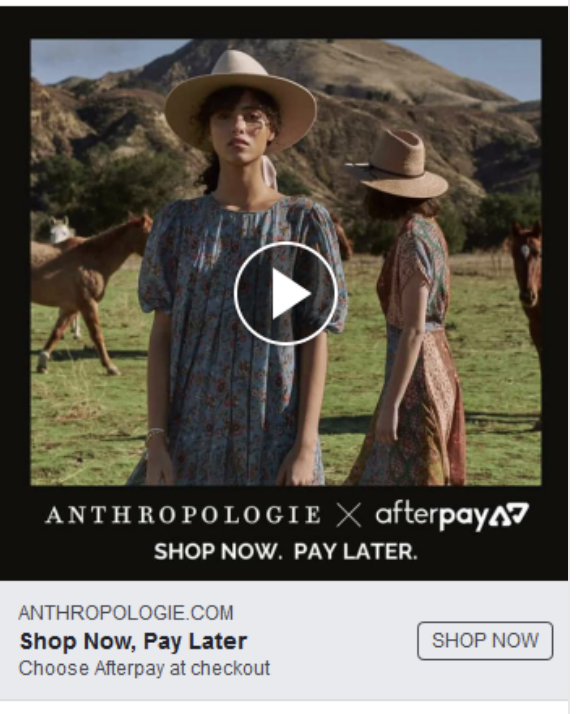 A 2019 eMarketer report found that 73% of American Gen Z shoppers want brands and retailers to connect with them through Instagram. Afterpay has taken note, as it invested less than half ($4.2M) of its ad budget in Instagram in the last year, with only Facebook ($4.5M) superseding IG ad spend. Afterpay spent the remaining  six percent of its total spend on desktop and mobile video ads.

The company published over 1,800 unique creatives on Facebook and Instagram, focused mainly on retail partnerships with brands including Adidas, Anthropologie,  MAC Cosmetics, Fenty Beauty, Urban Outfitters — all companies that gear its marketing toward younger generations.

Afterpay hit a spending peak in March 2020 with $1.5M spent on over 28 unique Facebook creatives to promote “Afterpay Day,” a two-day event in March where Afterpay users receive special deals across a host of brands. Afterpay Day coincided with the beginning of nationwide lockdowns, so the company likely also saw a boost in usage last March.

More recently, Afterpay has been spending more on digital ads to promote Aritzia, Old Navy, and even the Pancreatic Cancer Action Network.

Klarna’s top 10 creatives from March 2020 through February 2021 feature a millennial pink and light purple color scheme, which ironically highlights the audience that Klarna is trying to reach, and offers a bit more creativity than Afterpay’s straightforward ads. 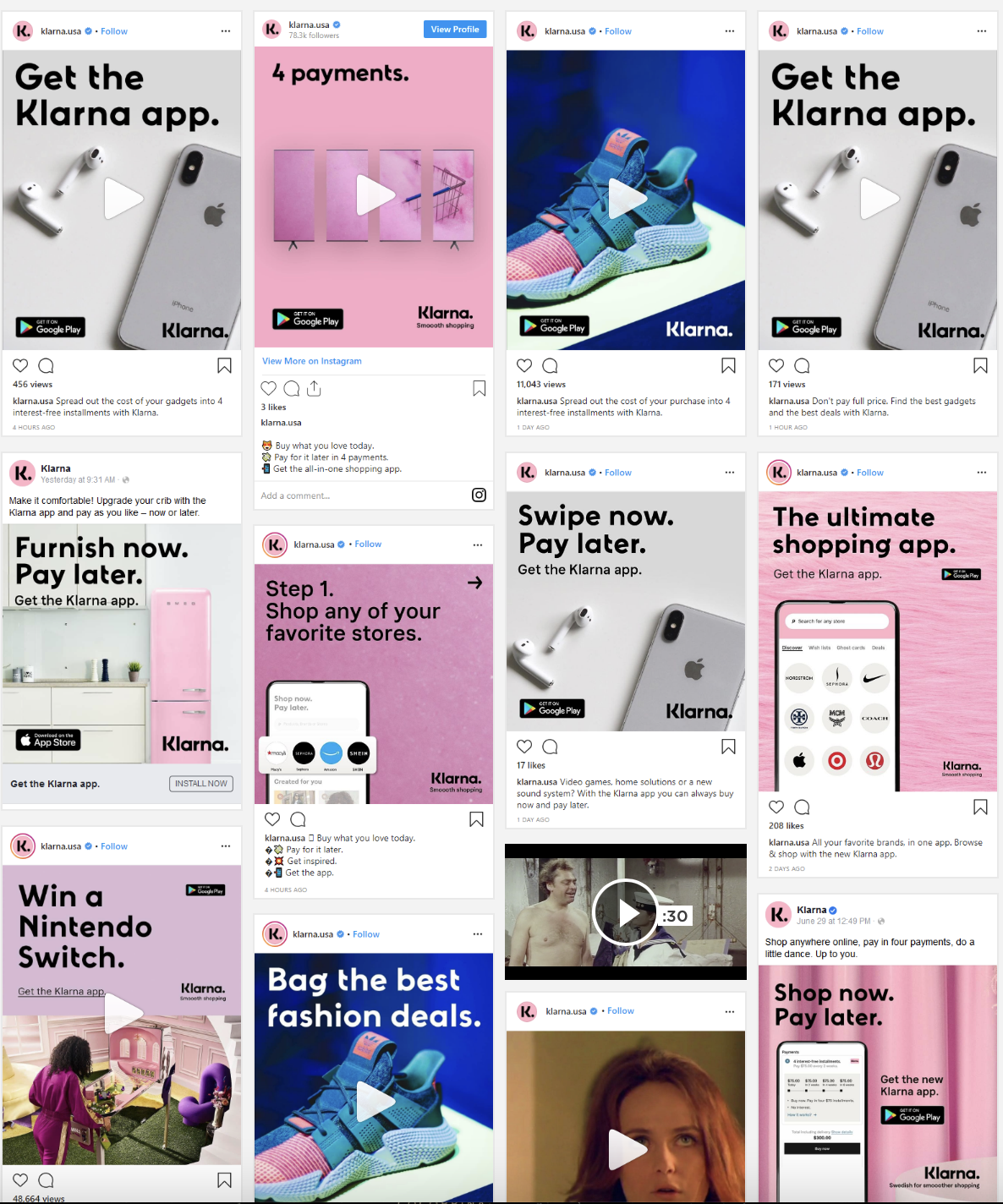 Although Klarna spent only 3% of its estimated ad spend on YouTube in the last year, its unique, old-timey ads are certainly worth mentioning. Swedish Klarna has taken clips from old Swedish shows and dubbed the closed captions to read as if the actors are discussing the shopping app. Pathmatics captured 11 of Klarna’s video ads and two display ads on YouTube since March 2020.

Outside of social media, Klarna has invested in digital ads on a number of different lifestyle publications, spending a collective $603K on Cosmopolitan, HighSnobiety, NYMag, Glamour, Vanity Fair, and WWD.

Although Affirm’s ad spend from March onward only comprises 10% of total spend volume compared to Klarna (57%) and Afterpy (34%), it holds its own on the digital ads front. Its biggest campaign in the last year came around the holidays, when it hired millennial actress Keke Palmer as the face of its “Gifts not Gotchas” ad campaign, featuring a couple video ads where Palmer reads from a scroll-like credit card contract, quipping, “if you don’t pay on time, we’ll take everything and you’ll have to go back to living with your parents.” 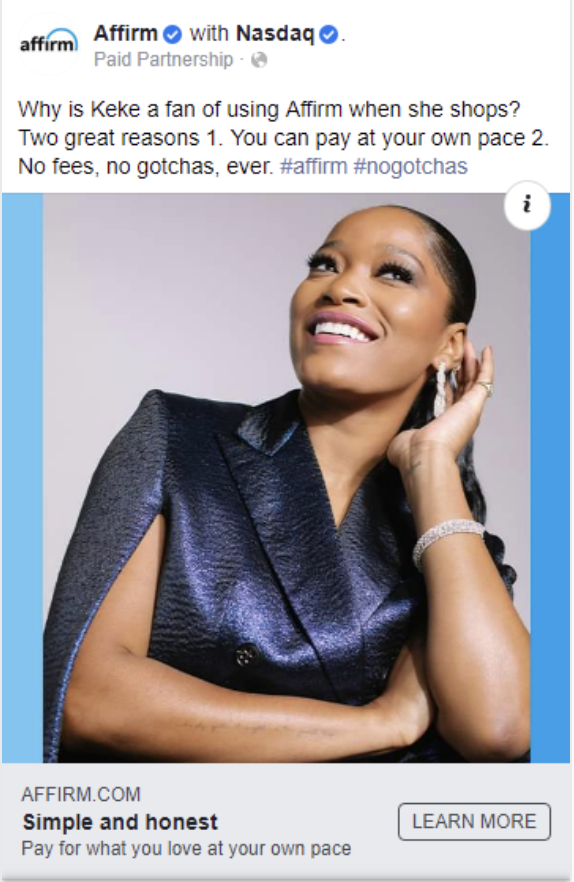 Overall, Affirm’s top two creatives since last March feature the likes of Palmer to the tune of $947K in Facebook ads, which both premiered in January. According to Pathmatics Explorer, Affirm first digitally advertised in 2020 beginning in August, with $30K worth of Facebook spend.

The company also had two spikes in desktop display ads in October ($162K) and December ($253K), with a major desktop video spike to fill the gap month in November. ($203K). The display ads focused on messaging such as, “Pay over time, with no late fees” and “Does your home need a revamp? These homeware sites let you pay with Affirm”. Meanwhile, the spike in video promoted Palmer’s Gifts not Gotcha ads.

BNPL platforms have addressed the need for more affordable retail payment plans for many Americans in the last year plus. They are perfectly suited to younger generations who are new to the workforce, and not making enough money to outright purchase pricey apparel, footwear, furniture, and tech.

We anticipate social media will also be a continued means to connect with Gen Z and Millennial consumers, who hold much spending power globally.

Do any of these ads from Affirm, Afterpay or Klarna make you want to buy now and pay later? Tweet me your thoughts @WilliamMerchan.

*Pathmatics began tracking Instagram data as of April 15, 2020. Advertising data for Instagram is not available in Pathmatics Explorer before this date.