This year, filing your taxes will involve jumping through even more hoops than usual with social distancing requirements, stimulus checks, and unemployment.

Tax season officially started on February 12, but TurboTax has already been ramping up for what's ahead, releasing over 100 new creatives since January 30. Let’s take a closer look at how Intuit has been marketing its tax preparation product, and how it stacks up to other brands in the tax prep space.

E-filing has been on the rise for a while now. In fact, a whopping 40% of U.S. taxpayers filed online last year — and over 40 million of them used TurboTax.

Intuit is betting on even more people filing online this year, spending $25.5 million on ads in the first two weeks of February — a 44% increase in spend from the same time frame last year ($17.6M). 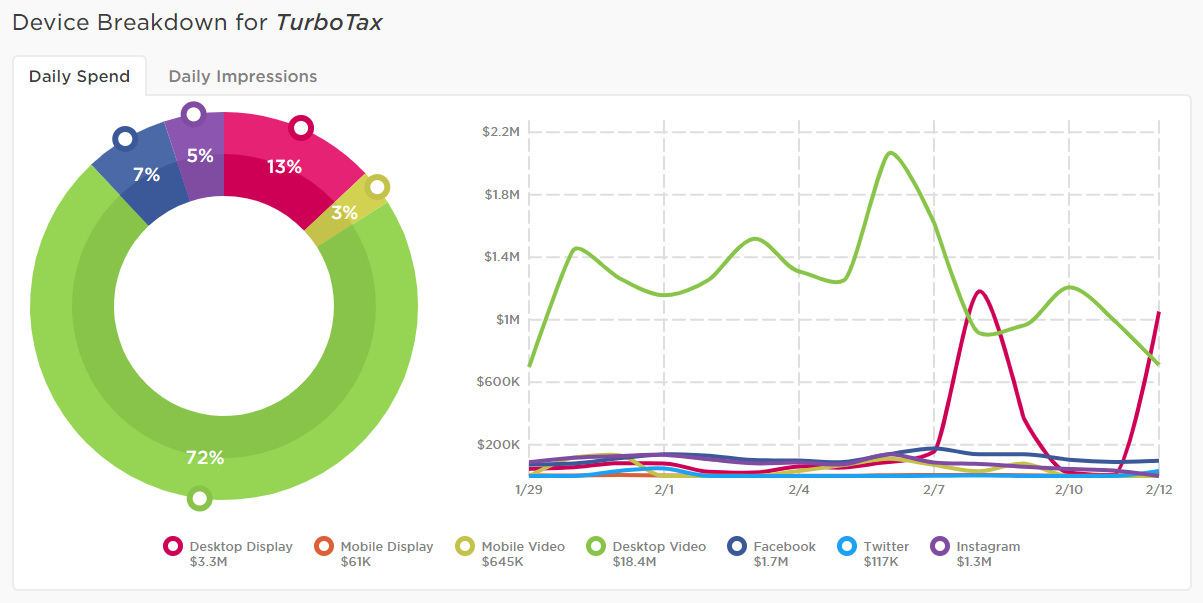 Nearly three quarters (72%) of TurboTax’s ad spend in February went to desktop video. That’s a big shift from 2020, when only about half (52%) of its budget went toward desktop video ads. Clearly, TurboTax sees video as an opportunity to target taxpayers who are working — or hanging out — on their couch.

TurboTax Brings the Experts to You

Speaking of hanging out on the couch, one of our favorite spots from TurboTax features an adult child who has moved back home during the pandemic — or maybe never left in the first place. As the son prepares a peanut butter and jelly sandwich, dad sarcastically asks TurboTax’s live tax expert, “Is my son still a dependent if he eats my food?”

As you can see, this ad is designed to call attention to TurboTax Live, which lets you file online with free expert advice — something we’re seeing TurboTax promote in a lot of its top creatives. It makes sense, in a way: many people’s tax situations will be more complicated this year, thanks to the pandemic, so they’ll appreciate the extra support.

So how does TurboTax’s strategy compare to other players in this space — namely, H&R Block and TaxAct?

For those of us who don’t want to fight with our taxes, H&R Block’s army of tax preparers stands at the ready. However, H&R Block’s messaging reflects a growing awareness that many people will be reluctant to set foot in one of its 12,000 brick-and-mortar tax offices this year.

Take a look at one of its top creatives from early February, which features a catchy musical number filled with singing and dancing accountants promising to “do your taxes virtually, snap a pic and leave the rest to me”: 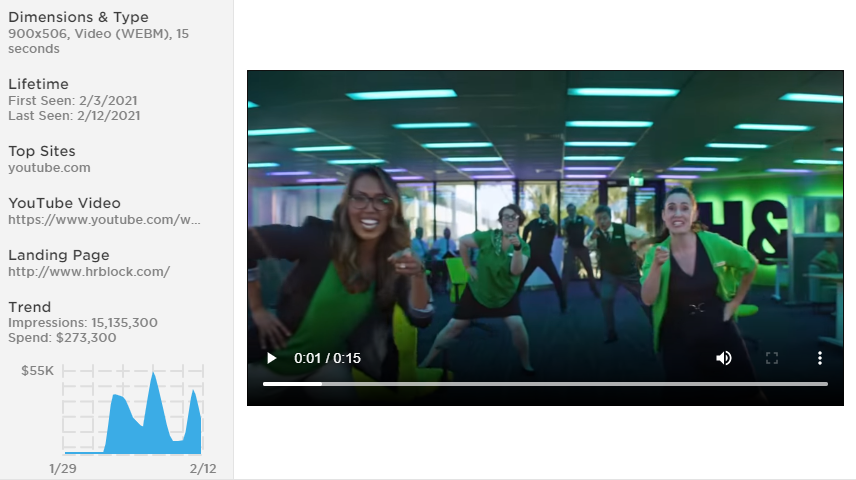 H&R Block has spent $6.2 million on digital ads so far in February — about a quarter of its competitor, TurboTax. Interestingly, H&R Block’s channel strategy looks a lot like TurboTax’s did last year. Desktop video (50%) and desktop display (28%) made up the largest portion of the tax prep service’s spend, with Facebook, Instagram, and mobile display rounding out the rest.

TaxAct Takes on the Big Guys

On par with H&R Block, the data shows that TaxAct has spent $6.9 million on digital ads since the beginning of February. TaxAct’s channel strategy looks pretty similar to H&R Block’s as well, with desktop video taking the top spot (41%), followed by desktop display (32%), Facebook (15%), and mobile display (10%). 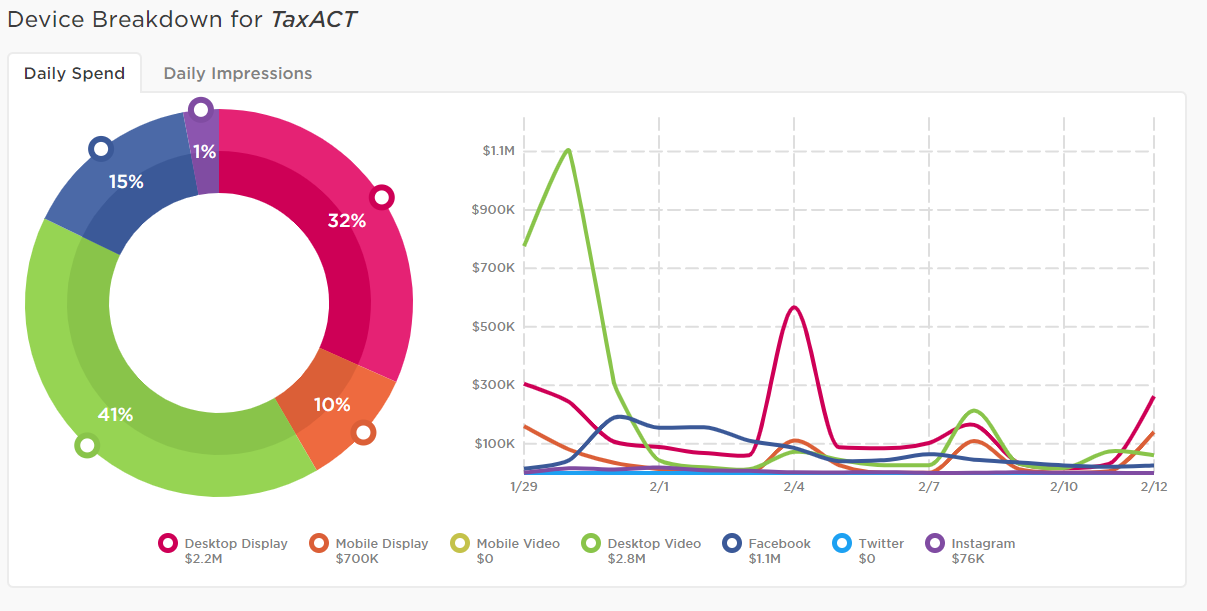 However, TaxAct is clearly trying to differentiate itself from the other top players in tax prep through its messaging. Like in this ad:

As you can see, TaxAct knows people love to root for the underdog. Some variation of this messaging appeared in most of its top creatives so far this month.

TurboTax has dominated the online tax filing game for some time, but the competition is heating up. While Intuit may be able to outspend its competitors, H&R Block and TaxAct’s strategies show that they’re well aware of their opponents. With such diverse spending strategies and approaches, it’s likely you’ll run into at least one of these ads between now and April 15.

Want to see more trends for tax season? Log into Pathmatics Explorer, or play around with our free insights dashboard.