Disney+ Marketing in 2020: Behind Disney Plus’ $525M Digital Advertising Strategy

Ask any Disney Plus subscriber and they'll tell you: the $7-a-month streaming service isn't just for kids.

There's something for the whole family from Star Wars and The Mandalorian to Marvel, Pixar, National Geographic, and Disney classics like Snow White.

And with everyone cooped up in the house, it's the perfect family-friendly, socially-distanced escape from reality.

Let’s go behind the scenes with Pathmatics marketing intelligence to see how Disney promoted its streaming service in 2020. Everything from the brand’s strategy to its top channels and advertisements is outlined below.

Disney Plus’ advertising strategy for 2020

Since its launch in November 2019, Disney has relied heavily on Facebook and desktop video to promote Disney Plus. Combined, these two make up 80% of the brand’s $525M ad spend for 2020. 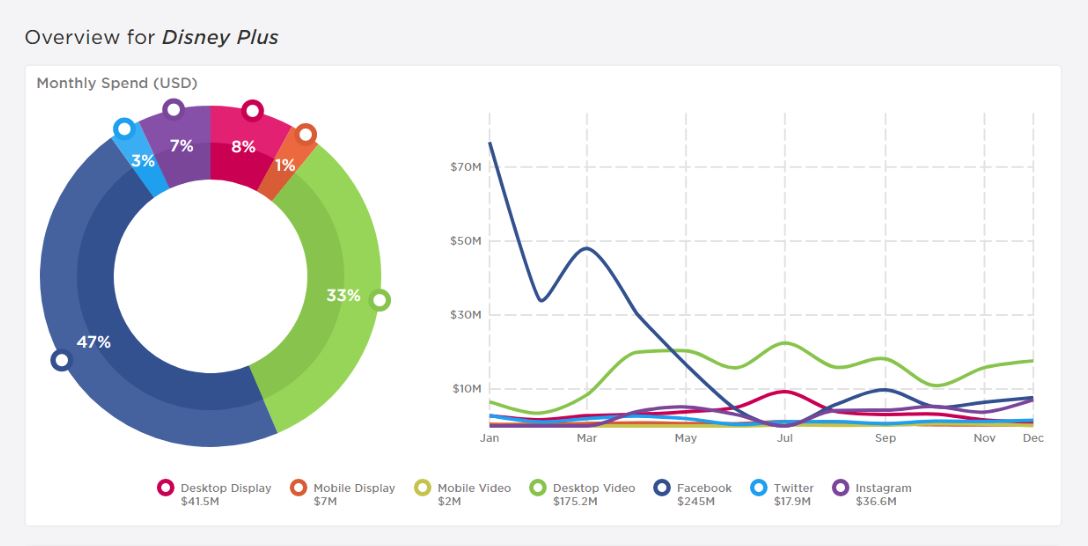 Early in 2020, Disney poured nearly all its digital advertising dollars into Facebook ads — over $70M in January alone. In fact, as we noted in a July Wall Street Journal article, "Disney was Facebook’s top U.S. advertiser for the first six months of 2020".

That all changed when Disney slashed its Facebook ad spend amid growing concerns about the platform's handling of hate speech and other objectionable content.

As it pulled back from Facebook, Disney shifted more of its budget toward desktop video ads, making up a third of its total ad spend for the year.

With its parks and stores closed due to quarantine, Disney bombarded potential customers with ads for its new streaming service. Facebook ads alone generated over 32B impressions, while desktop video and desktop display generated over 9B impressions each.

Most of Disney Plus' ads in 2020 appeared on Facebook and YouTube. This makes sense given that the brand is trying to reach parents of young children, as well as adults without kids. 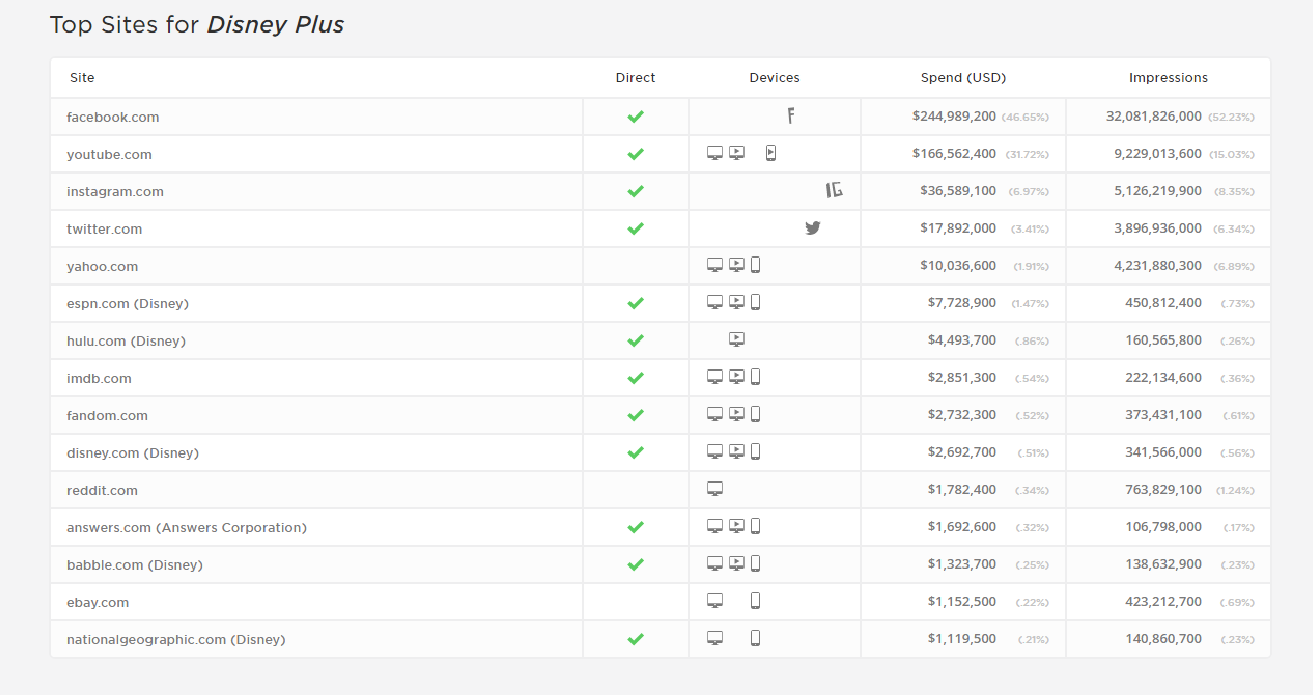 Instagram, Twitter, and Yahoo rounded out the rest of the company’s top placements, though these made up a much smaller portion of Plus’ site spend and impressions.

Pulling back the curtain on Disney Plus’ top creatives

Disney Plus promoted over 10K unique creatives in 2020, highlighting different shows and movies, features, and aspects of the streaming service.

Notably, several of its top ten creatives focused on the Disney+/ESPN+/Hulu bundle. With its “something for everyone” messaging and $12.99/mo. price tag, Disney is clearly trying to woo subscribers away from competitors like Netflix. It seems to be working: Disney expects its streaming service will have 230-260M paid subscribers by 2024.

We also spotted Baby Yoda among Plus’ top ads — no surprise there, given that Season 2 of The Mandalorian was one of the most awaited releases of 2020.

The rest of Disney Plus' top creatives spotlighted beloved TV shows and movies like Moana, The Lion King, and Black Panther that can only be found on Disney Plus.

In all, Disney did what Disney does best: understand its audience and create entertaining content that appeals to both the young and young at heart. That’s a lesson we can all apply to our own advertising strategies in 2021...and beyond!