In a typical pre-pandemic day, around 492,000 orders were placed on the GrubHub platform.

The food delivery boom can be attributed to people avoiding grocery stores and restaurants, as well as efforts by brick-and-mortar restaurants and retailers to provide safe, contactless options during the pandemic.

Food delivery services DoorDash, GrubHub, and Instacart have spent more on digital advertising than before lockdowns were in place, so let’s compare their ad spend since 2020 and where their peak spends lie.

Instacart went the opposite direction, opting to spend only 21% of its budget on Facebook and instead focusing on desktop video, with 56% of its budget going toward YouTube ads. Before the pandemic, video only made up a tiny portion of Instacart’s overall spend. Video ads started appearing in September, and by 2021 consumed the largest portion of Instacart’s budget, generating 197K impressions in March alone.

Perhaps Instacart, not worried about competing with meal delivery services like DoorDash and GrubHub, chose to take advantage of YouTube to elevate and differentiate its grocery delivery platform.

It’s also worth noting how much overlap there is between the top sites where these three companies chose to advertise. In addition to Facebook, Instagram, and YouTube, all three delivery services placed ads on twitch.tv, espn.com, hulu.com, accuweather.com, and msn.com — to name a few. 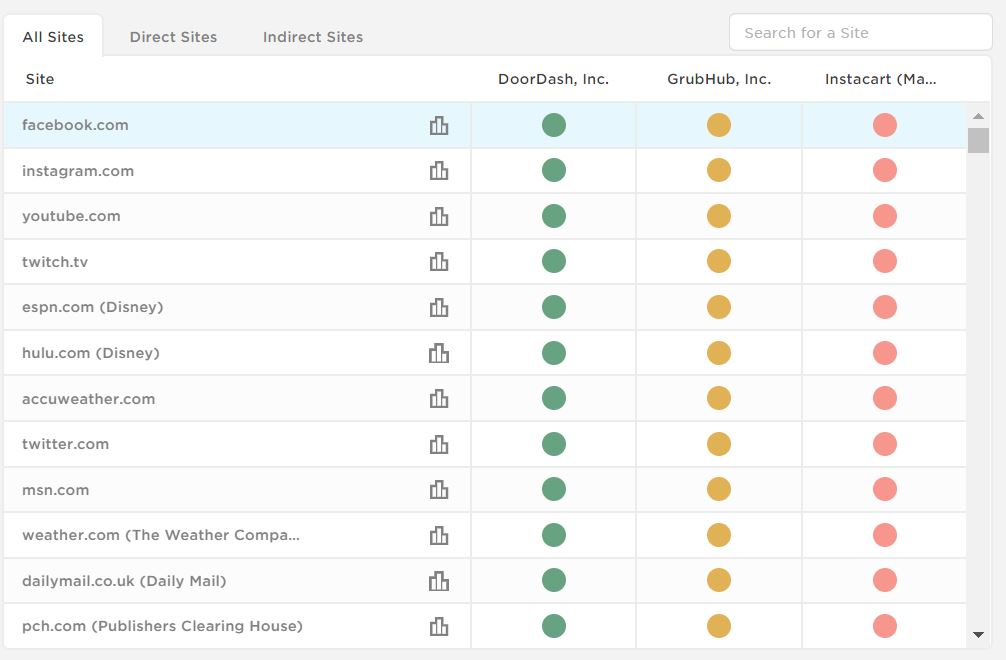 Now, let’s dive into the individual strategies of these three food delivery services. 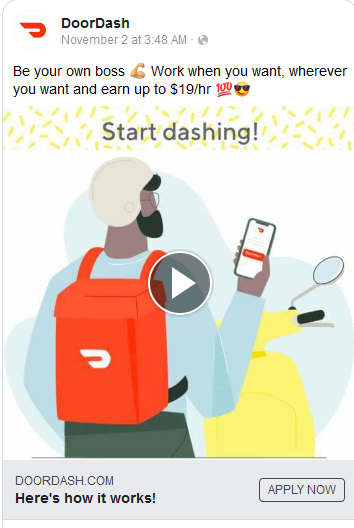 Eight of DoorDash’s top ten creatives during 2020 and early 2021 were aimed at enticing new drivers with promises of flexible hours and irresistible pay.

Ad spend nearly tripled from $1.6M in March to $4.3M in April as DoorDash ramped up its hiring efforts to meet hungry customers’ demand. By July, spending tripled again to $12.7M, peaking in September at $15.7M.

DoorDash’s spending gradually declined through the end of 2020 before ramping up again in early 2021 and hitting an all-time high of $20.5M in March. So far, spending has been on the decline heading into summer — something we saw from GrubHub and Instacart as well — though it remains significantly higher than pre-pandemic times. 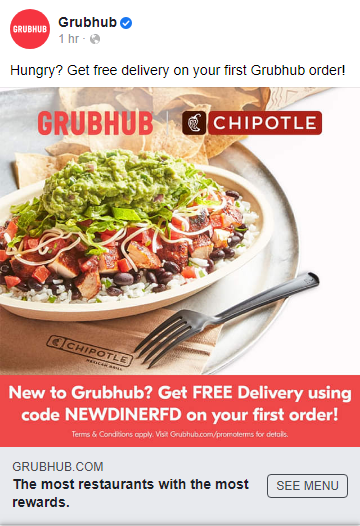 Unlike DoorDash, GrubHub was less concerned with recruiting new drivers and more focused on promoting deals like free delivery with your first order and GrubHub perks.

GrubHub’s top creatives highlighted specific restaurants available on the app, with mouthwatering images from partner restaurants like Chipotle and Dunkin’ Donuts. GrubHub’s CEO Matt Maloney noted in an October 2019 letter to shareholders that “online diners are becoming more promiscuous”, so it makes sense that the brand would try to woo customers away from competing apps by promoting its partnerships.

Following big brother DoorDash’s lead, GrubHub nearly doubled its spending between March ($1.9M) and April ($3.7M). But that’s where the two brands’ spending strategies diverged. While DoorDash was ramping up its advertising heading into summer, GrubHub pulled back in May, June, and July, bottoming out at $110K. And where DoorDash chose to cut back around the holidays, GrubHub’s spending grew steadily through the end of 2020 and remained high throughout the end of the year. Spending dipped slightly in January — though not nearly as dramatically as DoorDash’s — and topped out at $11.2M in February 2021 before beginning a steep decline.

Throughout 2020, Instacart was all about making grocery shopping safer and less stressful for families who had their hands full during the pandemic. Like GrubHub, Instacart frequently name-dropped its partnership with Walmart for same-day delivery of groceries, pantry staples, and personal care items.

The grocery delivery service tripled its ad spend between March ($513K) and April ($1.5M) as shoppers stayed home during lockdowns. Spending slowly declined throughout early summer as restrictions loosened, then gathered steam again heading into the fall. The brand ran several variations of an ad depicting frazzled parents flopping down on the couch with the Instacart app after their child went to sleep, which coincided with back-to-school season and another year of virtual learning for many families. As with DoorDash and GrubHub, Instacart’s spending hit its peak in the spring of 2021 and has slid heading into summer. 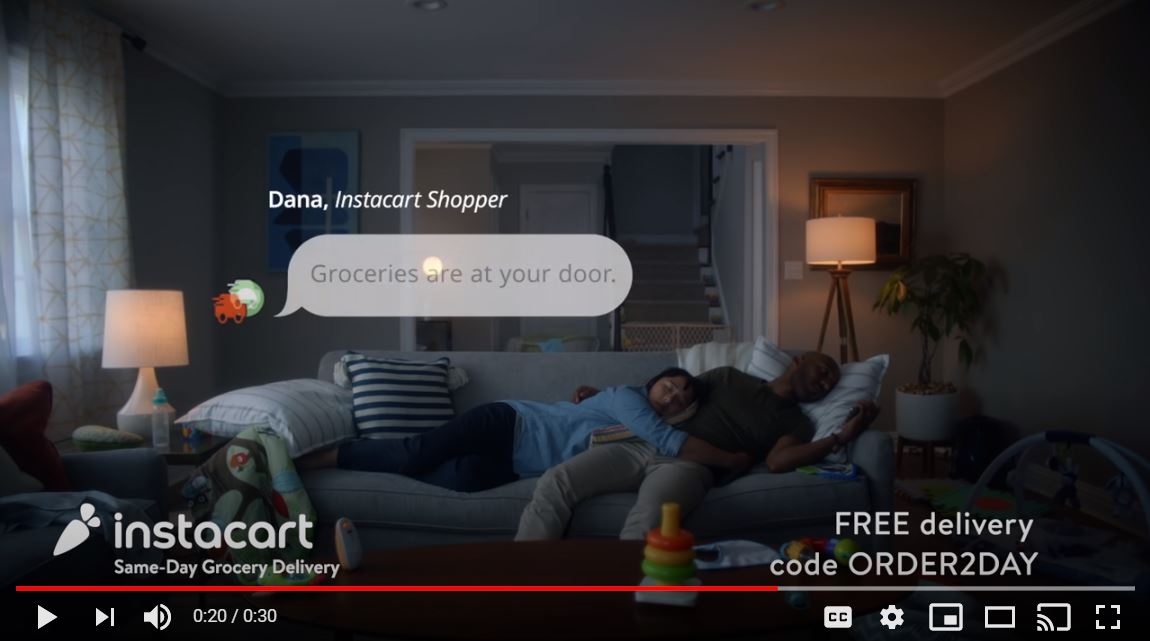 Food delivery services fared better than most businesses during the pandemic. Whether the unprecedented demand for these services will continue after COVID-19 or fade as restaurants reopen remains to be seen. All three delivery services seem to be approaching the summer of 2021 with cautious optimism, at least in terms of their ad spend. We’ll keep an eye on Pathmatics Explorer to see what these brands do next. In the meantime, let us know if you’ve spotted any of these ads in your feed!