New streaming brands such as Peacock TV, Discovery Plus, Apple TV+, and Disney+ have hit the advertising circuit heavily since launching in 2020 — but none (including usual heavy hitters Netflix and Hulu) have spent more on digital marketing in 2021 than HBO Max.

In fact, HBO invested 89% of its digital ad spend in January ($53M) in HBO Max ($47M). That’s nearly $20M more than the next highest ad spender of the month, LendingTree ($37M). It’s also more than what Amazon ($35M) spent on digital ads for its entire umbrella of subsidiaries, including Prime Video. And it’s even more than what Procter & Gamble spent last month ($32M) on its entire suite of CPG products.

Where is HBO Max’s hefty January digital ad spend going? It lies within the streamer’s feature film successes and a new lineup for 2021.

In lieu of red carpet movie premieres, movie makers have turned to streaming platforms to debut their newest blockbusters. One of the buzziest 2020 releases on Warner Brothers’ roster was Wonder Woman 1984, which officially launched on HBO Max in December. 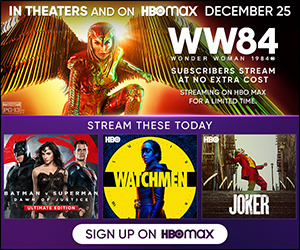 In a series of Facebook ads, HBO Max implores viewers to sign up now to stream the movie at no extra cost. The platform spent an estimated $1.8M on just one Facebook ad promoting WW84 in the first two weeks of January. This is in line with HBO Max’s overall ad strategy, as 75% of its ad budget has gone to Facebook in December and January. The ads must have worked, as WW1984 doubled the company’s number of total activations at the end of 2020 compared to three months earlier.

Other ads for WW84 appeared on Instagram (where HBO Max has only spent roughly $16M), and Reddit (where the platform has spent $865K) in the same timeframe. 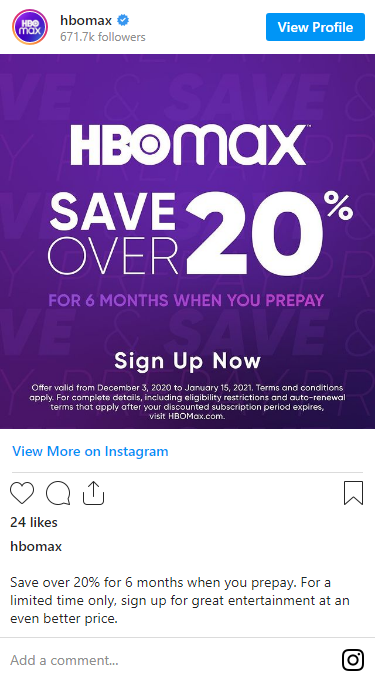 About 80% of U.S. consumers now subscribe to at least one paid streaming video service, up from 69% in 2019. Streaming services are capitalizing on these circumstances and reevaluating their trials and subscription package deals.

However, in early December, HBO promoted a new deal saving new subscribers more than 20% for six months if they prepaid for the service — valid through January 15th. HBO promoted the deal heavily on Instagram and Facebook, spending an estimated $729K on one version of the ad in December, and $437K on another version in January.

Cashing in on nostalgia

Hollywood has been cashing in on nostalgia as a surefire way of making profits. Beloved franchises from Animaniacs to Friends have either been rebooted or received a reunion special.

HBO Max is no exception. In anticipation of new reboot releases, HBO Max added the Gossip Girl series to its ad lineup in January 2021. The company had an estimated $145K one on Facebook ad in early January, with as much as $16K in spend per day.

The platform also promoted ads for 90s-favorite The West Wing, spending $91K on one Facebook ad in the first two weeks of January. Further, visitors to IMDb.com, yahoo.com, trulia.com and others were shown a display ad featuring Friends and the Fresh Prince of Bel Air with a call to action for viewers to “start streaming now.”

HBO Max has also recently announced fan-favorite oldies debuting new content on the platform include Dune, The Conjuring, Godzilla vs. Kong, and The Suicide Squad, among others.

HBO goes to the Max to contend with fellow streamers

HBO Max has been loudly laying the groundwork for its first full year by highlighting much anticipated upcoming content. As seemingly every streaming platform and TV station launches its own streaming site battle for viewers, we’ll be watching to see who comes out victorious (on our smart TVs, of course).

Did you start your new year with a new HBO Max subscription? What made you decide to sign up?