Following a record-breaking year for eCommerce, retailers are itching to get consumers to shop more than ever ahead of the holiday sale season. With a looming supply chain crisis, brands like Walmart, Kohls, Snapfish and more, have gone full throttle, encouraging consumers to buy earlier than ever this year.

Since mid-October, digital ads have been popping up in droves on social media and the internet with familiar shopping adrenaline-triggering words: “Black Friday, Cyber Monday, Christmas.” Every brand has to take a unique approach with its digital ads to cut through the holiday madness. We’ll take a look at the top holiday spenders and the strategies they’re using to make their messaging stand out.

Rolling Back Prices with Daily Deals Earlier Than Ever - Walmart

Walmart is known for its low prices, and everyone loves a good deal. Starting from the middle of October, Walmart focused on pushing their Black Friday sale across their creatives, spending over $1.7M to catch consumer eyeballs. Their strategy was focused on the brand’s “Deals for Days'' event, which delivered massive savings on a variety of popular items throughout the month of November. The event started during the first week of November and ads encouraged shoppers to take advantage of the exclusive deals earlier online.

The brand invested in a variety of creatives across different platforms including video ads for deals including $87 laptops and $99 robot vacuums. The top creative for the company was a digital display ad announcing the deals, which equated to $497K of their spending.

For brands looking to take a page from the Walmart playbook (and potentially avoid a supply chain bottleneck), consider offering exclusive deals before the holidays arrive.

The Value of Giving Back - Paypal

Everyone is striving to give back, and Paypal is using its digital ads to give people a shopping break from deals, and remind them of other ways to spend their money.  The renowned payment company focused on getting consumers to give back to charity this season with its “Paypal Donate” feature, which allowed users to easily donate to charities with the click of a button.

About 84% of people on Facebook use the social media platform to show support for different causes, and Paypal heavily invested in ads on the site to promote the feature. Paypal spent $987K of its overall strategy with its top creatives being Facebook ads ranging from $540K to $2.6K. The ads echoed the “doing good” sentiment framed with Paypal’s iconic blue coloring and depicted people coming together. To get customers motivated using Paypal to make a payment or donate, the company offered the chance to win $10,000 for every spend over $10. 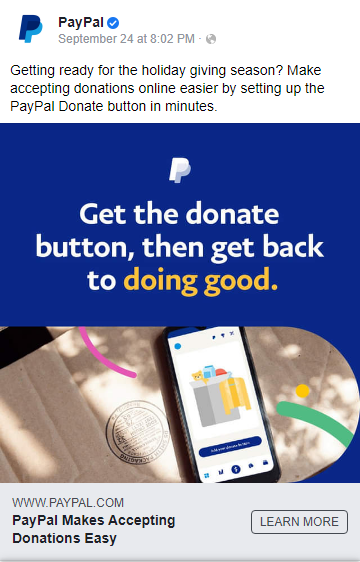 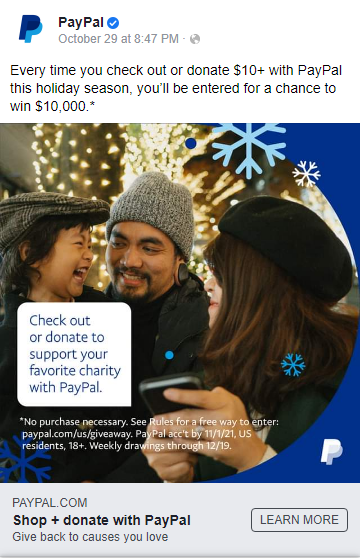 The American department store is beloved by many families for its diverse offerings, low prices and generous loyalty rewards. In a similar play to Walmart, Kohl’s used digital ads to get customers shopping early for the holidays, but with the bonus of earning Kohl’s Cash to spend on future purchases. For customers looking to spend their newly rewarded Kohl’s Cash sooner rather than later, the company advertised additional savings on various products including apparel, holiday decor and toys during the holiday season.

The company spent almost $1.2M on its holiday advertising with its top creative being a Desktop Video highlighting Kohl’s lowest prices of the season. The video’s call to action reminded shoppers to get on their holiday gifting with many low-priced options available at the department store, such as jeans for $14.99 or boots for $24.99. Other top creatives were Facebook ads, where Kohl’s focused on creative laydowns with key categories and holiday decor that Kohl’s cash could easily cover. 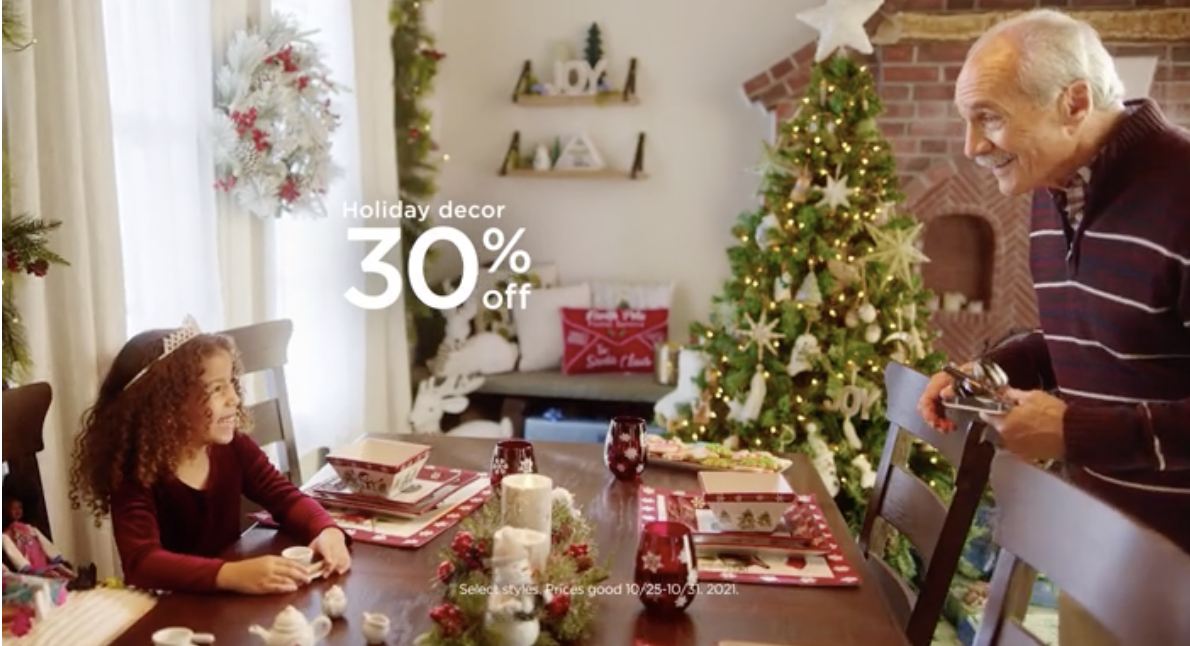 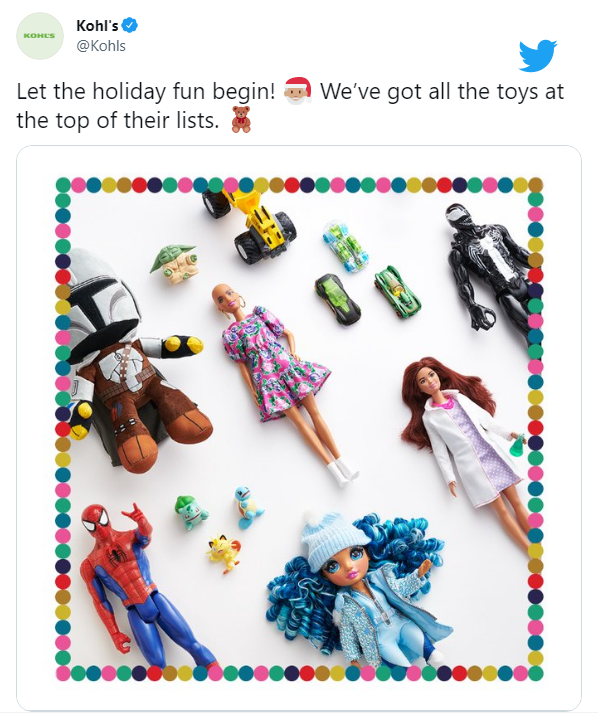 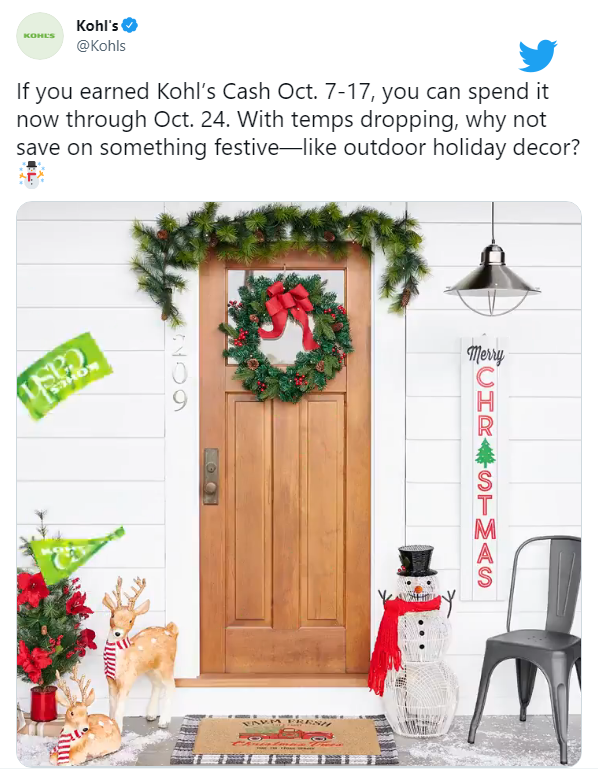 Nothing but the Hits - Disney

Cozied up next to a fire and trying to get in the holiday spirit, streaming platform Disney+ is using the feel-good season to promote some beloved movie classics.

As we’ve seen with streaming services riding the nostalgia wave, the entertainment giant put Disney+ in the forefront of their digital ads with nostalgic holiday titles such as Hocus Pocus and The Nightmare Before Christmas.

Disney spent $690K (10%) of its overall budget ahead of the holidays with a series of social media ads. The top creative was a Facebook ad featuring the Hallowstream Disney+ event and other top ads echoed the holiday fusion event. Need something to snuggle with while watching these comfort movies? Disney has you covered with a selection of festive homewares advertised in a Twitter ad.

For brands looking to tug at heartstrings like Disney, give the present of the past! Almost nothing creates emotional resonance with customers like nostalgia. When times are hard and the future is uncertain, many customers would do -or buy- anything to go back to a safer, simpler time. 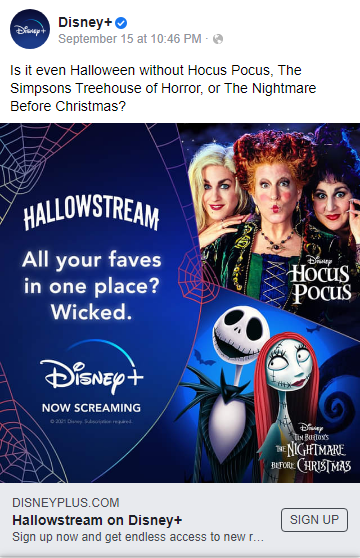 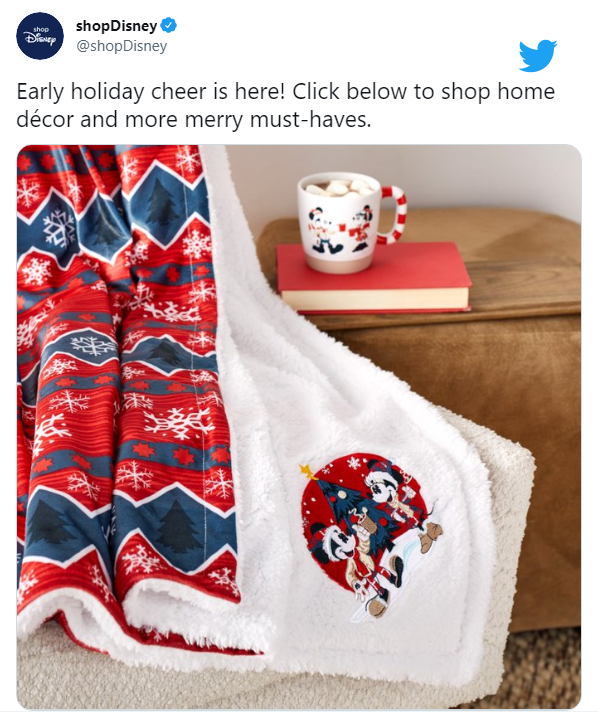 It’s the thought that counts during the holidays and Snapfish wants you to let the people in your life know you’re thinking about them with customized gifts.

The photo printing company centered its holiday digital ad strategy on promoting their customizable photo prints and Christmas cards. The company spent over $616K on Christmas advertising to remind customers to get their Christmas time-related cards and gifts created and sent ahead of the stressful holiday season.

The company took a social media approach with their top creatives consisting of Facebook ads promoting their custom Christmas and Hanukkah cards. The creatives brought a splash of visual holiday cheer to consumers’ feeds by showing colorful holiday card options among a white woody background with mistletoe, pinecones and Christmas tree branches.

For brands with seasonal or customizable offerings, stand out from the crowd by echoing Snapfish’s time-appropriate strategy focused on spreading holiday cheer 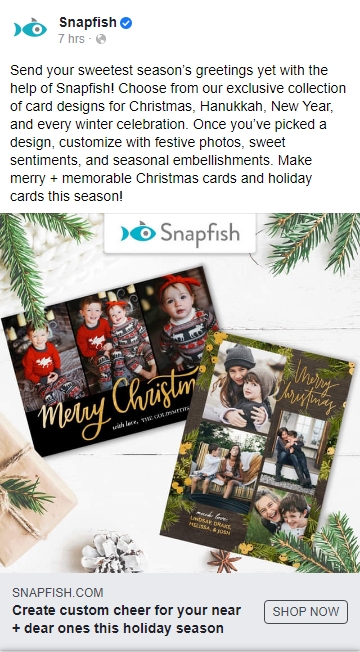 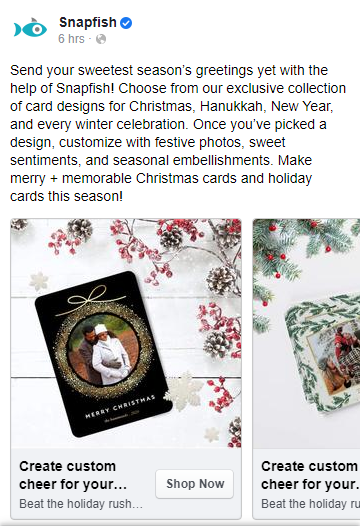