Nothing screams "summer" quite like an ice-cold beer or refreshing rum punch —  and this year, vaccinated Americans will finally be able to share a drink with friends.

With bars reopening and summer barbecues back on, global beverage sales are projected to increase 3% in 2021.

So how are big beverage brands preparing for a post-vaccine summer? Diageo, Bacardi, and Brown-Forman have all increased spending in the last year, so let's take a closer look at their advertising strategies.

Beverage companies were on a bender last year, with liquor sales seeing their biggest dollar increase on record in 2020. Perhaps hoping to keep the party going, all three brands have increased their spending since vaccine rollouts started in December. 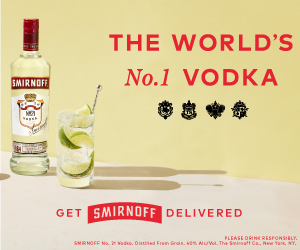 Diageo has outspent its competitors throughout most of 2020 and all of 2021. This makes sense given that Diageo — whose brand portfolio includes Crown Royal, Smirnoff, and Captain Morgan, among others — is significantly larger than both Bacardi and Brown-Forman in terms of net sales.

Although Diageo spent the most overall ($78.7M), Bacardi has seen the largest increase compared to the same time frame last year. Brown-Forman (the brand behind Jack Daniels, Woodford Reserve, Finlandia, and Chambord) outspent Bacardi throughout most of 2020. Then in December, Bacardi overtook the Kentucky-based whiskey and wine company. So far in 2021, Bacardi has spent over $5 million more on digital advertising ($23.6M) than Brown-Forman ($18.3M).

The biggest spikes in spending occurred in December 2020 and the spring of 2021. Notably, the increase in spending around March coincides with a NielsenIQ report that retail alcohol sales fell for the first time since the pandemic started. This doesn’t necessarily indicate a downturn for the beverage industry, though. If people are buying more drinks at bars and restaurants, it makes sense that sales at grocery and liquor stores would slide.

While Diageo and Bacardi have both increased their spending heading into summer, Brown-Forman seems to have hit a slump. In fact, the brand’s spending in May 2021 was the lowest it has been since the pandemic started. However, things are trending upward again in June and July.

The hangover begins for desktop video

Desktop video advertising spiked across all categories of consumer packaged goods (CPG) during the pandemic, and alcoholic beverages were no exception. However, that trend seems to be cooling off as summer heats up.

Compared to last year, Diageo pivoted about 15% of its budget away from desktop video and funneled more capital into Facebook. Only 7% of its budget this year has gone toward desktop video, with most of its digital ad dollars split between Instagram (43%) and Facebook (41%). 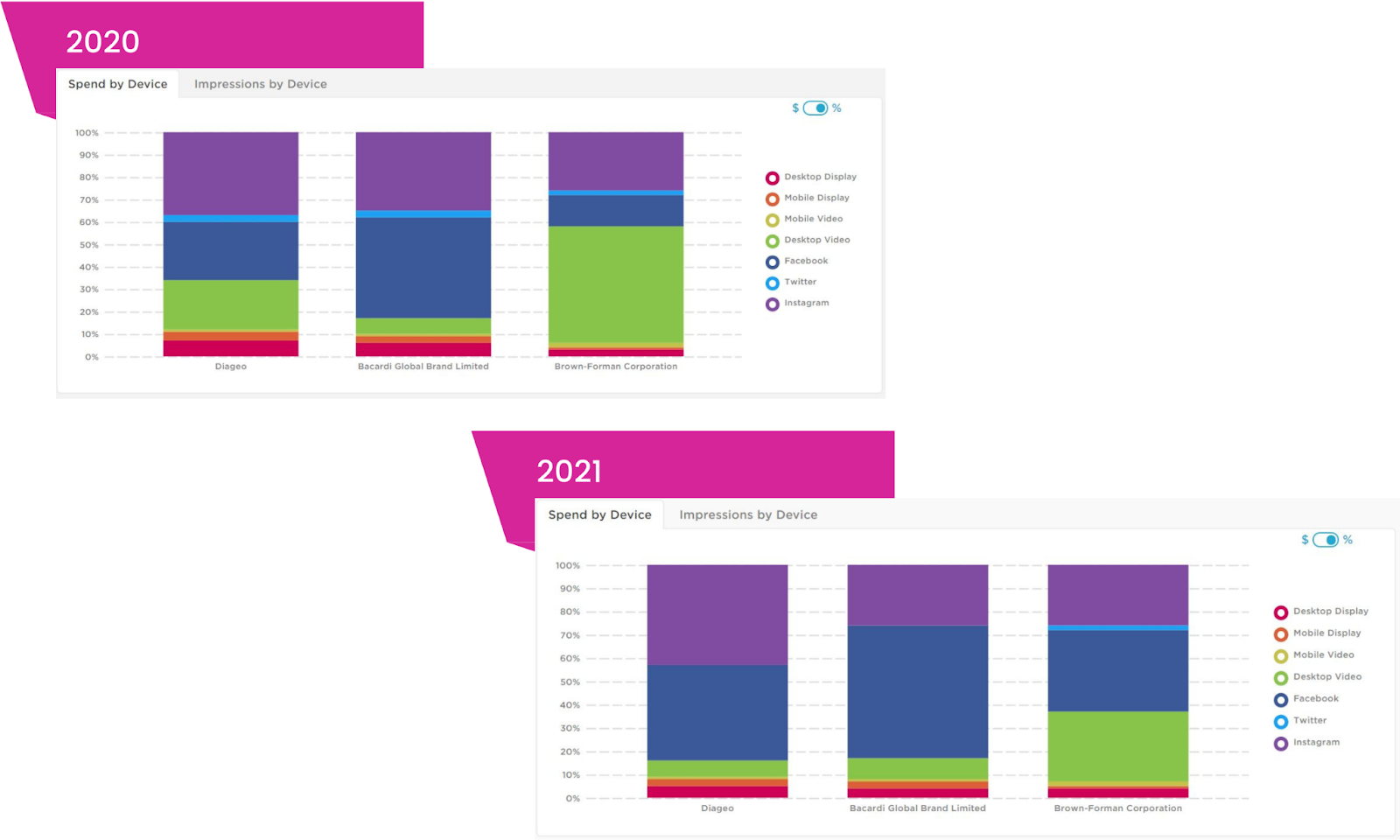 Like Diageo, Brown-Forman has pulled back on desktop video ads this year and taken a more balanced approach wit

Bacardi’s ad mix looks pretty much the same as it did in 2020, with the majority share of its budget going toward Facebook ads (57%) followed by Instagram (26%) and desktop video (9%). 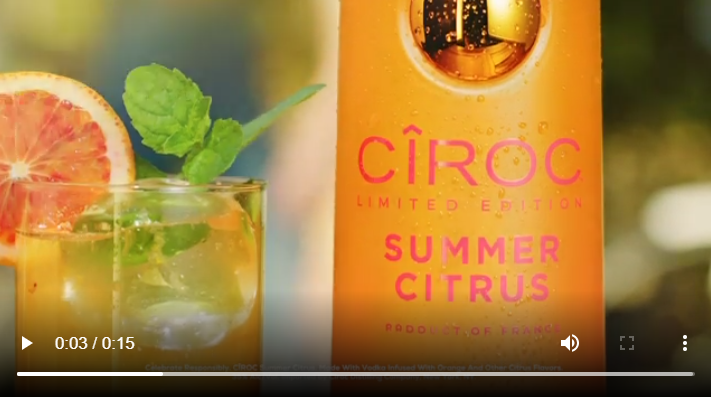 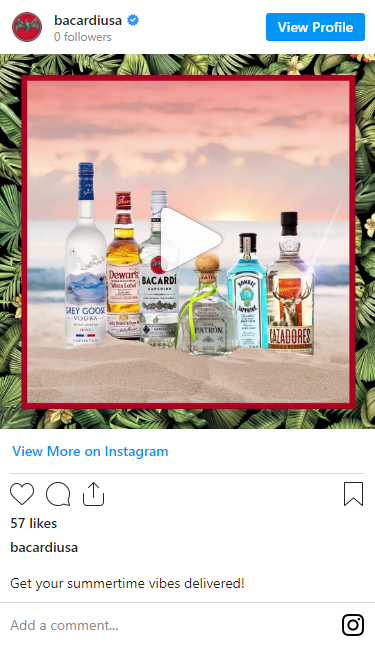 The pandemic has drastically altered Americans’ drinking habits. Rather than run to the liquor store, many consumers are ordering adult beverages online and having them delivered. These habits are unlikely to change now that drinkers have experienced the convenience of alcohol delivery, and both Diageo and Bacardi’s ads are reflective of that.

Likewise, many people will continue stirring up cocktails in their kitchens — a trend that took off during stay-at-home orders. But as consumers mix up more drinks at home, they are also eager to try new things. Top creatives in 2021 feature new drink recipes and limited edition flavors to keep it interesting, as well as tried-and-true favorites to bring to summer events. 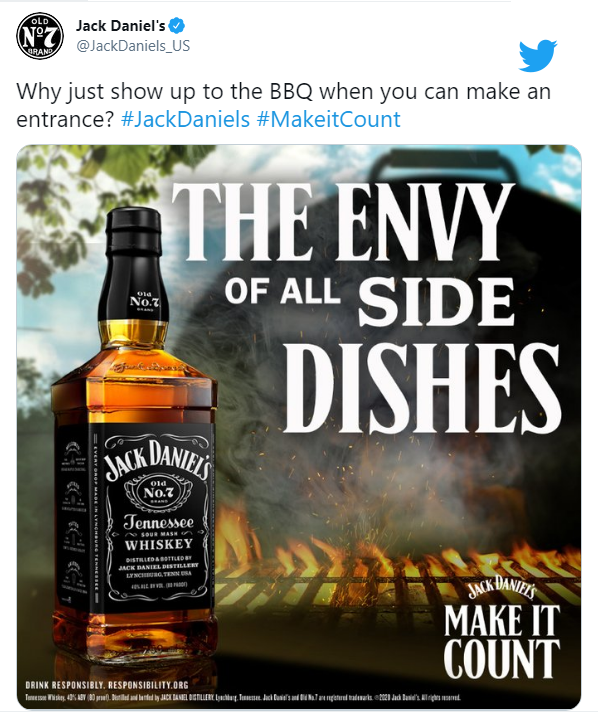 For now, it seems that beverage companies see the glass as half full. Sales are expected to pick up now that bars and restaurants have reopened, and beverage brands are spending more on digital advertising than they did last year. But rather than rely on the same old tactics they were using before the pandemic, the largest companies are experimenting with different formats and messages to cater to changing demands.