How Health Insurance Companies are Advertising The COVID-19 Vaccine

Early in the pandemic, insurance companies saw their margins increase as patients canceled elective procedures and didn’t use their benefits. According to the Journal of the American Medical Association, United Healthcare Group’s net income in Q2 nearly doubled from $3.4 billion in 2019 to $6.7 billion in 2020. Likewise, Anthem’s net income grew from $1.1 billion to $2.3 billion during that time period.

As the pandemic drags on, though, margins are shrinking as COVID- related costs for testing and treatment gobble up profits. Likewise, many people who delayed care for other conditions last year may eventually seek out medical attention — and they’ll likely be sicker when they do.

As you might expect, all of this has created a tremendous amount of uncertainty for insurance companies.

To explore these questions, we looked at data from three of the largest insurance companies in the US: UnitedHealthcare, Anthem Blue Cross, and Humana. 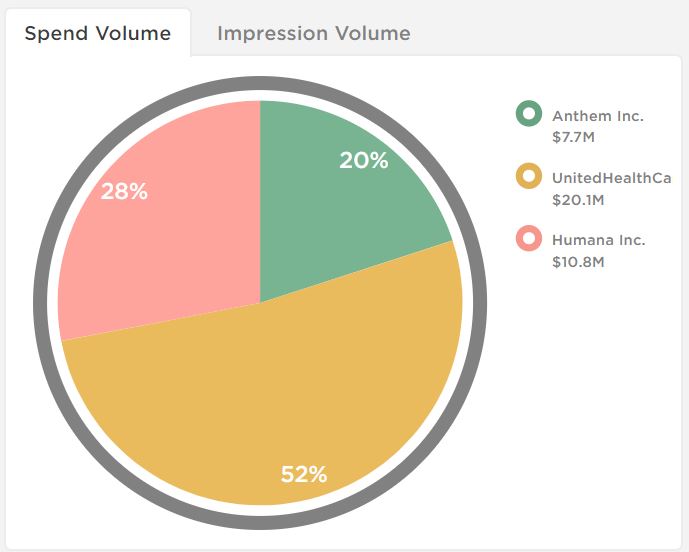 While these three companies represent a small fraction of the more than 900 insurance companies offering coverage in the US, they account for more than a quarter (28%) of the total market share. Together, they insure 126.5 million Americans.

United Healthcare split its budget evenly between Facebook (40%) and desktop display (37%) with a smaller portion of its spend allocated toward desktop video (17%).

Unless you work for one of these companies, you might assume that advertising spend would have correlated with vaccine rollout. After all, the vaccine has been proven to prevent severe disease, which in turn reduces hospitalizations (and costs to insurance companies).

You can see that spending for all three companies stayed relatively steady in the months between April and September. Then, things start to ramp up with the majority of budgets being spent between October and December. That’s not exactly surprising, given that these periods of high spending coincide with the Medicare open enrollment period of October 15 – December 7.

By January, spending for all three companies returned to previous levels in spite of the vaccine rollout. There's no indication that these insurance companies were putting significant dollars behind advertising the vaccine, so we took a closer look to see if any vaccine-related messaging appeared in their top creatives. 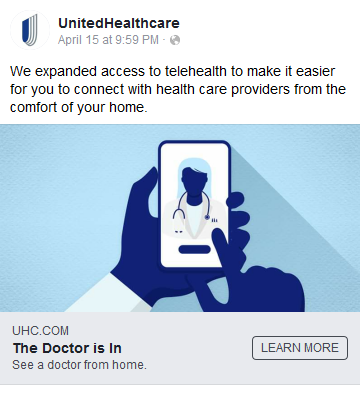 The first thing we noticed is that none of United Healthcare’s top creatives mentioned the vaccine or COVID-19 directly. In fact, Pathmatics Explorer didn’t spot a single mention of the vaccine in the 751 creatives United Healthcare promoted in 2021. Nor did we see any ads promoting other preventive measures like hand washing or mask wearing.

In addition to COVID-19 related coverage, telehealth benefits in particular are driving the increase in enrollment. Ads like the one shown here focused on expanded access to telehealth services —  something we saw from Anthem and Humana as well.

Like United Healthcare, Anthem pushed its Medicare plans heavily. However, four of its top ten creatives during this time period directly mentioned the vaccine. Ads were targeted at different brands under the Anthem umbrella, such as Amerigroup and Anthem Blue Cross Medi-Cal, and encouraged customers to activate their online accounts in order to receive vaccine updates. 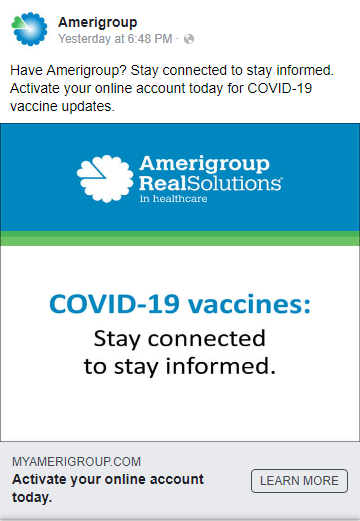 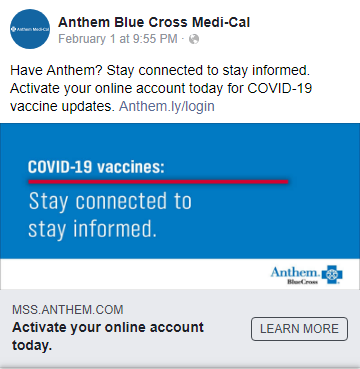 In addition to the COVID-19 vaccine, Anthem also used digital ads to encourage its members to get vaccinated against the flu, promoting creatives for the shot heavily during flu season. Clearly, Anthem sees vaccines as an important part of its preventive care services. 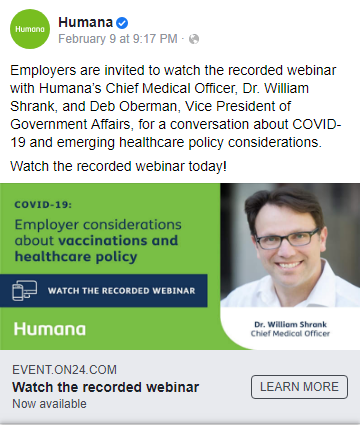 Although Humana didn’t promote the vaccine directly to its members like Anthem did, Pathmatics Explorer did pick up a campaign targeting employers with information about vaccines and policy considerations. The timing of this campaign in February makes sense given that vaccines were starting to become more widely available, leaving employers with questions about the legality (and practicality) of mandating that their workers receive the jab. Why Humana chose not to promote similar information for its members is a mystery.

Humana did, however, encourage people to get medical care during COVID-19. Its top creative in the last year, which received $955,000 in spend and generated nearly 114 million impressions, uses the message “Don’t put your healthcare on hold” and directs people to a landing page where they can shop Humana plans. 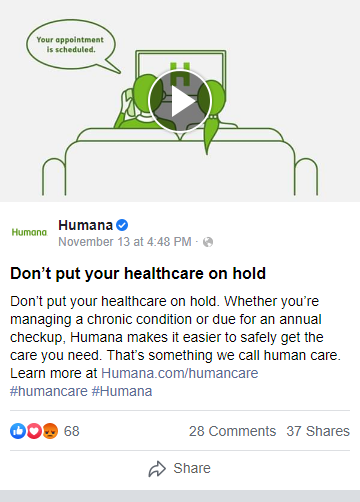 Notably, Humana was the only one of the three insurers to focus on mental health in its top creatives — living up to its tagline “Human Care”.

As vaccines become more widely available, experts caution that getting information out to skeptical consumers will be of the utmost importance. Insurance companies will certainly play a role in this effort, but the degree to which they participate will obviously vary widely.

How it will play out over the next few months is anyone’s guess. Will United Healthcare eventually get on board and start promoting the vaccine to its members? Will Anthem and Humana ramp up their vaccine messaging as the rollout accelerates? We’ll keep an eye on Pathmatics Explorer to find out. In the meantime, let us know if you’ve seen any of these ads in your feed!