After seeing its revenues double during the pandemic, the app was valued at $6.5 billion in its initial public offering (IPO). Duolingo has more than 500 million downloads and is the top-grossing education app on both Google Play and Apple's App Store.

So it may come as a surprise to learn that Duolingo only spent $1M on digital advertising in the 12 months leading up to its IPO. Which led us to wonder: Are language learning apps missing out on an opportunity to advertise more widely on digital? Let’s take a closer look at what the data in Pathmatics Explorer is telling us. 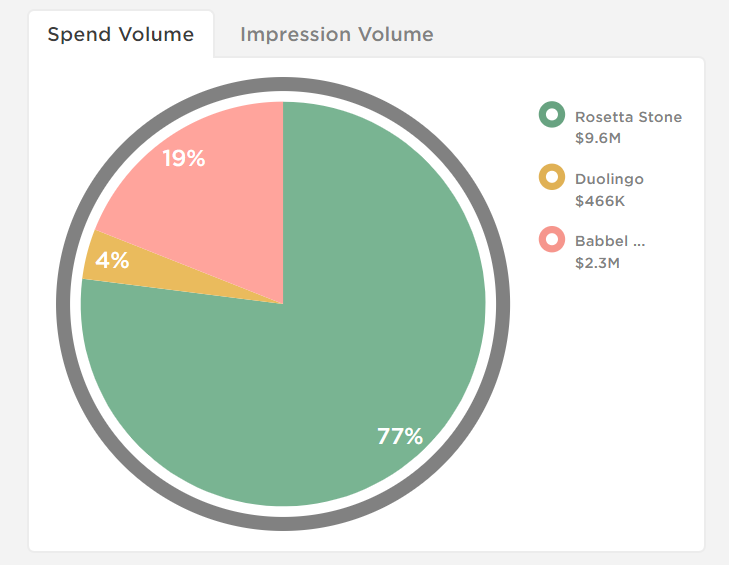 With all the talk about online learning, you might expect to see language apps taking advantage of digital advertising. We certainly did.

But as we mentioned above, Duolingo is barely advertising at all on digital, spending only $466K on advertising since the start of the 2021.

To put that in perspective, Rosetta Stone has spent $9.6M in the same time period. While you might think this would have to do with the relative size of both these companies, Duolingo is actually much larger than Rosetta Stone in terms of revenue. Babbel, which is the second largest language app by revenue (behind Duolingo), is also outspending Duolingo at $2.3M so far this year.

Both Duolingo and Babbel are spending less than they did during the same time period last year, which leads us to wonder if they’re missing out on a bigger opportunity to invest in digital.

A video is worth a thousand words

Speaking of opportunities: With more than 22.8 billion monthly visits, YouTube is the most powerful advertising channel right now. More people visit YouTube in a month than Facebook, Instagram, or Twitter, making it an obvious choice for digital advertisers wanting to get eyeballs on their ads.

Over the last 12 months, brands across all industries have spent nearly $11 billion on YouTube ads, garnering more than 875 billion impressions! Zooming in on the software category, we can see that YouTube was the #2 most popular site to advertise on. Given its popularity, we would expect to see language learning apps advertising heavily on YouTube. Not so much.

Perhaps this has to do with the cost of impressions. YouTube accounts for 23% of Duolingo’s total ad spend, but generates only 11% of impressions. Other channels offer cheaper impressions; however, that doesn’t necessarily mean they’re a better value.

So where are these apps spending? Rosetta Stone is devoting the majority of its budget (73%) to Facebook, while Duolingo is mainly advertising on Instagram (42%) and Babbel is focused on desktop display (42%) and Facebook (33%). 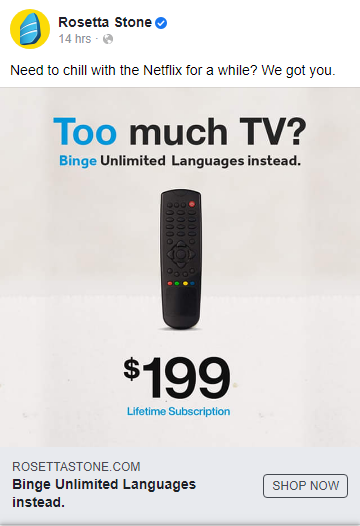 While most brands are ramping up ad spend as the pandemic fades, language learning apps are actually pulling back.

Take Rosetta Stone for example. The award-winning app has slashed its budget dramatically since the start of the year.

We're guessing Rosetta Stone’s line of thinking looks something like this: With vaccination rates increasing, people are coming out of lockdowns and spending less money on at-home activities like learning a language. Likewise, schools and universities are reopening for in-person language classes.

Perhaps Rosetta Stone, Duolingo, and Babbel are trying not to get ahead of themselves. But with airlines advertising big deals for travel, we'd expect to see language apps jumping on board as well. Is this a missed opportunity? Only time will tell.

With travel plans nixed and nothing to do but stay home, it's no wonder more people chose to download language apps during the pandemic.

But their continued popularity is far from a given. In its IPO filing, Duolingo cautioned that the pandemic growth spurt might not last.

Some factors will be out of these companies’ control, as was the case when the Duolingo app was removed from Chinese app stores shortly after the IPO.

But a lot of it will come down to strategy and whether app companies are able to capitalize on new digital advertising opportunities that come their way. Fortunately, learning new things and embracing different perspectives is something language learning apps should have a leg up on.