Paramount+ Outspends Competitors Ahead of Launch

The streaming wars are raging in 2021 and the arena is stacked with old and new players. Companies are leaning on digital ads to entice new subscribers with exclusive content, new releases, and beloved classics.  Paramount+ is the latest streaming company to debut in 2021, replacing CBS All Access as the dedicated streaming platform from ViacomCBS.

As the streaming landscape continues to be competitive, new entrants and standbys alike are battling more than ever for viewers' attention and wallets. So what does it take to digitally advertise the launch of a streaming service? We’ll break down Paramount's digital ad spend strategy leading up to the launch and see how this strategy stacks up against its competitors.

Paramount+’s biggest digital ad investments were in its desktop display and video ads with $4.4M(29%) and $5.2M (34%) respectively. The platforms biggest video ad campaign depicted the meeting of the studio’s fan-favorite characters and talent (Dora the Explorer, RuPaul, Trevor Noah, Young Sheldon, etc.) drawn together on the summit of the iconic Paramount mountain. The campaign established the company’s message about the service, enticing viewers to subscribe for a “mountain of entertainment.”

The campaign debuted in late January and commenced the company’s desktop video ad spend at $27K. The spend was gradual until it reached a peak of $403K on February 9th. The spend dipped back down to $61K later that week and remained gradual until ramping up the week before the launch with $692K and landing on $744K the day of the launch.

Desktop display ads followed a similar pattern to desktop video with spend remaining gradual and then increasing from February 23rd at $12.5K to $194K on February 26th. Paramount+’s desktop display ads ultimately surpassed its spend on video with the budget increasing to $1.1M on February 27th. The spend sharply dipped back down to $118K ahead of launch on March 2nd, but then sharply increased to $1.7M on launch day March 4th. Paramount+ tied its display ad content to its social media ad content with its top creative estimated at $806K promoting the exclusive Spongebob movie: Sponge on the Run. Other top display ads echo the platform’s “mountain of entertainment” message. 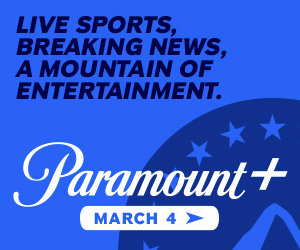 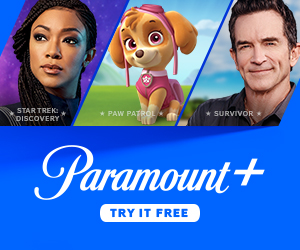 A report found that social media engagement for entertainment brands had decreased by 26% in Q4 2020. Paramount+ took notice and spent about $5M on social media ads leading up to the platform’s March 4 launch, accounting for 31% of its total budget. Facebook accounted for 22% ($3.3M) of overall spend with Instagram coming second at 9% ($1.4M). 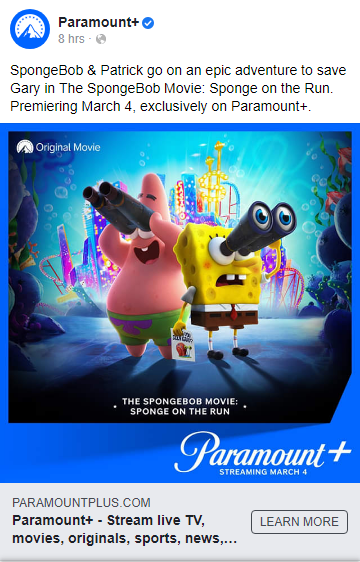 On January 24, Paramount+ spent $4.6K on Instagram, eventually capping at $17K the week before Valentine’s Day before returning to average spend. Paramount+ then increased Instagram spend again this time by 1,425%, going from $4K on February 22 to $61K on February 27, before peaking at $517K on launch day.

Paramount+ didn’t start spending significantly on Facebook until the week before the launch, with $111K toward ads focused in New York City and the Texas region. The spend gradually rose until hitting its peak with $1.2M on launch day.

Coinciding with the launch, The Spongebob Movie: Sponge on the Run premiered on March 4th. Spongebob is one of Paramount’s most beloved franchises and the move corresponds with the larger trend of the entertainment industry cashing in on nostalgia. The top Facebook creative promoting the movie was $314K and Spongebob constituted four of the Top 10 creatives.

We looked at some streaming companies that launched in 2020 (HBO Max, Discovery Plus, and Peacock) and analyzed the month leading up to their respective launches to get a better understanding of how Paramount+’s digital ad launch strategy was similar.

War of the Streamers

CBS All Access laid the groundwork for Paramount+’s dynamic reincarnation. Like HBO Max, Paramount+ enters the streaming wars as the latest competitor to be an evolved version of a previous streaming company.

When it comes to launching a streaming service today, the landscape shows that competitors should focus spending on desktop and video ads, leverage social media to pulse messaging during peak times to drive interest, and to make a big dedicated push the day before launch to draw as many eyes as possible for a successful launch day. We’ll keep our eyes open for new challengers and if any existing platforms will be repackaged into something new.