Aussies and Kiwis unite! We're thrilled to announce our expansion into Australia and New Zealand, and the launch of Facebook data for these regions.

Brands, publishers and agencies now have direct access to digital advertising insights previously unavailable Down Under

Auckland, New Zealand / Sydney, Australia, June 28 2021 – Pathmatics, the digital marketing intelligence platform used by the likes of Nestle, MediaCom, Target, and Reddit, today announced its expansion into the Australian and New Zealand markets. Brands and marketers using Pathmatics will now have greater visibility into how their competitors are spending on ads across digital, video, display, and mobile, and for the first time, have access to Facebook advertising intelligence.

Since its launch in 2011, Pathmatics has become a vital resource for the digital marketing industry. With access to the advertising creatives, spend and impression data, and path from publisher to viewer, Pathmatics empowers brands and agencies to minimise waste from their budgets, understand their competitive landscape, and make better marketing decisions.

Eugene Du Plessis will lead the Pathmatics ANZ presence as Regional Director, joining from Nielsen Australia, where he spent the last six years. Eugene will focus on growing the company’s local presence.

Pathmatics co-founder and CEO Gabe Gottlieb says: “As the world increasingly shifts to digital, it’s imperative that companies can quickly understand the strategies of their competitors, and the greater digital marketing ecosystem. Until now, there has been a lack of transparency into Australia and New Zealand’s digital and social ad landscape, so we’re thrilled to be giving marketers and brands with a presence in each market the ability to make more informed decisions about how they invest their advertising dollars.”

Eugene du Plessis, Regional Director also commented: “I’ve worked in the ad space for many years, and one of the top demands I constantly hear from brands is having easy access to data insights. Pathmatics not only offers unmatched insights, including estimated ad spend, across industries, but it is simple enough that anyone in the team can use it. Within seconds, marketers can assess the strategies of their competitors, like spend, impression, creative, and messaging choices. It’s really powerful insights that add immense value.

“I’m pleased to be a part of the team here and I’m looking forward to helping customers harness the platform’s full potential.”

This will be the first time Pathmatics, and its entire suite of features including Facebook advertising intelligence, will be available direct to brands in Australia following a previous alliance with Nielsen.

The expansion Down Under comes at a landmark point in Pathmatics’ growth journey, having merged with SaaS mobile analytics company Sensor Tower in May to offer the largest footprint of digital advertising and mobile intelligence in the enterprise market.

As part of the company’s launch, Pathmatics has revealed the top advertisers in Australia over the past 12 months, with Procter & Gamble, Hungry Jack’s and SingTel (& Optus) taking out the top spots, all spending an estimate of more than $24 million across Facebook and Google ads. 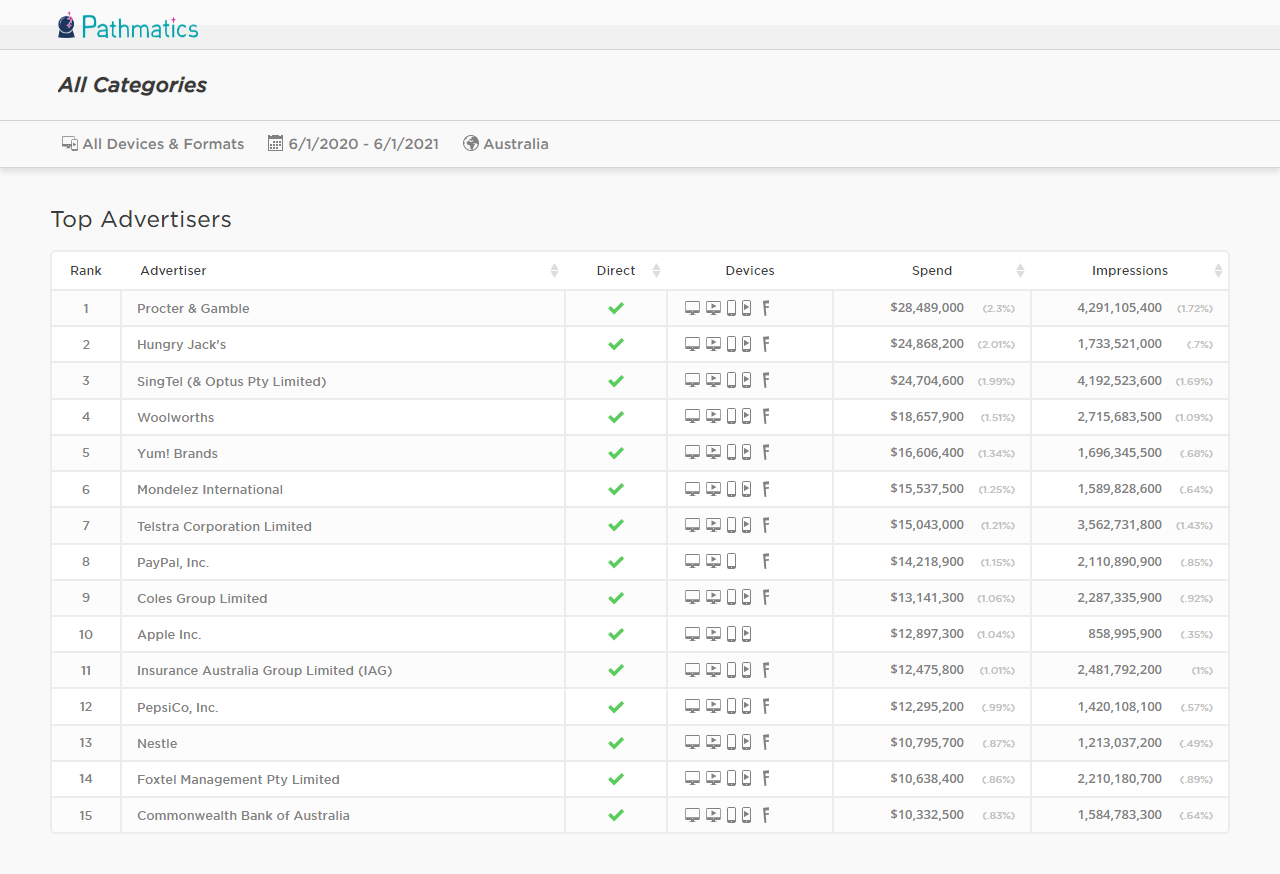 * Procter & Gamble: owner of brands including Pantene, Oral B, Olay, Vicks, and more

As part of the company’s launch, Pathmatics has revealed the top advertisers in New Zealand over the past 12 months, with Procter & Gamble, Warehouse Group Limited and Mondelez International taking out the top spots, spending a combined estimate of nearly $9 million across Facebook and Google ads. 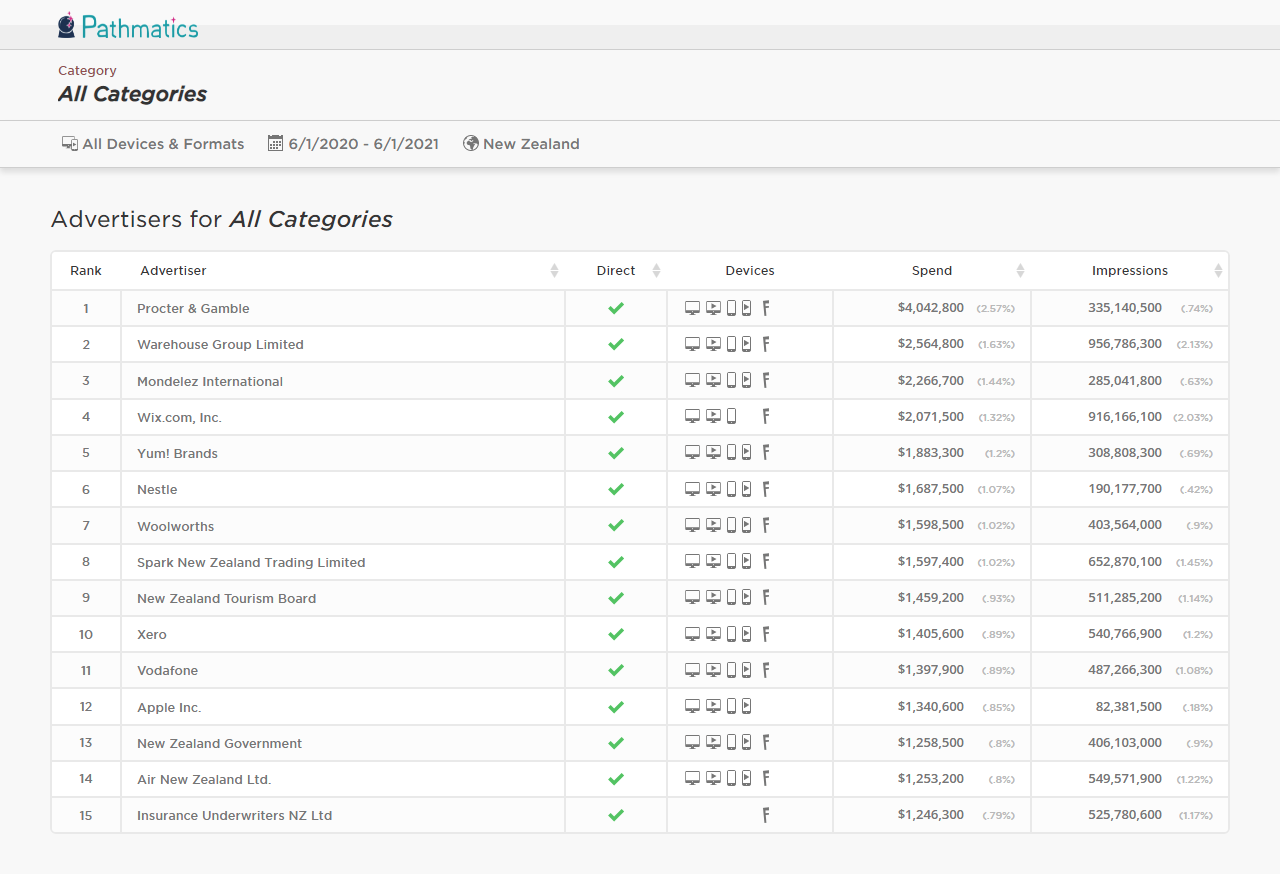 * Procter & Gamble: owner of brands including Pantene, Oral B, Olay, Vicks, and more

Ad spends are estimates across desktop and mobile display and video, and Facebook.

Marking this regional expansion is the launch of Pathmatics’ 2021 Digital Advertising report, which unearths key changes to Facebook advertising between 2020 and 2021, including a look at the Covid-19 impacts to the travel and auto industries, and key shifts from CPG, retail and technology players.

A self-proclaimed "data hound," Gabe Gottlieb earned his stripes leading software teams at Microsoft. Gabe saw a pervasive problem with the lack of openness in the digital advertising world and decided to join forces with Tom Lorimor to level the playing field. Now, five patents later, the Co-Founder and CEO of Pathmatics is leading the movement for transparency in advertising. Gabe holds dual degrees, in Engineering and Finance, from the University of Pennsylvania and the Wharton School of Business.