Throughout the pandemic, Facebook posts have been a superspreader of medical misinformation. Everything from false claims that COVID-19 vaccines contained microchips to dangerous “remedies” involving bleach and horse dewormer have gone viral on the platform. 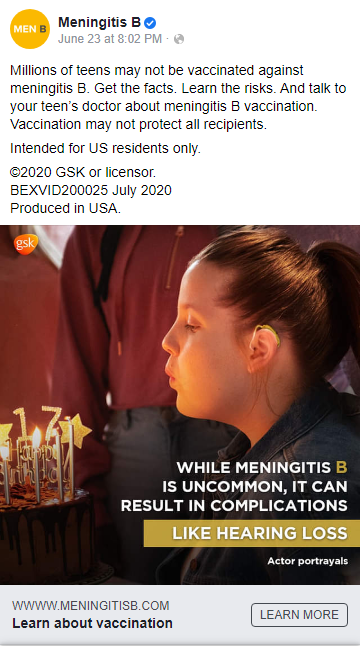 In spite of this, Facebook remains a top advertising channel for legitimate medical treatments. Data from our ad intelligence tool, Pathmatics Explorer, shows that the top pharmaceutical and healthcare advertisers are ramping up their investments in Facebook ads heading into the fourth quarter.

We looked at the top four advertisers in this category — GlaxoSmithKline, Pfizer, AbbVie, and the Sanofi Group — to see their top creatives throughout the year and how their content and investments have changed since the beginning of summer.

GlaxoSmithKline’s COVID-19 vaccine, which is being developed with Sanofi, is still in Phase 3 trials — but that didn’t stop the British pharmaceutical company from advertising its other vaccines.

GSK’s top Facebook ads encouraged parents to get their teens vaccinated against meningitis B, and to get themselves vaccinated against whooping cough. Other creatives urged consumers to be proactive about their health by protecting their teeth with Pronamel and Sensodyne and nourishing beneficial gut bacteria with Benefiber.

So far in 2021, GlaxoSmithKline has invested $123.9M million in digital ads — and 42% of this has gone to Facebook. In fact, the brand has more than tripled its Facebook digital ad investments since January 2021.

After remaining relatively steady throughout the first half of the year, GSK’s Facebook ad spend shot up by more than $7M from July to September. Whereas the other three brands we looked at primarily ran video ads, GSK leaned heavily into link post ads with 58% of its spend devoted to this ad type. 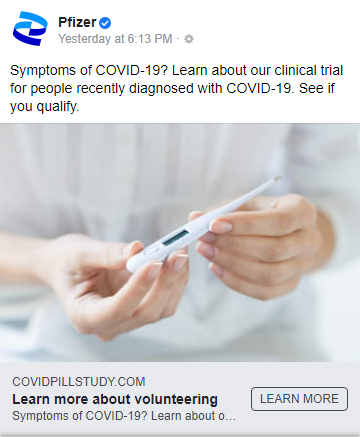 It might come as a surprise that Pfizer’s top ad in 2021 isn’t for its COVID-19 vaccine. In fact, only three of its top ten Facebook ads even mention the COVID jab. This probably has a lot to do with the fact that it wasn’t fully approved by the FDA until late August.

Instead, the pharma company’s top Facebook ads highlighted other vaccines for childhood diseases, pneumonia, and meningitis. At the end of September, we also started seeing an ad recruiting research study participants, which links to covidpillstudy.com.

Facebook is by far Pfizer’s top channel to advertise on, with about 75% of its total spend going toward Facebook ads. Ad spending on the platform has increased slowly but steadily throughout the year — with the exception of a brief dip in June — averaging around $4M per month in January and $6.7M per month in September. Pfizer primarily targeted female audiences (77%) with video post ads (69%). 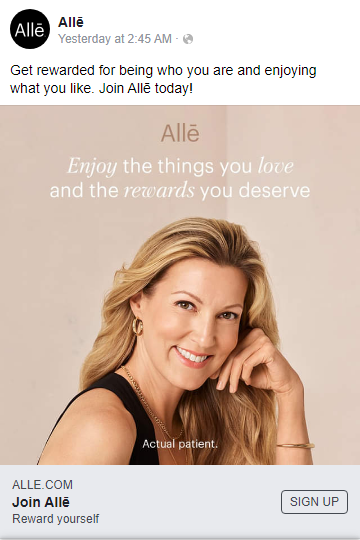 Unlike GSK and Pfizer, AbbVie steered clear of vaccine-related ads altogether. Instead, the pharmaceutical company opted for ads featuring its Allē aesthetics loyalty program, which gives patients rewards points for products and treatments like Botox and Juvederm. Other top Facebook ads promoted specific drugs in AbbVie’s portofolio, such as LO LOESTRIN and UBRELVY.

Facebook ad spend for AbbVie peaked in March, slowed throughout the summer, and then ramped up again heading into fall. AbbVie primarily targeted female audiences (73%) on Facebook, which is not surprising given that it mainly advertised cosmetic treatments, birth control, and a migraine drug. 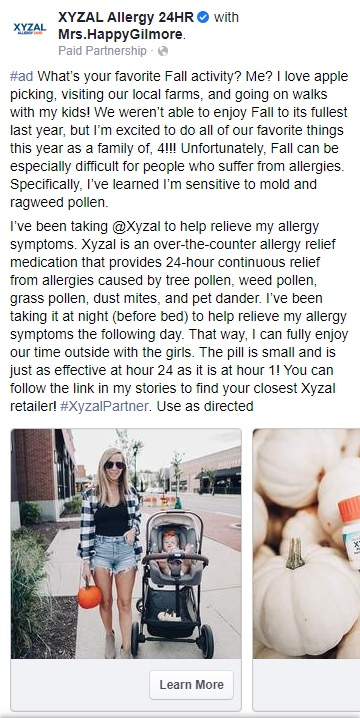 If Sanofi’s ads are any indication, Americans are suffering a lot of sleepless nights since the pandemic. Heading into Q4, five of Sanofi’s top ten Facebook ads featured its Unisom sleep aid. Sanofi also heavily advertised XYZAL and Nasacort, which makes sense for fall allergy season.

Interestingly, Sanofi was the only advertiser we saw who made an attempt at influencer advertising with a XYZAL ad featuring mom blogger Mrs. Happy Gilmore. We also spotted several Icy Hot ads throughout the year starring Shaq.

Like the other three advertisers we looked at, Facebook was Sanofi’s top channel to advertise on. Facebook ads made up 46% of Sanofi’s $58.8M spend. Sanofi followed a similar spending pattern to AbbVie, with Facebook spend spiking in February, slowing from March through July, hitting an all-time high in August, and remaining high throughout the fall.

While Facebook hasn’t always been a reliable source of medical information during the pandemic, it’s clear that these four pharmaceutical and healthcare advertisers still see it as an important platform to reach patients. We’ll watch this space to see how their advertising strategies evolve heading into 2022.

Want to see how your favorite brands or competitors are advertising? Get a custom insights session.