Shop 'Til You Drop: How Retailers Are Utilizing Digital Marketing to Recover From the Pandemic

As vaccination numbers rise, no one is more excited to welcome back consumers than department stores.

Brick-and-mortar retailers were already struggling before the pandemic as malls fell out of fashion and Amazon expanded its online shopping empire. And as you would expect, a deadly virus didn’t make things any easier.

Sales plummeted when COVID-19 closed stores for weeks on end. Barney’s, JCPenney, Neiman Marcus, and Lord & Taylor were among dozens of iconic retailers that filed for bankruptcy during the pandemic.

While news reports and polls triggered fears of a permanent shift to online shopping, that doesn’t seem to have happened. Foot traffic to stores is up 86% from last year, suggesting that consumers are starting to return to their pre-pandemic shopping habits just in time for summer “End of Season” sales.

Pathmatics data shows that Nordstrom, Macy’s, and Bloomingdales are amping up their digital advertising to get consumers in and clear the racks. Let’s take a closer look at the digital ad strategies these retailers are using to get shoppers off the computer and back IRL.

Nordstrom’s Anniversary Sale is its biggest and most anticipated annual shopping event. But this year more than ever, the brand is pinning its hopes on the event to lure buyers back to stores.

In spite of a surge in digital sales in 2020, Nordstrom’s profits tumbled during the pandemic. The company’s sales in the most recent quarter soared above figures from a year earlier, but have still not returned to pre-pandemic levels.

Nordstrom president Jamie Nordstrom told The Associated Press he predicts that shoppers will use the sale as an opportunity to refresh their wardrobes and “reinvent how they want to look” as they emerge from lockdowns.

Taking a look at Nordstrom’s top creatives, we noticed ads for two items we haven’t needed much during the pandemic: shoes and handbags. Workwear was also a prominent theme, but featuring a casual twist (think sneakers with suits) as remote workers prepare for the return to the office. 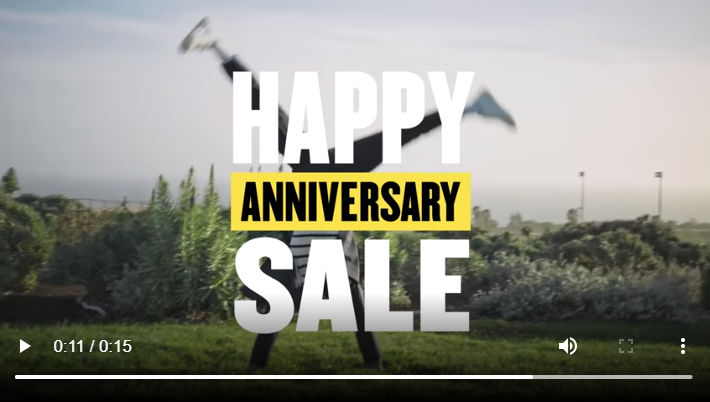 Ads for the Anniversary Sale, which opened on July 28, started appearing at the beginning of the month. Nordstrom cardholders can start shopping deals as early as July 12. Last year, cardholders accounted for around 80% of purchases during the annual sales event. Knowing this, it makes sense that the brand is advertising sooner and giving people more time to shop early access this year.

Nordstrom has spent $16.8M on digital advertising since the start of 2021. More than half its spend has been funneled into Instagram (51%), followed by Facebook (40%) and desktop display ads (7%). Spending has been relatively flat between January and June, with overall spend not exceeding $2.5M in any month. Even with the brand’s high hopes for the Anniversary Sale, its spending this July ($3.3M) isn’t anywhere near what it was in pre-pandemic times. 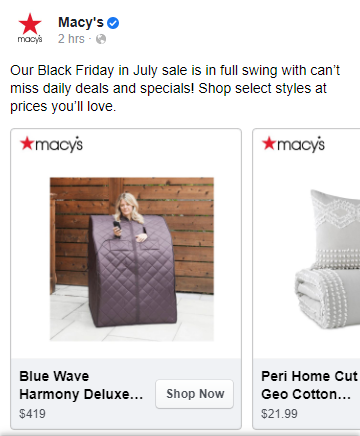 Before the pandemic forced stores to close temporarily, Macy’s had already announced a plan to permanently shutter 125 stores — nearly a fifth of its physical locations — as it focused digital and omnichannel sales.

This plan gave Macy’s a well-heeled leg up when COVID-19 hit. Even so, the company’s 2020 financial report shows that sales plummeted 29% last year. However, the brand boosted its outlook for 2021 as vaccinated shoppers started returning to stores and spending their stimulus checks.

Like Nordstrom, Macy’s is dangling the summer discounts. Six of its top ten creatives in the last month promoted its July 4 and Black Friday in July sales. The remaining ads pushed in-store pickup, curbside, and same-day delivery options. This makes sense given that 25% of Macy’s digital sales in Q4 were fulfilled from stores, and physical stores will continue to power the omnichannel experience even after the pandemic is over.

So far in 2021, ad spending for the department store chain has outpaced both 2019 and 2020 levels, which could point to a recovery for the retail industry as pandemic-related restrictions ease. In May alone, Macy’s spent $6.5M on digital ads — more than any other month since 2019 with the exception of October 2020. Compared to Nordstrom, Macy’s spending strategy was much more balanced, with 30% of its budget going to Instagram, 25% to Facebook, 25% to YouTube, and 12% to desktop display.

Like its sister brand, Macy’s, Bloomingdale’s is betting on the return of brick-and-mortar. The upscale chain is preparing to launch “Bloomie’s”, a smaller version of its department stores that will combine in-person shopping with the convenience of the online experience, including a return dropbox, in-store or curbside pickup, and access to tech-enabled stylists.

However, its top creatives didn’t allude to the concept store opening. Instead, the retailer tried to entice shoppers to "buy more, save more" with irresistible deals on designer clothing, shoes, handbags, and fine jewelry.

Other top creatives pushed Bloomingdales’ wedding registry. We’re thinking the department store is eager to capitalize on the summer rush as couples that put off their weddings during the pandemic finally tie the knot.

Bloomingdale’s has invested $1.4M in digital advertising in 2021. Most of this went toward desktop display ads (45%), with smaller portions devoted to Instagram (32%), Facebook (12%), and mobile display (11%). Unlike Nordstrom and Macy’s, only 58% of the brand’s spend share was allocated to direct sources, while the remaining 42% was spent on indirect sources. 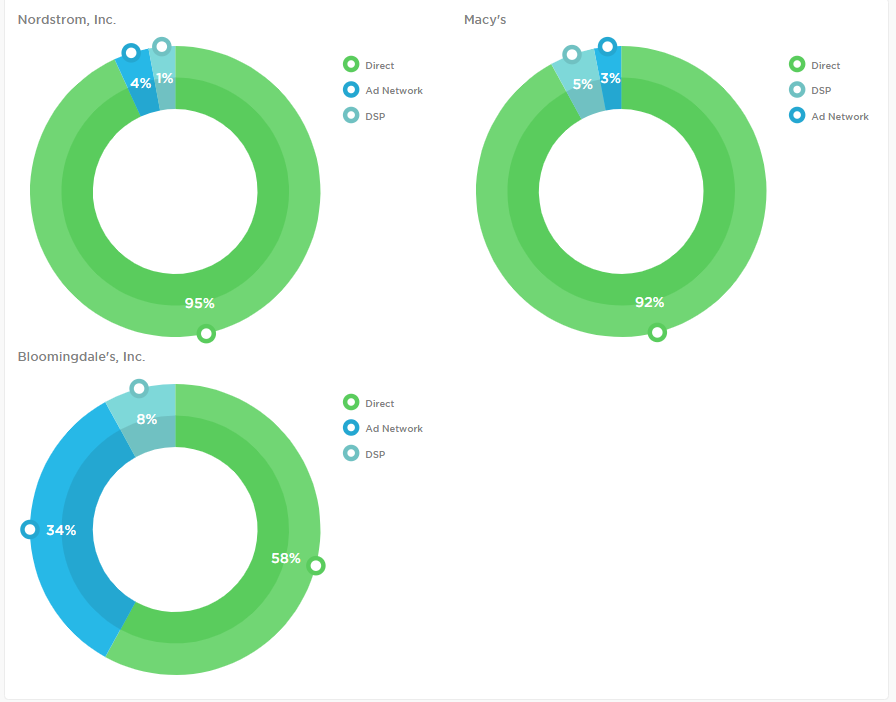 While retail sales have shown signs of a recovery, it’s going to take more than a few well-timed sales to bring them back. Department stores will need to continue investing in digital ad campaigns and improved in-person shopping experiences if they’re going to convince consumers to give up the comfort of their couch and come back to stores.