Back in 2019, the launch of Disney+ caused quite a stir. The new service kicked off the streaming wars with Netflix and other established services.

Fast forward to today, and the streaming wars are still going strong. Top streaming services are trying to stand out from their competition by offering exclusive deals or movies (or both!).

Let's take a closer look at four of the leaders — Hulu, HBO Max, Disney+, and Netflix — to compare their ad strategies as they prepare for the holiday season.

HBO Max has spent a whopping $112.4M on digital ads since the beginning of October — more than Hulu and Netflix combined. The biggest spending push came in the last week of October, coinciding with the release of Dune in theaters and on HBO Max on 10/22.

Nine of its top ten creatives featured the epic sci-fi adaptation, which is only available with HBO Max’s $14.99/month ad-free plan. Clearly, HBO Max is hoping to capitalize on this exclusive content and entice faithful Timothée Chalamet fans to upgrade their subscriptions.

Nearly 70% of HBO Max’s ad budget was dedicated to Facebook, amassing 7.6 million impressions. Most of its remaining budget went toward Instagram (23%), with less than 10% devoted to other ad formats.

In the weeks leading up to Thanksgiving and Christmas, Disney+’s top creatives include ads for exclusive movies and series like Cruella, Loki, and The Falcon and the Winter Soldier. Other creatives encouraged cable-cutters to bundle their service and get Disney+, Hulu, and ESPN+ for $13.99/month.

But its biggest advertising push by far was Disney+ Day on November 12, a celebration of the streaming service’s two-year anniversary, which featured a deal where new subscribers could get their first month of Disney+ for just $1.99.

Disney also released a huge batch of new content on Disney+ Day, including Shang-Chi and the Legend of the Ten Rings, Jungle Cruise, and Star Wars Under the Helmet: The Legend of Boba Fett.

The streaming service, which has spent $72.3M on digital ads since October, ramped up its ad spend by nearly 500% to promote Disney+ Day. Like its rival HBO Max, Disney spent the largest share of its budget on Facebook (37%), followed by desktop video (29%), Instagram (23%), and Twitter (7%).

Throughout October and November, Hulu — which is owned by Disney — has been running ads for a free 30-day trial that gives viewers access to original content like The D’Amelio Show, Only Murders in the Building, Reservation Dogs, and The Great.

Hulu's spending stayed fairly steady in the weeks leading up to Thanksgiving. Then, for Black Friday weekend, the streaming service nearly quadrupled its spending to promote a special deal where subscribers could get Hulu for $0.99/month for a full year. 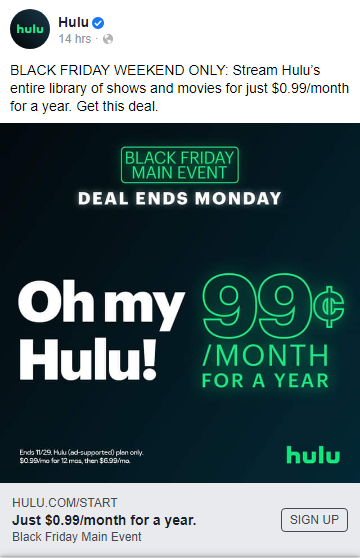 At $6.99/month, Hulu is already less expensive than its competitors. And while Hulu’s original content is nothing to scoff at, a recent article in Variety notes that parent company Disney is “spending dramatically less than Netflix, Disney Plus and Amazon on Hulu-only original programming”. Knowing this, it makes sense that Hulu decided to devote most of its advertising dollars to promoting its Black Friday deal.

Hulu also took a different approach to spending from its baby brother Disney+, focusing on desktop video (41%) over Instagram (32%) and Facebook (16%).

With plans ranging from $9-18/month, Netflix is one of the pricier streaming services we looked at. Yet the streaming giant has only spent $14M on advertising since October — a fraction of what its competitors are spending.

In spite of its (relatively) modest advertising budget, Netflix continues to set the standard for streaming services with industry-leading 4K video quality, exclusive movies, and original series like Squid Games and Tiger King.

Its ads are reflective of this, with five of its top ten creatives since October promoting Arcane, a Netflix exclusive and the first animated series based on Riot Games’ League of Legends video game. Given the popularity of the Marvel cinematic universe, which is owned by Disney, it’s no surprise that Netflix is pushing rival League of Legends universe. Other creatives touted highly anticipated new releases that viewers can’t watch anywhere else, like The Harder They Fall and Red Notice.

Unlike HBO Max and Disney+, which invested heavily in Facebook ads, Netflix went the opposite direction and pulled nearly all of its Facebook ads at the end of the year. Instead, the streaming service chose to funnel a majority (38%) of its budget into Instagram ads, as well as followed desktop display (15%) and desktop video (14%). And, with new tracking for OTT in October, a big spike in the channel offers what we'll see in the future.

While HBO Max and Netflix are leaning on exclusive content to attract new subscribers, Disney+ and Hulu seem more concerned with promoting exclusive deals than pushing a particular show or movie — although both are advertising a variety of original content to sweeten the deal.

It's hard to say which strategy will come out on top, but given that the average American subscribes to 3.4 streaming services, there are plenty of opportunities to woo new customers this holiday season.