It’s an age-old question: which came first, the chicken or the egg?

In this case, we can definitively say it’s the chicken — specifically, Popeyes' insanely popular chicken sandwich. Since the spicy sandwich made waves on social media in 2019, many other fast food chains have hatched their own plans for chicken sandwiches.

As the chicken sandwich wars heat up, we dug into Pathmatics Explorer to see how McDonald’s, Burger King, Taco Bell have used digital advertising to launch their new offerings. 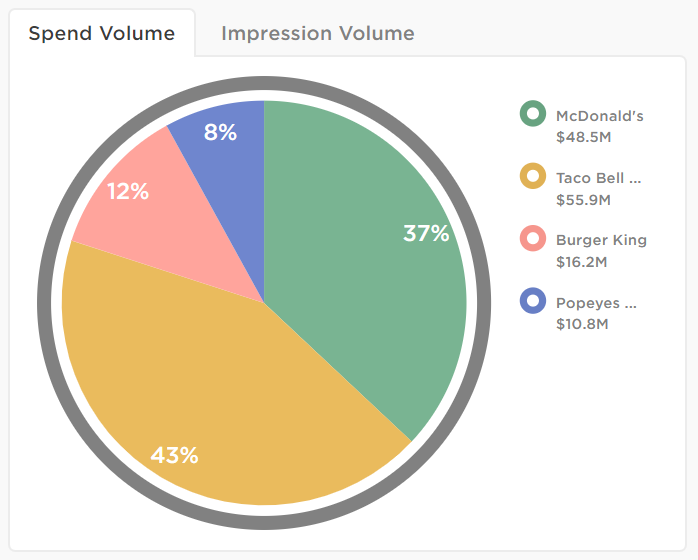 The battle for the bun shouldn’t come as a surprise, given that chicken represents a more than $30 billion segment globally — almost twice the size of beef and growing at a faster rate.

At first glance, we can’t help but notice how much Taco Bell is outspending the competition. Over the last six months, Taco Bell has invested $55.9 million in digital advertising, while McDonald’s has spent $48.5 million. That’s particularly impressive when you consider that Taco Bell is much smaller than McDonald’s in terms of sales.

Burger King, by contrast, has only spent $16.2 million on digital ads — although its spending has been steadily increasing since October.

And perhaps all the news about the chicken sandwich competition has been making Popeyes nervous, since we saw a $2.5 million spending push from the brand in February.

In terms of ad formats, McDonald’s and Taco Bell have relied heavily on desktop video to promote their menu items (70% and 51% of their budgets, respectively).

Burger King took a totally different approach — one that much more closely resembles Popeyes’ ad mix. The chain was careful not to put all its eggs in one basket, distributing its budget across Instagram (41%), desktop video (33%), and Facebook (22%).

When we wrote about Popeyes' digital advertising strategy for its chicken sandwich back in 2019, we noted that the fast food chain ran a hyper-targeted ad campaign promoting its test item. So naturally, when we sat down to write this article, we wondered whether other fast food chains would take a similar approach.

McDonald’s reportedly started testing its Crispy Chicken Sandwiches in Houston and Knoxville in December 2019, shortly after Popeyes’ rise to fame.  And while we did see about 3% of McDonald’s budget going toward Houston around that time, many of its creatives were still promoting its original McChicken sandwich:

Meanwhile, Burger King has been testing out its new Hand-Breaded Crispy Chicken Sandwich in select markets. 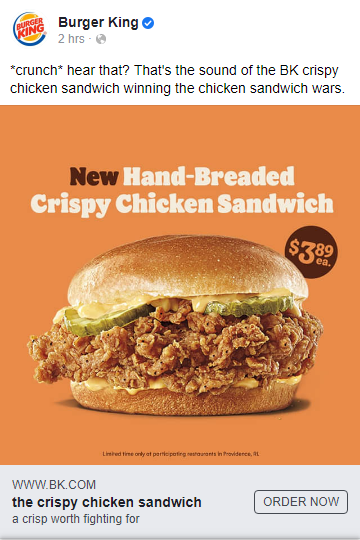 Pathmatics Explorer first picked up ads for the sandwich in October 2020. One of the earliest ads was this one, which ran from 10/9/20 to 11/3/20 and specifically called out the chicken sandwich wars:

And while Burger King hasn’t revealed exactly where the sandwich is for sale, we have it on good authority that it was available in the company’s hometown of Miami in October.

During that time, geo-targeting data shows that around 1% of Burger King’s spend share went toward Miami. In addition to Florida, Burger King targeted spending in California and Texas, which is typical for Burger King.

However, that trend shifted in November, with unusually high spending in Ohio and Oklahoma. That piqued our curiosity, so we dug a bit deeper and discovered that fast food chains often test new items in Ohio. Could this be a clue?? 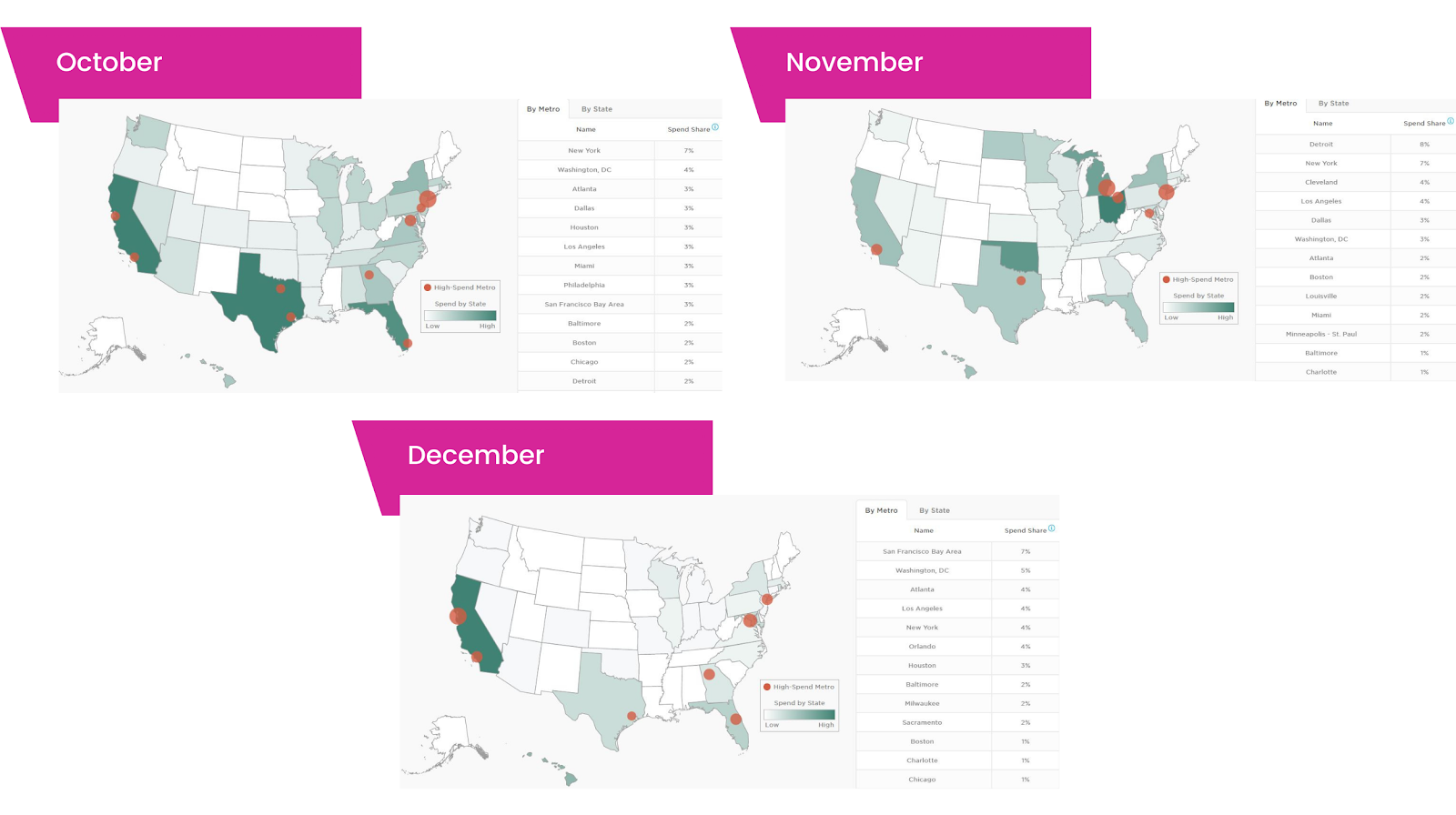 By December, we’re seeing a lot more ads for the new Hand-Breaded Crispy Chicken Sandwich, and Burger King is back to targeting California, Texas, and Florida, with higher-than-normal spend share in Miami (where the sandwich was apparently available).

First off, what exactly is a Crispy Chicken Sandwich Taco? It's a piece of crispy tortilla-coated chicken and chipotle sauce served in a folded flatbread, like so:

Eater reported in February that Taco Bell’s Crispy Chicken Sandwich Taco would be tested at select locations in Nashville and Charlotte starting March 11. 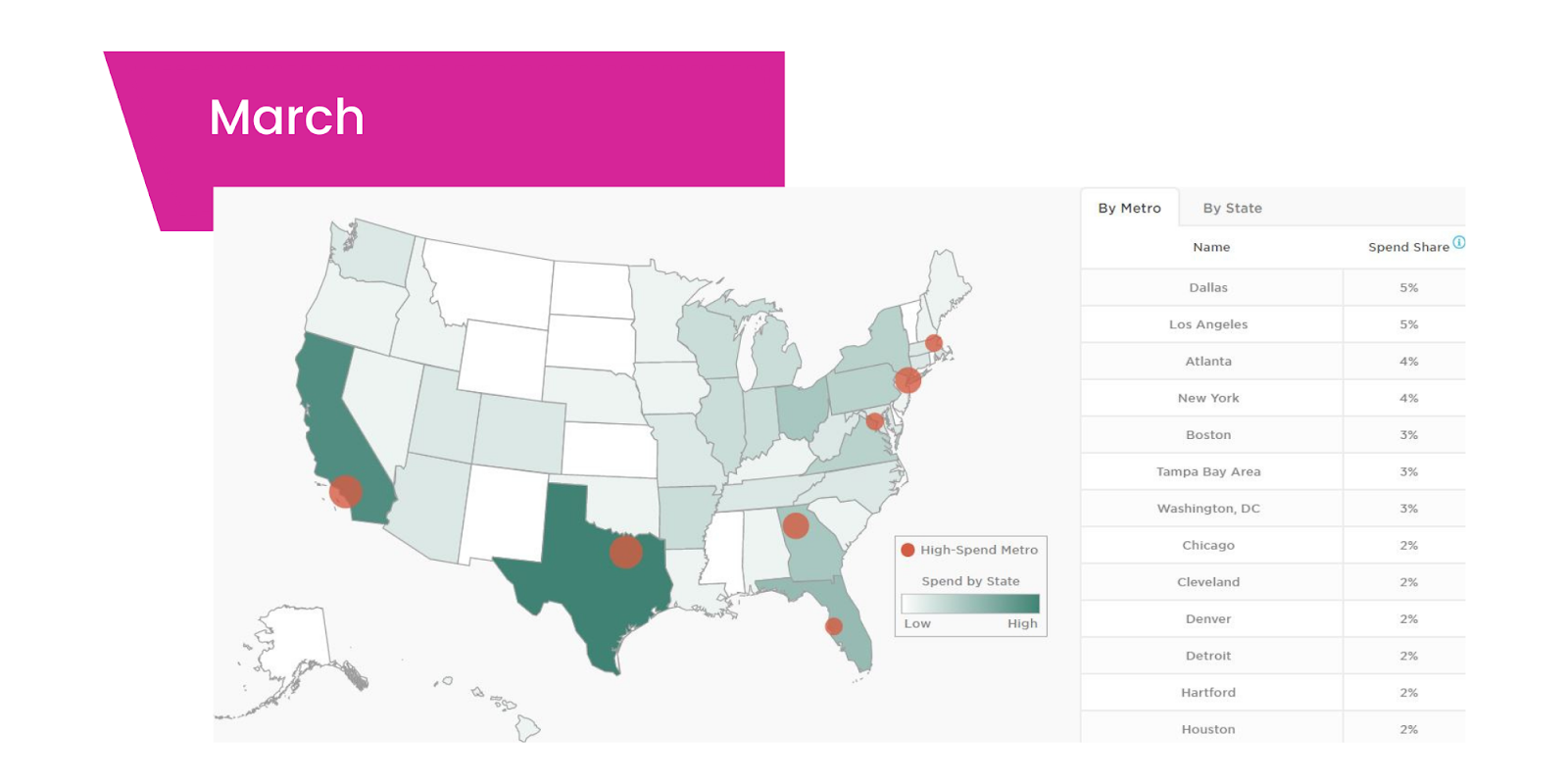 Facebook and Instagram geo-targeting data confirms that Taco Bell is devoting around 1% of its budget to each of these cities, with high spend share in Dallas, Los Angeles, Atlanta, and New York. But so far, we haven’t seen any ads specifically mentioning the Crispy Chicken Sandwich Taco. 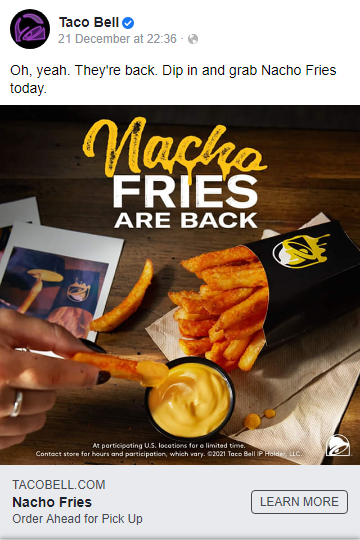 Instead, the chain devoted considerable real estate to promoting its Nacho Fries.

In spite of not running any paid campaigns advertising the Chicken Sandwich Taco, the announcement still ruffled some feathers. Popeyes, upon hearing the news, trolled Taco Bell with a chicken taco hack on TikTok that involved folding its famous sandwich in half. If you recall, Popeyes did the same with Chick-fil-A, which leaves us to wonder: Does Popeye’s see the chicken sandwich taco as a threat? And, is Taco Bell counting on Popeye’s pecking to generate buzz for its new offering?? Only time will tell.

And the winner is...

Since only one of these three restaurants has officially rolled out its new chicken sandwich, it’s too early to declare a winner in the chicken sandwich wars. In the meantime, all of these ads have us craving a chicken sandwich. Perhaps we'll continue our research at the drive-through...