2020 has come and gone in a flash. It feels like yesterday we were introducing this year’s Super Bowl ads and obsessing over March Madness. Now, we’re talking about the biggest Cyber Week on record and the art of copywriting during the pandemic.

The year was filled with highs and lows, advertising campaigns never to be forgotten, and ones you wish you could (looking at you, moldy Whopper). Without further ado, check out a few of advertising’s winners and losers of 2020.

In 2019, Peloton released its “Peloton Wife” ad, which was widely meme’d and criticized across the internet. The cycling giant seems to have learned from its mistakes in 2020, as its top digital ads from the year feature much more realistic scenarios (and less acting) than the previous years’ Christmas ad disaster.

Though Peloton didn’t have high ad spend this year — only $18M across all digital ad channels we track versus $45M in 2019 — it learned from its mistake and created ad campaigns that spoke to how riders really use their bikes. Peloton offered competitive pricing, classes any time of day, and a far more realistic approach to consumers. 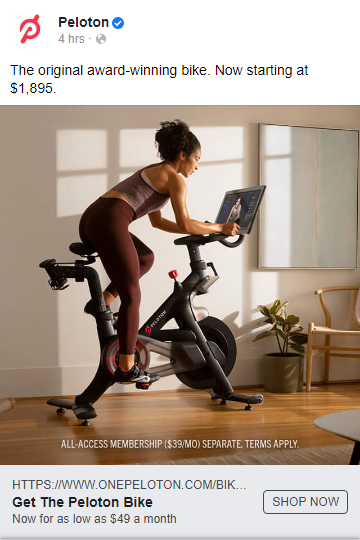 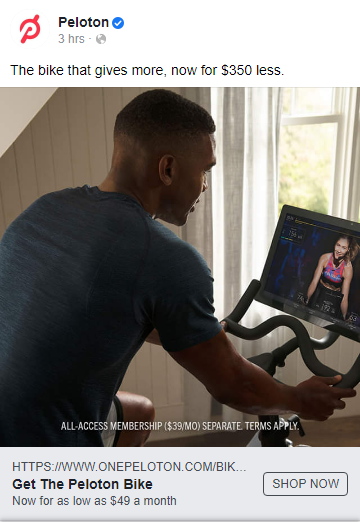 It’s no secret that Apple and Facebook have had a terrible slash nonexistent professional relationship. Facebook’s even taken newspaper ads out against the tech giant, which partially explains why Apple hasn’t spent a dime on Facebook and Instagram advertising this year (and years prior).

If you take a look at its spend through December 2020, you’ll see a dramatic increase in desktop ad spend with peaks in June, September, and around the holidays. Apple’s always had an incredibly strong marketing strategy, even sans Facebook and IG ads, giving it winner-level status.

During the pandemic, they churned out new lines of iPhones, iPads, Apple Watches and promoted new Apple+ content, and published ads to sites like YouTube ($238M), IMDb.com ($9M), and Twitter ($7M), for a diverse strategy. 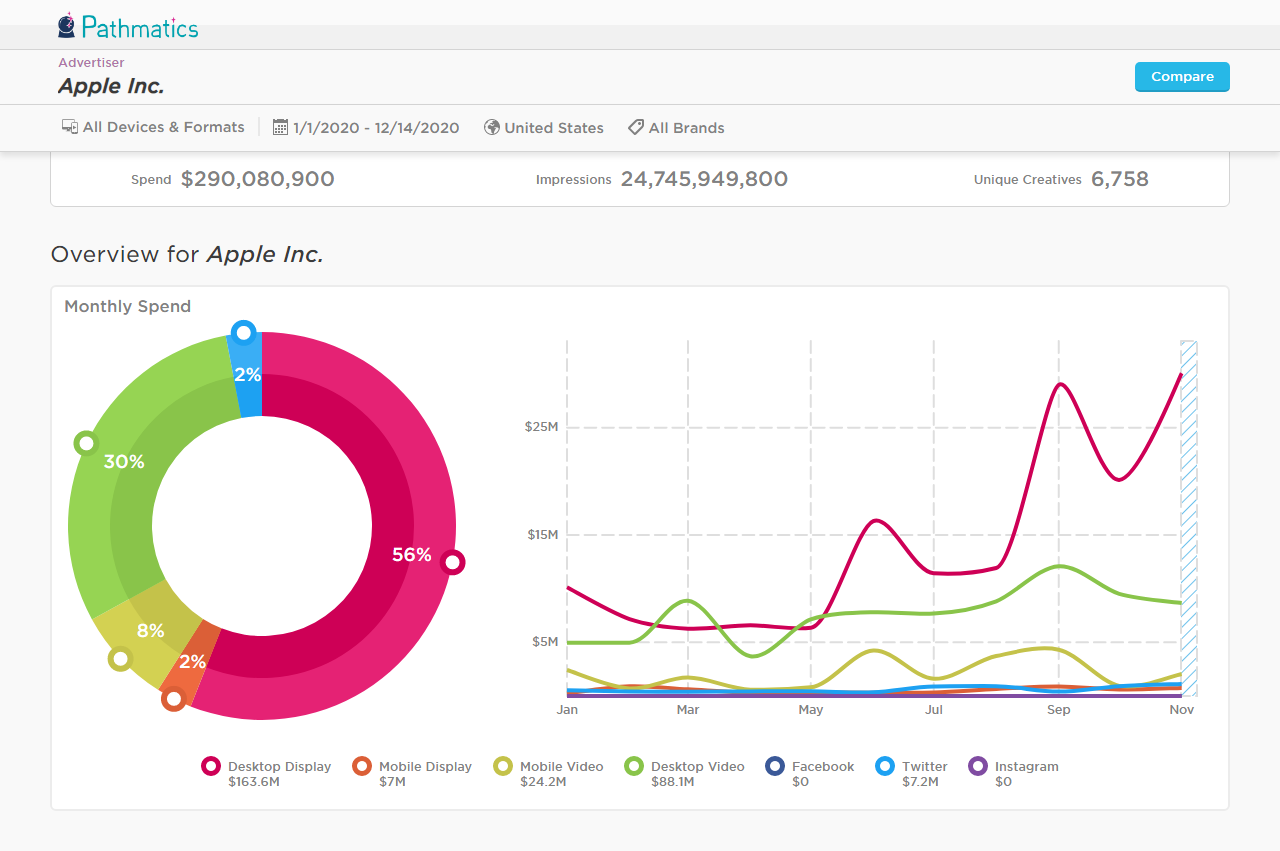 What do Hulu, DoorDash, and Noom have in common? They’re D2C advertisers that won big time in 2020. D2C companies cashed in on Americans quarantined at home for three-fourths of the year, appealing to those who would rather shop from the comfort of their computer versus enter a brick-and-mortar.

Hulu and Netflix may have spent more on digital ads than any other D2C advertiser in 2020, with whopping $198M and $87M investments, respectively. Noom, the healthy habits app, also peaked into the list of top D2C spenders, at $54M. All in all, D2C advertisers took an opportunity to gain new customers from a captive audience.

Though Facebook is one of the most popular sites for social advertising, the platform has come up against a myriad of issues in the last few years, from disinformation to enabling hate speech and not acting swiftly enough to remove negative content from its platform.

These issues finally came to a head in July with an industry-wide boycott that saw the likes of major advertisers such as Unilever, Disney, and Microsoft drop spend from millions of dollars to ~$0 practically overnight. Per CNN calculations with Pathmatics data, the highest-spending 100 brands accounted for $4.2 billion in Facebook advertising in 2019, or about 6% of the platform's ad revenue.

That’s why, despite Facebook still retaining major revenue from its advertising arm, it’s a 2020 advertising loser.

That’s a mighty drop for a company that has a focus in consumer electronics —  one of the most booming ecommerce categories during the pandemic.

This year, Best Buy dropped its mobile video ad spend to $0 and significantly dropped Facebook and desktop video ad spend. They can’t compete with big electronics retailers such as Walmart or Amazon with that kind of strategy.

Political advertisers came up against a lot of restrictions on Facebook and Twitter this year. Facebook banned any new political ads leading up to the election, and in the weeks after, it banned any claims of premature victory.

Unlike other advertiser categories, political advertisers are widely restricted to exactly what they are able to post, and where. As a result, we’re labeling the entire category a loser of 2020.

Some advertisers made it big and others fell short this year. Peloton recovered from their fall in 2019 (goodbye #PelotonWife), Apple successfully released a few new products (sans Facebook ads), and D2C brands took advantage of Americans staying home.

Meanwhile, Facebook experienced mass boycotts, Best Buy was bumped out of the Top 10 advertisers of the year, and political advertisers dealt with ad limitations on Facebook and Twitter.

Do you disagree with our advertising winners and losers of 2020? Who would you add to the list? Let me know on Twitter @WilliamMerchan.

U.S. Advertisers Spend $1B Per Month on OTT—Plus More In Our New Report

Top 3 Digital Advertisers in the First Half of 2021