Traditionally, companies in the retail and CPG industries spend more on digital ads than any other group. Take a look at Pathmatics’ top advertisers list at any given time and you’ll likely find big-name brands including Amazon, P&G, and Walmart.

Once in a while, though, an advertiser has an unexpected surge in spend as a result of a recently launched campaign, a new service, or another big announcement. This year, that advertiser was Michael Bloomberg’s 2020 political campaign.

Bloomberg entered the US Presidential race in late November 2019, months later than his opponents had begun campaigning. To catch up, he invested $7.1M in digital ads through the end of December 2019, and another $36.7M in 2020 across Facebook, video, and static ads.

While his candidacy is now over, the ad world is still discussing his far-reaching digital footprint.

Bloomberg’s campaign spent 70% of its total budget on Facebook and $14.8M since January 1. The focus on Facebook is likely a result of the platform’s targeting tools and the fact that candidates including Elizabeth Warren and Bernie Sanders also spent heavily on Facebook ads in the duration of their campaigns. 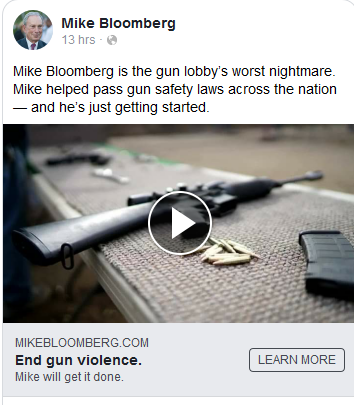 Further, 80% of Bloomberg’s Facebook ads this year include video posts, followed by link posts at 13%. This approach highlights Bloomberg’s need to boost his campaign awareness as soon as possible.

Perhaps the most memorable social tactics the Bloomberg campaign employed is an overnight social media takeover of the most popular online meme accounts, including @MrsDowJones, @grapejuiceboys, and @kalesalad. No other politician has leveraged Instagram and other social sites in this way, and it’s unprecedented given social’s tight political ad restrictions. For example, Twitter no longer allows political ads and Facebook has been battling fake news for years now. The approach caused all platforms involved to rethink its political and influencer policies.

The campaign gets creative

When we see an advertiser that has many creatives (say, 400 in two weeks), we can safely assume the advertiser is trialing different copy, images, messaging, or links on posts to see what’s resonating with their intended audience. With a total of over 8,500 creatives in just under four months, it’s clear the Bloomberg campaign tested a variety of ad combinations for an incredibly holistic approach to its Facebook strategy.

Top creatives for Bloomberg focused on his opposition to the NRA and gun lobbying, his anti-Trump stance, and his thoughts on creating jobs. Unlike other candidates, Bloomberg’s calls-to-action ask users to “learn more” in lieu of donating or contributing, which is true to Bloomberg’s self-funded campaign. 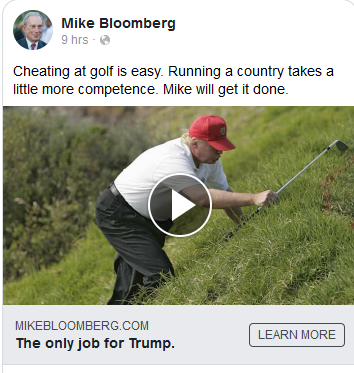 The only politician who has been able to rival Trump’s digital ad spend is Bloomberg.

When Bloomberg entered the race in November, Trump’s reelection campaign had already spent $42.7M on advertising since the start of 2019. By February, Bloomberg was regularly outspending Trump on a week-to-week basis. While Bloomberg spent just over $31M on Facebook ads that month, Trump spent 2.5 times less at $12M. This high spend boosted Bloomberg to number two on Pathmatics’ top advertisers list for February, while Trump floated at number 17. One huge similarity between both ad campaigns is the large investment in Facebook advertising. Trump’s campaign spent 97% of its budget on Facebook from November onward. Since then, Trump’s top creatives have promoted his February State of the Union address, and encouraged his supporters to “sign his petition and stand with him” against the “fake news media.”

While he doesn’t mention Bloomberg specifically in any ads, he does name Bernie Sanders and current Speaker of the House Nancy Pelosi. Given Bernie is the only Democratic candidate labeled as a target in Trump’s ads, one can surmise his team may have previously predicted Bernie would be a frontrunner in the race, and wanted to halt his rise in popularity.

Bloomberg had a poor performance during Super Tuesday and subsequently decided to leave the race to endorse Joe Biden. While his ad data flatlined on March 15, his digital campaigns will live on in political internet infamy.