Over the past few years, Facebook has faced criticism from lawmakers and the public related to data privacy issues. That’s why, in June of last year, the social media giant opted to bring more transparency to its advertising: It now allows anyone to view active ads for a given advertiser, essentially taking the mystery out of so-called “dark posts.”

Dark posts are social media ads that, unlike their organic counterparts, only appear in the feeds of users an advertiser has specifically targeted. During the Cambridge Analytica scandal, 87 million Facebook users whose information had been gathered by the now-defunct U.K. advertising firm were exposed to targeted political ads — many of which were problematic, but went unscrutinized because they weren’t widely available.

Now, anyone can click on the “Info and Ads” button on an advertiser’s Facebook profile to see what creatives it is currently running on the platform. While the tool was rolled out primarily to shine a light on abusive advertising practices, it has also opened up a door for legitimate organizations to research their competition.

Using Facebook’s new ad transparency tool, it’s possible to view your competitors’ paid ads on the platform in one easy-to-understand feed and the landing pages they drive to — but not much more.

For example, let’s look at the “Info and Ads” page for streaming service Hulu. As noted at the top of the feed, it’s only possible to view active ads — not past campaigns. You can click on the call-to-action for the ad to see where it goes; if Hulu were running Facebook ads outside the United States, it would also be possible to filter the ads by country.

What don’t you see? Well, for one, none of the social interactions that occurred on the ad are visible: comments, shares, likes, etc. There’s also no publish date. Overall, there’s not much to go on, unless you’re researching political ads — in that case, you can view ad performance data. Hulu has run political ads, so by clicking on the “Show me” button under the “Ads Related to Politics and Issues” section on the right side of the page, you can access more information about Hulu’s campaigns in Facebook’s Ad Library.

Here, we can take a look at the streaming service’s now-inactive “I Love You, America” campaign, including impressions, money spent, audience breakdown, location, etc. 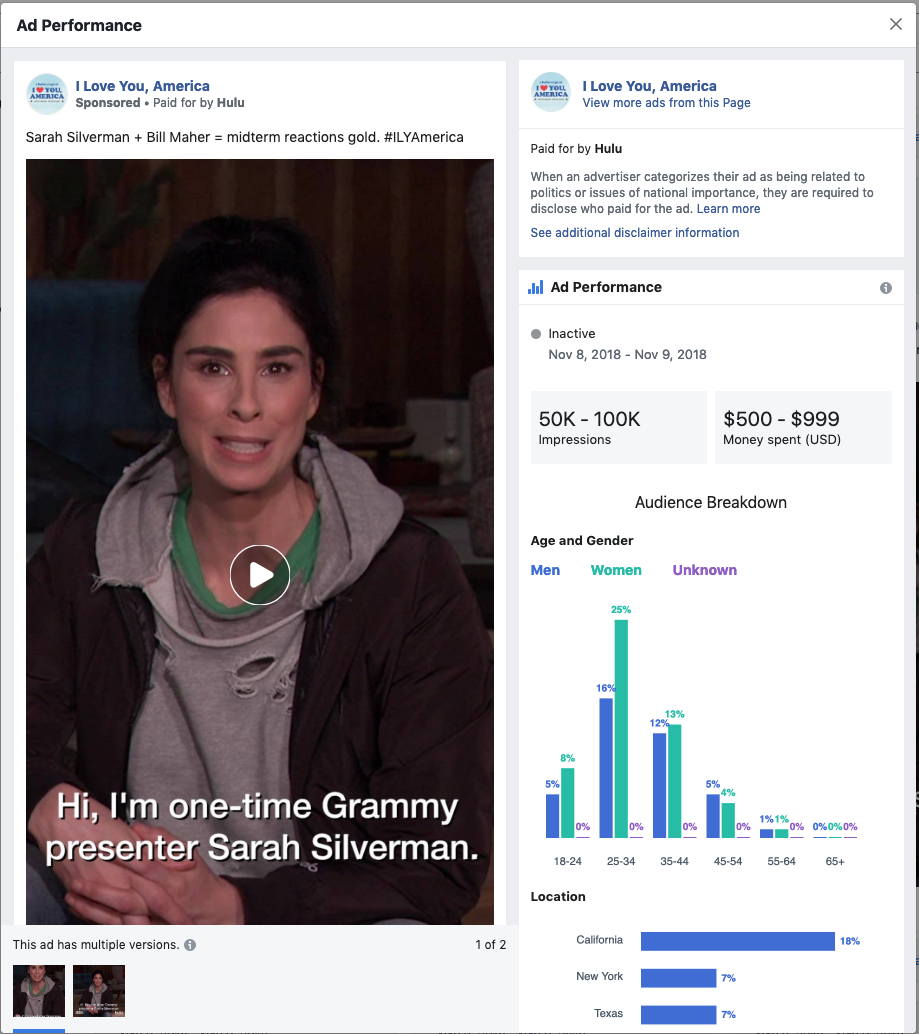 Whether you’re looking at political advertising or just paid social in general, there’s one major downside to using Facebook’s ad transparency tools for competitive research: There’s no easy way to aggregate the information you see. In August 2018, Facebook Director of Product Management Rob Leathern introduced the Ad Archive API to allow researchers and journalists to aggregate and analyze political advertising data, such as performance metrics, start and end date, audience demographics, and more. However, users must request access and provide a reason for doing so (and even if they are granted access, they can still only see data for political ads).

Knowing what your competition is doing on Facebook is important — and it’s more than likely they are doing something, especially when you consider that there are over six million active advertisers on Facebook. But as we’ve seen, the competitive insights you can glean from Facebook’s ad transparency tools are minimal at best.

If we look at Hulu’s recent Facebook ad campaigns on Pathmatics, we can immediately see a much richer dataset: Since the beginning of the year, Hulu has commited millions of dollars to paid social. The majority of those ads were link posts, or ads that include call-to-action buttons. 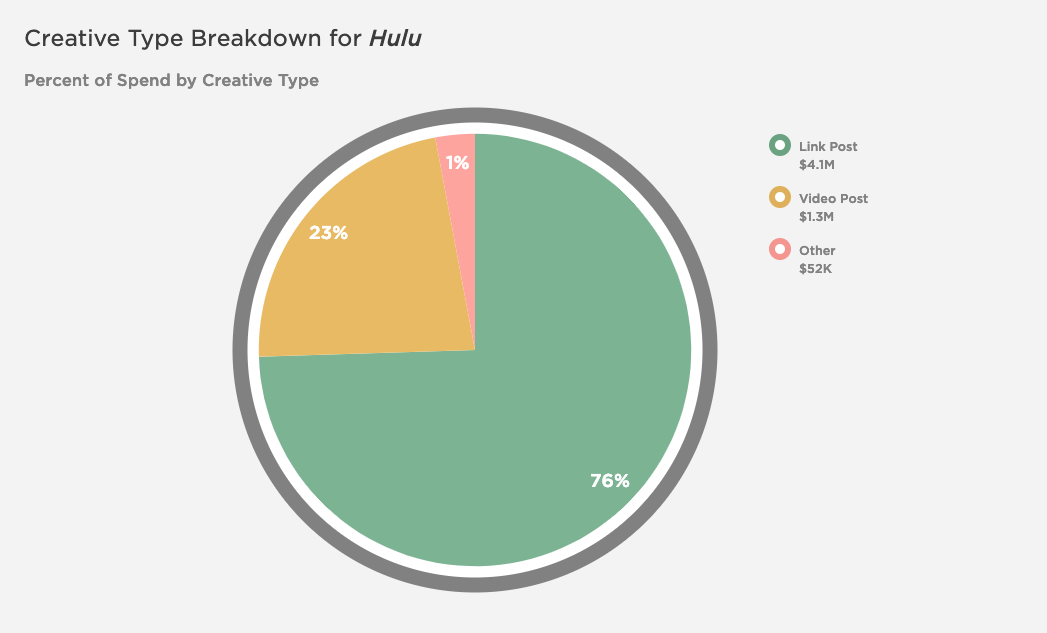 If we look at a specific creative like the one below — one of Hulu’s highest performers so far this year — we can see the ad’s lifecycle and how much it cost. Other data you can see? Spend share by metro or state, percent spend by platform or gender, and more.

Clicking the “See This Ad on Facebook” button will also allow you to view the social interactions that occurred on the ad, information that isn’t visible in Facebook’s ad transparency tool.

While Facebook’s ad transparency tool is a great way to see what your competitors are running right now on a post-by-post basis, it doesn’t help you understand how those ads are performing, who they’re targeting, or how they fit into the advertiser’s larger strategy. Without that information, there’s very little to help inform your own campaigns.

Why does it matter? Well, despite Facebook’s data privacy issues, by 2020, more money will be spent on social media ads than on all television advertising combined. Don’t be left behind.