The pharma and healthcare market is making moves to claim its space in the digital arena. By the end of 2021, industry ad spend is expected to surpass $11 billion, a 32% increase in just two years. Pharma and healthcare's gradual expansion into the digital space is primarily being driven by the COVID-19 pandemic, as consumers spend more time online instead of being exposed to traditional, static advertising.

To continue attracting new customers, pharma and healthcare brands need to step up their marketing efforts and adopt technologies previously neglected by the industry in favor of more conventional advertising channels.

Today, we're doing a pulse check on the top three advertisers in the pharma and healthcare industry in the first half of 2021 and explore how these brands positioned themselves and expanded their digital footprint in a COVID-19 world. 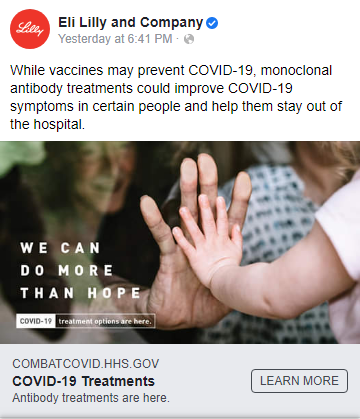 Coming in at the number one spot with over $43.7m invested in H1 2021 digital campaigns is American pharmaceutical brand Eli Lilly and Company. The FDA recently broadened the emergency use authorization for the company's breakthrough COVID-19 antiviral treatment, baricitinib. Under the new authorization, providers can administer baricitinib treatment for adult and pediatric coronavirus patients two years of age or older with COVID-19 who require supplemental oxygen or invasive mechanical ventilation.

The pharma brand raked in 4.9b impressions from its 1,505 creatives promoted primarily across Facebook, Conde Nast digital properties and YouTube.

Top creative during this period include a Facebook link post promoting an awareness campaign of monoclonal antibody treatments directly tied to the company's antiviral drug. Conversely, the company was singing a different tune in the latter half of 2020. No COVID-related antiviral ad campaigns ran during this period. Instead, the brand opted to push their other top-selling pharmaceutical properties, with overall spend peaking in late Summer before sharply declining over every channel by October.

Additionally, most of the brand's ad budget in the latter half of 2020 was allocated to desktop video ads (56%), with 64% of total paid impressions from this period coming from Yahoo. In H1 2021, Eli Lilly funneled 40% of its total ad budget into Facebook, followed by desktop video at 31% spend share, with Yahoo claiming only 9% of total impressions. 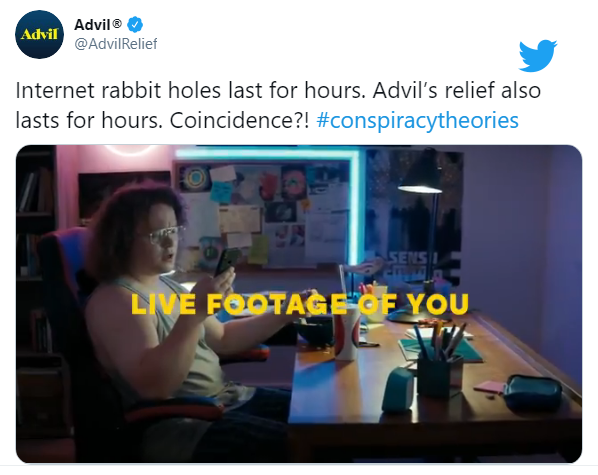 On June 23, 2021, British pharmaceutical GlaxoSmithKline, known for over-the-counter drugs like Advil, Flonase, Centrum, and Nicorette, announced its plans to spin off its Consumer Healthcare unit into a separate company. The company operates in three major business segments, Pharmaceuticals, Vaccines and Consumer Healthcare. The company recently revealed that its second-quarter net profit fell from the previous year, attributing the decrease in YOY profits to lower demand for adult, non-Covid related vaccinations.

Looking at spend share for H1, GlaxoSmithKline funneled a good portion of its budget into Facebook ads (38%), followed by Instagram with 21% spend share, and desktop video at 19% spend share. Interestingly, while Twitter only made up 15% of the brand's total spend for this period, their ads accounted for 26% (1.5b) of total paid impressions.

Strong sales of its COVID-19 vaccine and other top medicines helped Pfizer nearly double its second-quarter revenue. Coming as a shock to no one, Pfizer's trademark COVID-19 vaccine quickly became its top seller, accounting for almost half of the company's revenue — $7.84 billion from direct sales and revenue split with its partner, Germany's BioNTech. Pfizer now anticipates revenue from the two-dose vaccine this year to reach $33.5 billion. Pfizer manufactures more than 350 pharmaceuticals but is most well known for household over-the-counter drugs, including Robitussin, Emergen-C, Viagra, Xanax, Lyrica, EpiPen, Xeljanz, and Neosporin.

The company threw $39.1m into its digital ad campaigns, raking in over 4.7b impressions by the end of June 2021.

While you would think the brand most known for its COVID vaccine would be spearheading awareness and consideration campaigns around its top-selling product, that couldn't be further from the truth. Instead, Pfizer's top creative from this period was a video spot promoting Xeljanz, a medicine known for treating rheumatoid arthritis (RA) and plaque psoriasis, which is usually touted as a key growth driver for Pfizer.

However, during the second quarter, sales of Xeljanz dropped by 8%. Back in January, Pfizer reported results from a post-marketing study for Xeljanz. They pitted the RA medicine against TNF-inhibitors, a class of drugs that treat autoimmune disorders. The study found that patients on Xeljanz had higher rates of cardiovascular events and higher incidences of cancer. The FDA took note and the data has since hurt the number of new patients taking the drug, leading to lower revenue for the company's top-seller. Pfizer presumably took this dip in sales as a cue to ramp up their ad efforts, bolstering product awareness and reinforcing preference.

In the latter half of 2020, Pfizer pushed their over-the-counter eczema cream, Eucrisa, during the early Fall months. The timing of this campaign is strategic as allergy-inducing pollens and molds release airborne spores in autumn, which can trigger eczema symptoms and flareups.

Traditional marketing strategies in the pharma and healthcare industry have typically revolved around a one-size-fits-all approach targeted at the physician. Historically, anticipating the needs and expectations of patients and providers hasn't been a priority, but that's starting to change, and we're excited to see what this industry will do with its newly realized power.