Why Budweiser, Kia, and Planters are bowing out of Super Bowl 2021

Super Bowl Sunday is the one day Americans not only tolerate ads--they’re a can’t miss part of the game-day experience. This year’s Super Bowl will be remembered by a noticeable absence of household brand names. Instead of shelling out a cool $5.5 million for a 30-second spot in Super Bowl LV, big-name brands are opting to spend that money elsewhere.

Commercial veterans like Budweiser, Kia, and Planters among others announced they would sit out this year’s Super Bowl. So what are they doing instead and does this signal a shift in brands moving away from Super Bowl advertising for good?

Budweiser announced it would drop ad time in the Super Bowl for the first time in 37 years. Instead, Budweiser's parent company, Anheuser-Busch, is donating its Super Bowl piggybank to coronavirus vaccination awareness efforts. 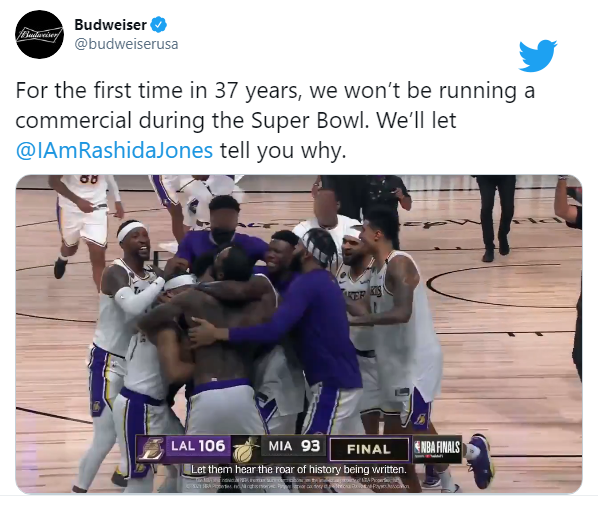 Budweiser is promoting this historic move with a digital ad narrated by Rashida Jones. The ad, titled "Bigger Picture," highlights Americans coping under the strain of the pandemic. The video ends by plugging the Ad Council’s public education campaign on the coronavirus vaccine and promising viewers the beer juggernaut would "see [them] at the game next year." From January 25th to February 4th, Bigger Picture dominated Budweiser's ad spend with 70% funneled into Youtube ads with Facebook trailing behind.

Conversely, their competitor Morson Coors took a different approach to Super Bowl advertising. They released a spot that takes the viewer into a sleep study where participants are shown images and videos related to Coors. The subjects of the study were awoken and asked what they were dreaming about (spoiler alert: it involved cracking open a cold one). Unlike Budweiser, Coors opted for an aggressive push across social, throwing 54% of their ad spend behind Instagram and 90% total across social channels.

Kia also announced it would break its 11-year Super Bowl streak, citing a shift in priorities during COVID-19. In addition to Kia, Audi, BMW, Lexus, Porsche, Mercedes-Benz, Volkswagen and Ford are among the auto brands who have decided not to run any Super Bowl ads this year. Kia’s decision to sit on the sidelines comes shortly after a significant investment in New Year’s Eve marketing.

In the week leading up to the Big Game, Kia’s top creatives don’t hint at anything Super Bowl related. Likewise, their campaign to promote the Kia Sorrento shows over half of their ad spend was funneled into news and trade websites.

Planters revives Mr. Peanut but not for a Superbowl spot

Planters is giving away the $5 million it would have spent on a Super Bowl ad spot and using it to recognize people doing charitable acts. The brand’s “A Nut Above” campaign aims to recognize people who step up to help in their community, whether it be a couple who donated the catering of their canceled wedding to the less fortunate or someone who paid a neighbor’s overdue rent. 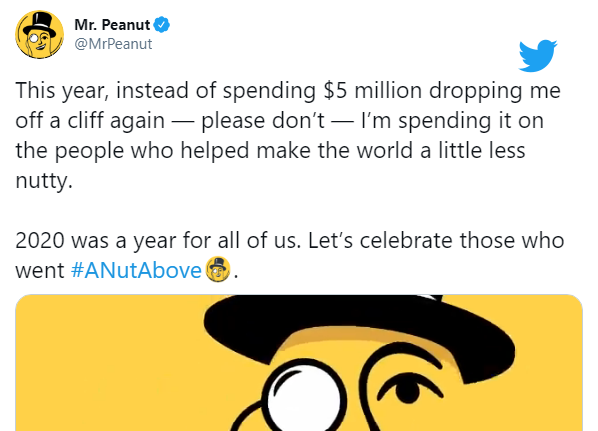 A Nut Above campaign was at the center of the 73 creatives ran through January 25th and February 4th. The brand took a social media-centric approach with over 90% of its $600,000 spend split between Twitter, Facebook, Instagram, and Youtube.

Given the events of the past year, it's understandable why brands are erring on the side of caution with their messaging or choosing to forego advertising in the Super Bowl altogether. When you tune into the Big Game this Sunday, you're likely to notice familiar brands making their Super Bowl debut. Many of these advertisers experienced significant growth during the pandemic. The question this year is, will a clear fan favorite arise from the commercial breaks or a campaign ran off the air?