As the global pandemic sent shockwaves throughout the world, lockdown measures ignited a boom in remote work. While many industries struggled to weather the COVID storm, video conferencing and collaboration software vendors, including Zoom, Microsoft Teams and Slack, reaped the rewards. In fact, the use of remote collaboration software surged over 176% in May of 2020.

Today, we'll explore how these three brands adapted their respective ad strategies to usher in a new era of business and work culture.

Despite astronomical growth, Zoom plays it safe with spend

As the world hunkered down at home and relied on technology to stay in touch with colleagues and loved ones amid national lockdowns, video conferencing apps like Zoom flourished. Following a 169% revenue increase in the company's first-quarter, year-over-year revenue growth accelerated to 355, 367 and 369% in the second, third and fourth quarters of 2020, respectively. By the end of 2020, Zoom's revenue amounted to $2.65 billion, up from just $623 million the previous year.

The brand's top creative centers on a YouTube campaign run from the end of December through mid-February, cycling through various slices of life including weddings, birthday parties, classes, business meetings, and everything in between. Amid all of the uncertainty in the world, life goes on and Zoom powers it. They primarily leaned into video as the backbone of their creative strategy, pushing new features and functionality (i.e., Zoom Phone, Zoom with PayPal integration, and AI functionality integrated into Zoom Rooms). We observed desktop video and display ad spend increased in April and remained relatively low for the rest of the year before desktop video ad spend spiked to an all-time high in January.

Zoom dedicated 72% of its ad budget to direct channels, with the remainder funneled into DSPs and ad networks. When looking at spend share, YouTube climbed to the top of the leaderboard, claiming 31% of their total budget, followed by Twitter at 12% spend share.

Slack squares up with email providers 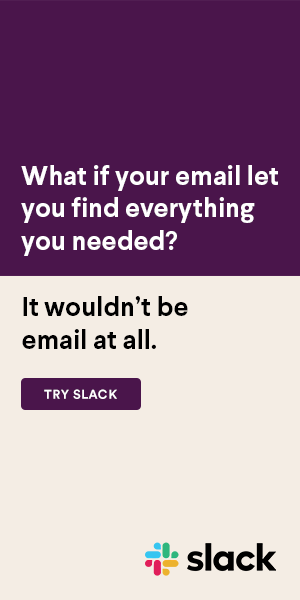 Even before the Coronavirus, the remote work collaboration software reported extraordinary levels of user engagement, with reports showing the application was reportedly open 9 hours per day with an average engagement of 90 minutes per day; compared to YouTube with 40 minutes of average engagement per day. From 1 million users in 2015, Slack exploded to 10 million active users by March 10th, 2020. One week later, the company ballooned to 11 million active users and 12.5 million the following week.

Slack's overall campaign strategy, messaging and copy remained consistent throughout this period, with ads probing their audience in bold font, "What if your email let you find everything you needed? It wouldn't be email at all." The ads indeed give a side-eye to the limitations posed by most traditional email platforms. Here, Slack is positioning itself as the one-stop remote work solution with thousands of integrations to provide the user everything they need to streamline business operations, internal communications and project management.

The brand's monthly spending trends peaked in April ($1,980,800) before declining for the remainder of the year. Even as more minor bumps in spend cropped up throughout the winter months as state governments reimposed lockdown measures, spending did not return to its early pandemic levels.

Microsoft Teams has registered an impressive rise in its user base despite the tough competition from competitors like Google Meet and Zoom. Last year, Microsoft Teams had emerged as one of the most widely-used platforms for virtual meetings. Despite this, the platform now boasts over 145 million daily active users worldwide, a 26% increase since October 2020.

Teams strategy employs polished, professional ad creative that flexes the software's latest features (i.e., Together Mode) and leverages real meeting footage from users sharing how they use Teams to get business done. Their creative is upbeat and hopeful, focusing on the positive without ever mentioning the pandemic. Instead, Teams opts to focus on the functional benefits of the software and how it will innovate business practices in an era of remote work.

Reviewing the brand's monthly spending trends for this period, spend didn't start to pick up for Teams until May before reaching its peak in June ($2,859,300). While both Slack and Zoom took a more aggressive spending strategy throughout the winter, Teams laid low until early 2021 when both desktop display and video ad spend began to increase.

Ad strategy aside, all three platforms and the remote collaboration software niche as a whole helped to steer us into a new era of how we work, collaborate and communicate with our colleagues, peers and loved ones. There is no doubt the pandemic has had a profound effect on how we work. If businesses continue to adopt these remote solutions properly and carefully select the right tools for their organizations, they'll serve as invaluable assets for success in a post-pandemic world.