While many people turn to traditional prescribed medications, there's a new(ish) kid on the block that has gained increased traction in recent years, as natural remedies have gone mainstream: cannabidiol (CBD). The chemical derives from the cannabis plant and is commonly used in “medical marijuana” products to aid individuals suffering from the aforementioned ailments.

Despite the chemical compound’s controversial mother plant, the CBD industry is primed for innovation as startups and enterprises take advantage of the substance’s versatility. The global CBD market was valued at $429.4M in 2020 and is expected to reach $19.1B by the end of 2026, mostly due to growing acceptance and use of the product. The market boom will force contenders in the market to get creative with their marketing to get the attention of consumers.

We’ll take a look at three CBD brands: MedTerra, CBDistillery, and cbdMD, to see how they’re standing out to consumers with their digital ad strategies in 2021. 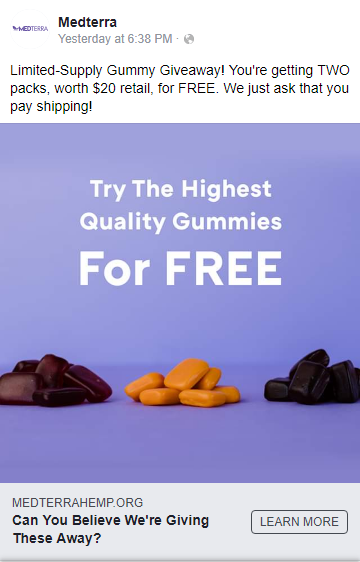 Medterra’s Facebook ad spend remained consistent with a slow linear growth starting at $65K in January 2021 and gradually increasing to $84K by May. The brand’s Desktop Display ads started at $70K at the beginning of the year. Despite the high initial spend, the channel gradually dipped to almost $57K in February and dramatically dipped to almost $26K in March.

After Facebook, Leafly.com ($129K) and MedicalNewsToday.com ($72K) are Medterra’s second and third top invested sites, respectively. The brand’s investments towards these sites indicate they are directly hitting the market customer base by trying to reach conscious consumers who may be looking to try CBD products for health benefits.

Medterra’s top creative ad investment was a Facebook ad estimated to cost almost $72K. The ad offered to educate consumers on what CBD is and alluded to the chemical’s use as a recovery supplement. Other creatives offered consumers free samples of the brands’ CBD gummies. Unlike the other brands we’re looking at, Medterra is the only one promoting free samples to entice new consumers who have yet to try the product and are wary of investing top dollar. 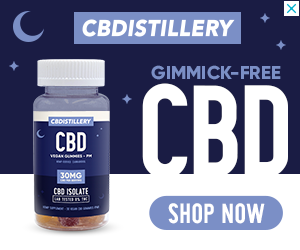 CBDistillery invested over $1.1M towards its digital advertising in 2021. Desktop Display ads make up 85% ($965K) of the brand’s total digital ad strategy followed by mobile display ads at 12% ($134K) and Facebook ads as the remaining 3% at almost $29K. 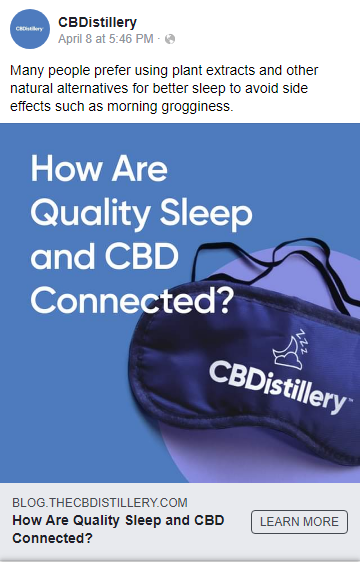 CBDistillery’s digital ad strategy stands out in the brand’s top invested sites. Unlike its peers, the brand targeted sites that cater to a young audience with a love for internet culture. Through indirect ad investments, the brand’s top sites include knowyourmeme.com ($514K), cracked.com ($284K), and cheezburger.com ($113K).

The brand’s top creatives highlight the product’s “gimmick-free” messaging and focus on the product’s ability to provide relief for stress and insomnia.

cbdMD has invested almost $1.6M towards its digital advertising since the beginning of 2021. The brand’s most invested digital ad platform was Facebook at 40% ($618K), followed by Desktop Display at 34% ($526K). Instagram at 17% ($268K), and Mobile Display at 9% ($147K). From the beginning of the year, cbdMD’s spending was steady across all four platforms with each spend gradually reaching peaks and valleys. 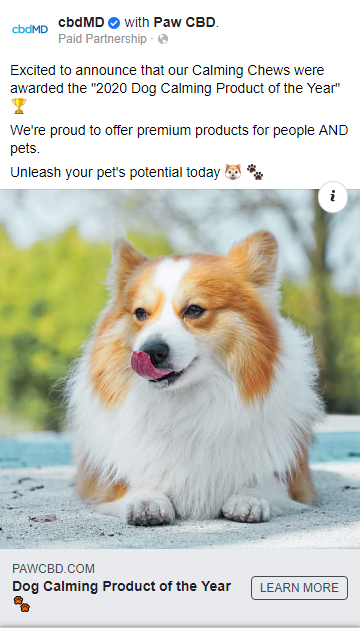 Unlike many brands in the CBD market, cbdMD stands out with its award-winning line of products made for pets. Our furry friends need relief too and cbdMD put their pet products front and center in their digital ads. Where’s a better place to reach pet owners than Facebook? The brand’s most invested creative ($54K) was a Facebook ad promoting the brand’s Paw CBD line and its award win (2020 Dog Calming Product of the Year!) for its Calming Chews product. Five of the brand’s top 10 creatives were Facebook ads featuring the Paw CBD line. The other top creatives focused on the product’s pain relief benefit for people, providing a full view for consumers of the brand’s products for humans and animals. Behind Facebook and Instagram, cbdMD invested in medicinenet.com ($196K), foxnews.com ($171K), and webmd.com ($44K) to reach a wide range of consumers, possibly looking for pain relief.

The Cream of the Crop

The CBD market boom will lead to many opportunities for discovery, but looking at today’s brands, we already have an idea of how to best succeed.

Brands looking to engage customers for their CBD products should focus on giving consumers an accessible entry with samples, finding their niche audience, and also creating a differentiated product. The CBD industry is used to breaking boundaries, and we’ll keep our eyes open to see how they continue breaking boundaries with their digital advertising.

Have you tried a CBD product from one of the brands we’ve looked at today? Let us know!

How Health Insurance Companies are Advertising The COVID-19 Vaccine