In the early months of 2020, outdoor recreation was an $887 billion industry, quickly outpacing the nation's GDP growth. When the WHO declared COVID-19 a global pandemic, a resilient and inventive economic sector was suddenly slammed by a tidal wave of shuttered retail stores, disruptions in the supply chain, and widespread layoffs.

The pandemic restricted many Americans from participating in the activities we relied on for health, joy, and work. Or did it? According to a study released by the Outdoor Industry Association in April, May and June of 2020, droves of Americans flocked to the outdoors amid COVID restrictions. If outdoor recreation experienced a boom, how did its key retail players reckon with the duality of financial uncertainty and record demand?

Let's take a deep dive into how three prominent brands in this sector, REI, Backcountry, and Dick's Sporting Goods, adapted their digital ad strategy in a year that simultaneously broke and built an industry. 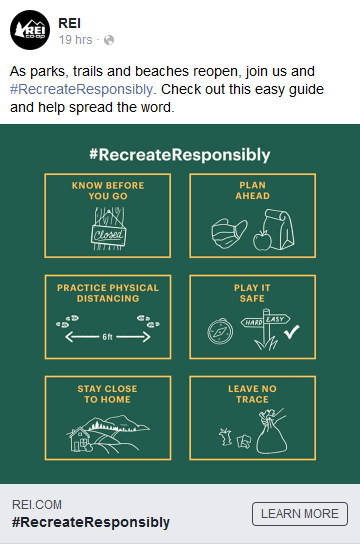 Like most others in the retail space, REI shuttered its stores as the pandemic swept through the U.S. Once the company reopened its stores, demand for all things outdoors soared, with people turning to the Seattle-based retailer to purchase their first pair of hiking boots. The company made it through 2020 in better financial shape than initially projected. Still, in late February, REI's VP of Marketing, Vivienne Long, announced that while the outdoor retail giant narrowly avoided sinking into the negative, they had not made a profit and would issue a "member reward" in place of the traditional co-op dividend.

No doubt, the pandemic has only served to stoke Americans' love for National Parks. In recent months, public lands have experienced record visitation levels; Yellowstone National Park just had its busiest September on record, with more than 800,000 visits—a 21% increase YOY. REI's top creative of the year shows a camper van driving towards snow-capped mountains in the distance, pointing the ad's audience to their co-op journal, or knowledge base, to help plan their national parks road trip. 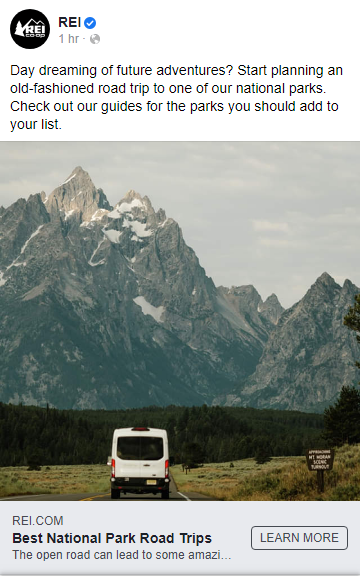 Ad spend dropped in March until bottoming out across all channels in June. REI was one of many outdoor brands, including Patagonia and The North Face, to pull their Facebook advertising after the platform failed to implement policies that addressed content that spread racism, hate and violence and misinformation on voting. In January 2021, Facebook ad spend increased once again until hitting its peak in February, surpassing $1.5 million in Facebook ad spend. All told, REI dedicated the majority of its ad budget to Facebook, with 84% ad share funneled into the platform, followed by Instagram (3%), YouTube (3%), and Twitter (2%).

Backcountry is an online specialty retailer offering top-notch outdoor gear, accessories and apparel. In June of 2020, amidst the COVID-19 pandemic, the company announced major changes in its chain of command. The company's board of directors named Melanie Cox as its new chief executive officer and Sarah Crockett as their new chief marketing officer. Despite supply chain shortages, Backcountry-owned brand Stoic launched its new fall 2020 camp collection boasting an extensive selection of premium outdoor gear, including tents, sleeping bags, sleeping pads, tables and chairs. With a change of leadership, strategy and new product releases, let's see how and if the pandemic impacted Backcountry's ad strategy.

Backcountry's point of differentiation is its customer service and expertise in all things outdoor gear and apparel. In their creatives, Backcountry's message is clear, "If you have any reservations or questions on your gear purchase, our Gearheads are here to steer you towards 100% satisfaction." The brand's spending trends slowly declined until it reached its lowest point in June with $44,000 monthly Facebook ad spend. Spending then steadily increased until hitting its peak in November, with over $340,000 poured into Facebook to promote their winter sale in anticipation of a busy winter season on the slopes. Backcountry's ad strategy was slightly more diversified than REI's, with 63% ad share going to Facebook, followed by Instagram receiving 17% ad share.

Dick's Sporting Goods quickly pivoted its operations and marketing strategy when the coronavirus struck in March. Shortly after closing its 800 stores in April, the company beefed up its online catalog and offered contactless curbside pickup. The company reported record earnings and sales in the three months through June amid a spike in demand for health and fitness products. In-store sales jumped 21% YOY, and online sales soared 194%, including curbside pickup.

The sports retailer also announced its plans to open two outdoor-only retail concepts, called Public Lands, in Pittsburgh and Columbus, Ohio, a clear indicator the company intends to position itself as a player in the technical outdoor gear market. Top creatives of 2020 include video spots touching on the company's commitment to fostering family connection in the outdoors, whether through throwing a baseball in the backyard, shooting hoops in the driveway, mountain biking, or hiking.

Dick's ad strategy was the most diverse of all three brands, with ad share evenly split between Facebook (33%), Instagram (33%) and YouTube (27%). Spending hit a low in April then picked back up, reaching its peak in the summer months for back-to-school promotions, dipping slightly in fall only to spike once more for the holiday season. Interestingly, Dick's is the only brand of the three with relatively substantial investments in indirect ad spend, dedicating 5% of their budget to DSP ads, pulling 10% of total paid impressions from Zillow and Yahoo. Still, the brand's indirect ad spend dwarfed its investment into direct platforms, with over $30 million pumped into Facebook, Instagram and YouTube ads combined.

Despite outdoor recreation being ranked as one of the most impacted industries in the pandemic, as shelter-in-place orders lifted in the late spring of 2020, outdoor recreation flourished like never before. For many Americans, the coronavirus reignited a love for wide-open spaces and deepened our relationship with the land. It's that love that may have been the outdoor industry's saving grace.

Why Budweiser, Kia, and Planters are bowing out of Super Bowl 2021