The COVID-19 pandemic has transformed some gig workers into ‘heroes,’ namely, those in food delivery. Delivery workers have become essential to American kitchens, and now, there is a greater need for more of them. In fact, US job postings related to food delivery increased 78% from 2017, according to Quartz.

Meal delivery companies are alleviating the concerns that many Americans have as they navigate drastic changes related to ongoing social distancing rules. Restaurant closings across the country have led many to realize that cooking and feeding ourselves is laborious.

And that’s exactly where meal delivery companies DoorDash, GrubHub, and  UberEATS come into the picture. Here’s what Pathmatics found on the trio’s digital ad spend as the pandemic keeps more Americans at home.

DoorDash spent $9.2M in digital ads between January and April. In Q1, DoorDash had steady spending of nearly $2M on digital ads per month. In April alone, however, it spent more than $3M. 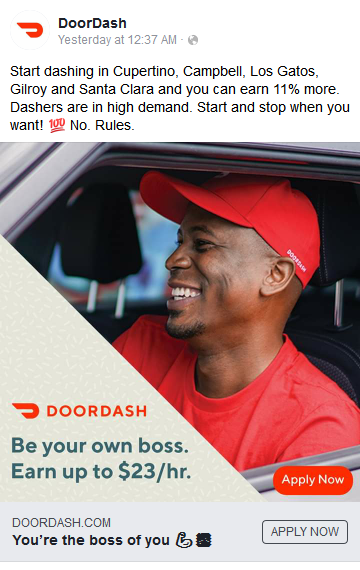 The meal delivery company implemented a strong Facebook strategy with 90% of its total ad budget invested in the platform. It spent $8.3M on Facebook ads with top creatives split evenly between showcasing food products, and recruiting employees and businesses to the platform. One ad creative highlighted a delivery worker in his car and noted how dashers are in high demand. This approach spotlights how DoorDash is looking to attract the next generation of talent to the gig economy, and how its employees make their own rules for work.

DoorDash also introduced an #OpenForDelivery campaign this year. On April 15, it spent $45K on a desktop video that stated, “While the doors may be closed the kitchens are open for delivery.” The entirety of that budget was placed on Hulu. The seven-second video ad highlighted the company’s delivery service during these uncertain times.

The company’s desktop videos were personal and visually appealing. For example, one video centered the kitchen-to-table process: it started with chefs putting on their aprons and moved on to cooking the actual food. Another video appealed to American pathos, noting how restaurants have been there for us for a long time and it is time for us to be there for them. With this ad strategy, DoorDash has positioned itself as a champion of both businesses and customers during the pandemic.

GrubHub spent more than $10M on digital ads between January and April. While the meal delivery company leveraged a mix of social, display, and desktop video posts, it invested 94% of its budget on Facebook ads. 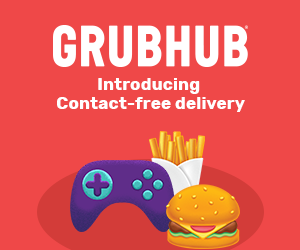 Below is a look at overall spend:

GrubHub’s desktop display ad copy amplified its contact-free delivery option, introduced in March. This is dissimilar to its Facebook strategy, as ads there highlighted specific restaurants such as Buffalo Wild Wings, KFC, and Taco Bell. Instead of food animation, these ads honed in on real food from individual menus, appealing to all five senses.

In April, similar to DoorDash, GrubHub focused on a call to action on its copy that stated, “Restaurants need us now more than ever.” Copy for top ads asked customers to help their favorite restaurants by ordering pickup or delivery from them. 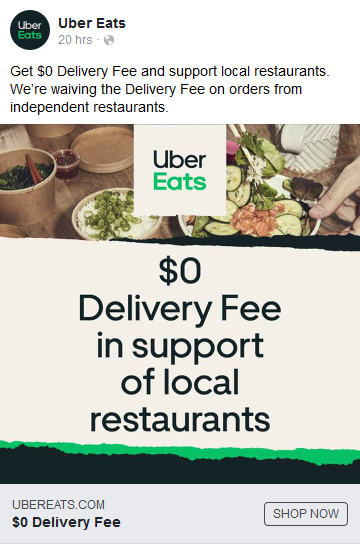 UberEATS spent $8M more on digital ads in April than it did in March. April was successful for the company, as it spent $10M on digital advertising and nearly doubled the number of creatives placed.

From January 1 through March 22, UberEATS spent less than $100K daily on digital ads. After that, the company increased its digital ad spend and focused its creatives around $0 delivery fees. Showing its support of local restaurants and the communities served, UberEATS spent $1.3M on digital ads alone on April 15. Top creatives showcased its no delivery fee on orders of $10 or more. This is aligned with Chick-Fil-A’s pledge to partner with UberEATS and bring convenience to their customers by not charging a delivery fee. This pledge went live on April 13.

While UberEATS outspent both DoorDash and GrubHub, it was not until April that it began to invest hefty sums in digital ads, likely to showcase itself as a leading meal delivery company.

While DoorDash and GrubHub explore a contactless delivery experience, UberEATS shows that partnerships with large restaurant chains is how brands can make a splash with customers.

As Americans continue to navigate their new experiences with food, these meal delivery companies are rising to the occasion, keeping the gig economy alive, while bringing dinner to homes across the nation.