Millions of Americans set New Year’s resolutions at the start of the year, many of which are health and wellness-focused – from exercising, dieting and losing weight to overall better, healthier habits. This opens a huge window of opportunity for fitness and wellness companies that wish to increase their brand awareness to reach and engage new customers. In fact, Pathmatics recorded a four-fold increase in ad spending across the fitness and weight-loss category from October 2019 to January 2020. Total spend across the category in October and November was only $62M, whereas spend from December 1 to January 21 was an estimated $273.4M.

Check out the rest of our “new year, new you” ad data insights below.

Battle of the fittest: Nutrisystem vs. ICON Health & Fitness

Brands including Planet Fitness, Weight Watchers, and GNC are consistently top spenders in their category, though no other brands compare against Nutrisystem and ICON’s ad spend in the last four months. The two companies have battled for the top spender spot in their category, with Nutrisystem spending $4.2M from October to November and $5.5M from December to January. ICON spent $3.5M and a whopping $8.2M for the same time periods, respectively.

ICON spent heavily on digital advertising during the holidays on its at-home, interactive personal training equipment. During the 2017 holiday season, the company spent 80% of its ad spend on Facebook, and has diversified its ad mix since introducing a number of high-quality video ads. And while earlier ads feature messaging around the company’s holiday sale, ads in December and January focus on a targeted approach to men and women with messaging around conquering your New Year’s resolutions.

Nutrisystem took a different approach – though with a similar advertising mix – spending majoritively on Facebook, desktop display, and desktop video ads. While the company heavily advertised a two-for-one sale in October and November, it introduced new personal weight-loss plans and a corresponding ad campaign in December that features brightly colored ads and no mention of the holidays. Though Nutrisystem doesn’t directly cite New Year’s resolutions in its ad copy, it’s safe to assume personalized plans would support one’s resolution to find a weight-loss regimen that suits their lifestyle and needs.

This isn’t far off from Nutrisystem’s typical holiday ad strategy, as the company has previously advertised 40% off New Year’s sales and has consistently advertised across desktop video, desktop display, and Facebook in recent years.

While ICON and Nutrisystem had robust ad strategies since October, the only company highlighted in the fitness and weight-loss category that leveraged all digital ad channels was the General Nutrition Corporation, informally known as GNC.

GNC spent $3.6M on digital advertising in the last four months. Over half its budget goes toward social media ad spend, with Facebook accounting for 55% of total spend, and a small fraction ($4K) spent on Twitter. In fact, despite the small Twitter ad spend, GNC was the only top advertiser in its category to advertise on the platform. This is likely because Twitter’s reach is much smaller  in comparison to Facebook, which hosts nearly 20% of the world’s population. 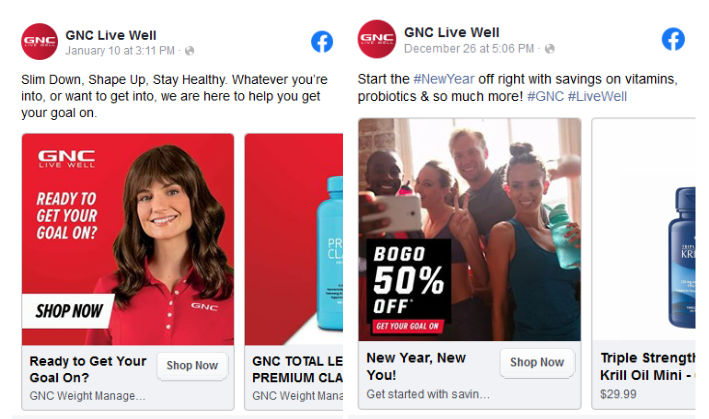 Social media ad spend was a common theme throughout the fitness and weight-loss category. Nearly every brand on Pathmatics’ Explorer top 15 list in this category from October to January has invested in Facebook ad spend – no surprise given the platform’s in-depth ad targeting and broad audience reach.

Overall, category advertisers spent an estimated $42M on Facebook in October and November 2019. That number nearly doubles to $76M in December and January 2020, proving Facebook’s strong reach of the general consumer market.

YouTube was also a surprisingly popular channel for fitness and weightless brands to promote their products and services. This is likely due to fitness influencers who post regular vlogs, workouts, and recipes on their YouTube videos.

Fitness brands know there’s already a captive audience on YouTubers’ channels: take Organifi, the superfoods company, for example. Organifi split 96% of its digital ad spend between desktop and mobile video since October, and just over $4M directly on YouTube.com and influencers’ YouTube pages.

Fitness and weight-loss brands significantly upped their ad game around the holidays to take advantage of Americans’ continued New Year’s resolution traditions. While brands such as Nutrisystem and ICON outspent competitors to raise brand awareness, other companies such as GNC and Organifi mainly stuck with targeted social strategies to ensure they could reach those trying to realize their fitness resolutions.

The ads worked — now it’s time for consumers to work out.