Encouraging employees to quit sounds counterintuitive, but it's exactly what Amazon founder Jeff Bezos has done.

According to The New York Times' ”The Daily” podcast, Bezos has created a system that not only accepts but encourages employee churn to keep workers fresh, and even offers incentives for some to leave. As a result, Amazon's turnover rate for hourly workers, even before the pandemic, hovered around 150% — nearly double that of similar businesses.

This, along with Amazon's meteoric growth, means that the company is constantly recruiting new employees — something that has been made exponentially more difficult by the pandemic labor shortage.

We know from “The Daily” that Amazon has hired over half a million workers during the pandemic. Which led us to wonder: How is Amazon using digital advertising to attract new employees? And how has their strategy changed during the pandemic to now?

Amazon is consistently a top advertiser in terms of spend, but the retailer has been ramping up its ad budget during the pandemic. Not only did spending nearly double from 2020 to 2021, but it also increased more than 1.5X from the first half of 2021 to the second. 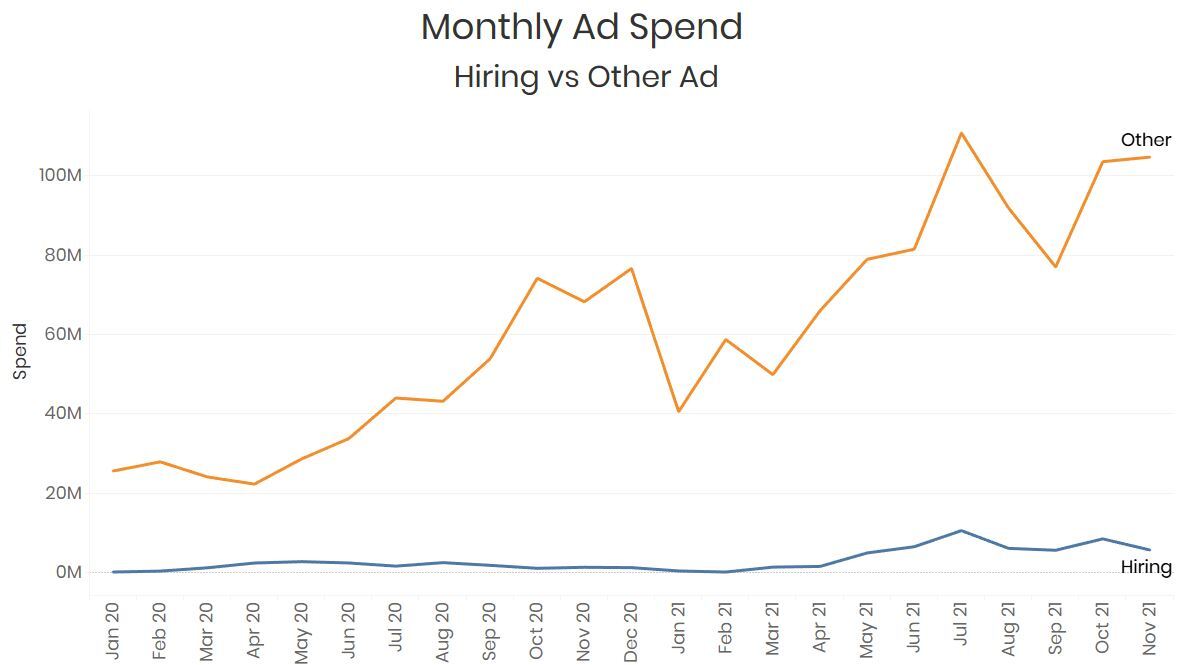 While the majority of this spend has gone toward product ads, Amazon has been putting a portion of its budget toward promoting job opportunities. Between January 2020 and November 2021, roughly 5% of Amazon's $1.46B digital advertising budget went toward recruiting ads. That might not seem like a lot at first glance, but with a budget as large as Amazon's, it works out to an eye-popping $69.88M!

While Instagram was Amazon's top channel to advertise overall, the retailer relied heavily on Facebook to get the word out about open positions. Sixty percent of Amazon's hiring ad spend went toward Facebook, compared to only 23% of its total spending for other ads.

Amazon.com has a total of 79 different Facebook pages, with one of the pages, “Amazon Fulfillment Jobs“, being specifically job-related. Looking at ad spending for this page, what stands out is how much more Amazon spent in 2021 ($26.9M) compared to 2020 ($942.8K).

During this time frame, Amazon ran more than 173K unique creatives — over 4.4K of which were for hiring — so we examined these to see how their advertising has changed.

We first started noticing a shift in Amazon's hiring ads in mid-March 2020. As lockdowns started and many people were out of work, Amazon seized the opportunity and began running a series of Facebook ads with a CTA to “find a job now” with no resume or previous work experience required. 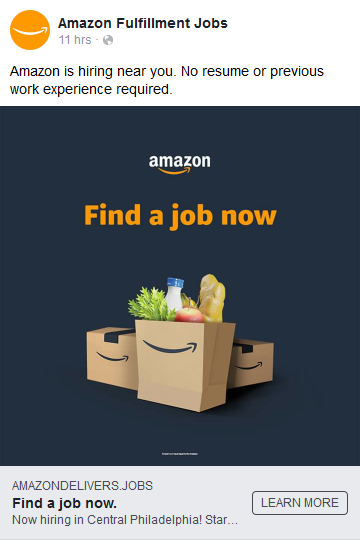 Ads targeted primarily male audiences in Boston, New York, and Philadelphia, as well as Ohio, Massachusetts, and the rest of Pennsylvania.

This strategy appears to have worked: By July 2020, Amazon was bringing on 2,800 new employees a day. Variations of these hyper-targeted local ads continued running steadily throughout 2020 and early 2021.

Then, in May 2021, Amazon announced that it would be hiring 75,000 employees across its fulfillment and transportation networks, and hiring ad spend jumped from $1.5M in April up to almost $22M between May and July. 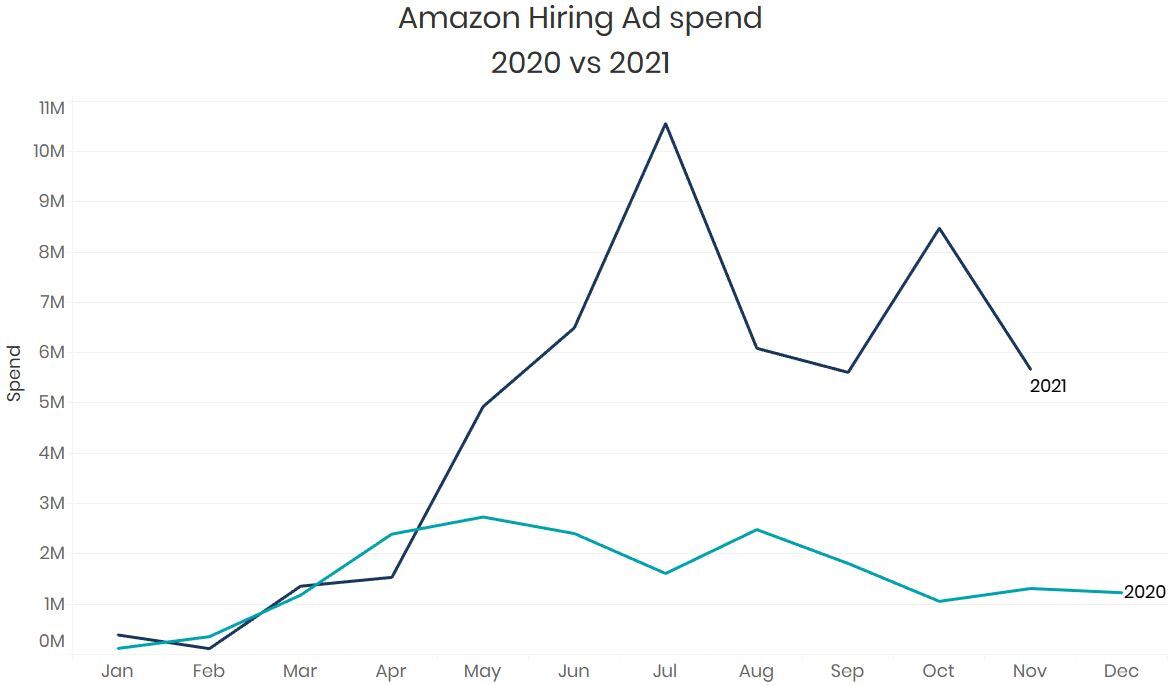 One of its top creatives during this time period is an ad for sign-on bonuses up to $1,000 and pay up to $20/hr. The ad first appeared on May 22 and amassed 664M impressions and $6M in spend. Ads targeted California and New York, with 14% of Facebook spend share going toward New York City.

This period of high spending also coincides with graduation season. Perhaps Amazon, needing to fill thousands of open roles, was hoping to scoop up recent graduates by dangling offers of better pay and bonuses. Compared to 2020, Amazon spent 3X more on hiring ads during the 2021 graduation season.

By October, we again saw a spike in spending for hiring ads. At this point, eight of Amazon's top ten hiring creatives were advertising sign-on bonuses.

Texas is now getting the most targeted spend (17%), followed by California, New York, and Illinois. We know from an October press release that Amazon needed to hire 150,000 seasonal workers ahead of the holidays, and that these are among the states with the greatest number of seasonal roles, so it makes sense that they are receiving the most advertising dollars. 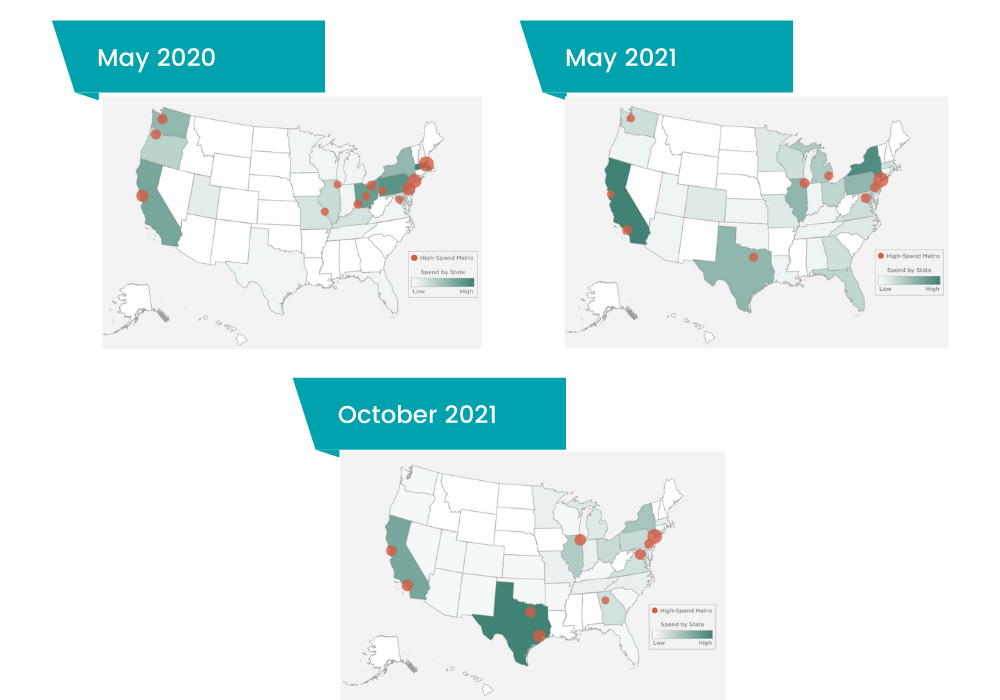 November brought even more tempting offers, with sign-on bonuses up to $3,000, wages up to $22/hr, weekly pay, and the option to “choose your shifts”. Clearly, Amazon was doing everything in its power to woo new employees — but competition for hourly workers is fierce, and Amazon isn’t the only one advertising job openings.

Aldi, Coca-Cola, DoorDash, and McDonald’s are among the brands we’ve seen running hiring ads recently. Like Amazon, many of these brands         are advertising higher wages, flexible hours, and bonuses to sweeten the deal. 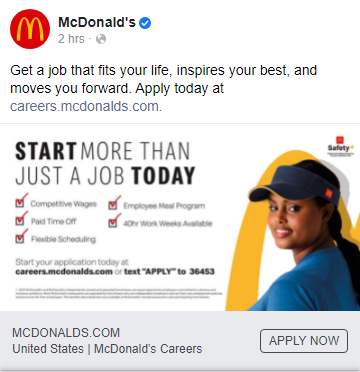 So, will it be enough? The labor shortage doesn't appear to be easing soon, and we know that     Amazon is opening an additional 33 fulfillment centers this year alone, so it’ll be interesting to      see how its ad strategy evolves as its appetite for new workers continues to grow.