And then there's the holy grail of fall flavors, the drink that launched a thousand memes: the Pumpkin Spice Latte. Starbucks may have started it all, but other coffee shops like Dunkin' Donuts and Peet's Coffee have also dived headfirst into the fall drink trend.

As we enter peak PSL season, here's how coffee shops are spending across channels to grab thirsty shoppers' attention.

Starbucks might have made PSL famous, but Dunkin’ (Inspire Brands, Inc.) takes the top spot in terms of spend. The donut shop has spent $8.1 million on ads in the last 30 days, generating over a billion impressions. This accounts for roughly half of all spend and impressions among fast food cafes and coffee shops.

However, it appears Einstein stopped making its pumpkin spice drinks last year. For that reason, the rest of this article will focus on the top 4 advertisers and the runner-up, Peet’s.

While most of us were still sweating in the summer heat, Dunkin's advertising team was busy pumping out PSL ads.  Pathmatics Explorer picked up the first fall ad on August 18: 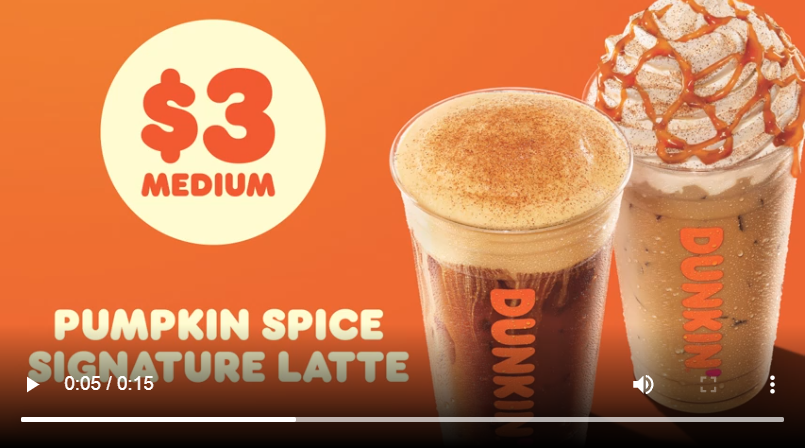 That's a full day earlier than last year, according to our ad intelligence data — which might not seem like much unless you’ve been waiting all year for a pumpkin spice latte.

Perhaps all the buzz about Dunkin’s fall menu made Starbucks nervous. The Seattle-based chain also started advertising on August 18, even though its fall menu didn’t return until August 24. In fact, it’s the only coffee shop we saw that started running pumpkin spice ads in advance of its fall menu launch.

Peets’ fall drinks reportedly returned on August 25, but Pathmatics Explorer didn’t pick up any pumpkin spice ads until the 30th. Dutch Bros. didn’t start advertising its Caramel Pumpkin Brulée drinks until September 1, and Krispy Kreme didn’t advertise its pumpkin coffees at all — although it did spend a significant share of its budget promoting its Pumpkin Spice Donuts. 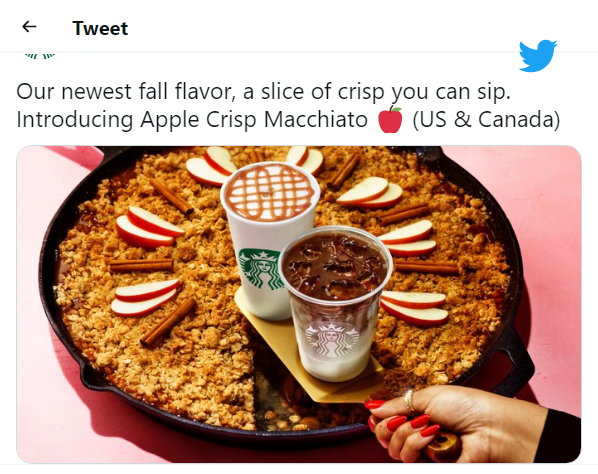 Given how early coffee shops are releasing their pumpkin spice drinks, it makes sense to see more cold brew options on the menu.

In addition to its fan-fave Pumpkin Spice Signature Latte, Dunkin’ has been advertising a new Pumpkin Cream Cold Brew this year. It poured over $1.5 million into online ads for the launch in September, with four of its top ten creatives in the last month featuring the new drink. 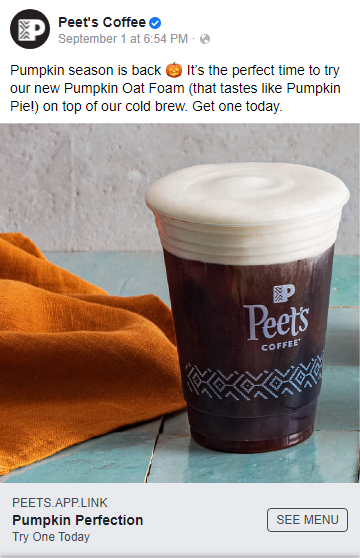 This particular ad first appeared on September 7 and received $396K in spend and 79.7B impressions.

Peet’s took things a step further than both Starbucks and Dunkin’ and launched a plant-based Pumpkin Oat Foam Cold Brew. While you might expect such a trendy drink to get double the hype — pumpkin spice AND oat milk — Peet’s ads don’t even mention the fact that it’s plant-based. Nor did the new drink appear in Peet’s top creatives during September. Instead, it opted to focus mostly on promoting its fall limited-release roasts rather than on seasonal beverages.

No surprises there. Facebook ads made up 70% of Dunkin’ and Peets’ spending, while they accounted for 51% of both Krispy Kreme and Dutch Bros. budgets.

Starbucks was the only brand that didn’t devote more than 50% of its budget to Facebook. In fact, it only spent 12% of its advertising dollars on the platform. Instead, it allocated the majority of its budget toward Instagram (77%).

So what’s behind Starbucks’ Instagram-heavy strategy? We do know that Starbucks’ PSL has its own official Instagram account, and as Adweek pointed out PSL posts receive 493% more likes than Starbucks' regular posts. Knowing this, it makes sense that Starbucks is trying to capitalize on this success with its paid advertising as well.

Krispy Kreme and Dutch Bros. also opted to focus on Instagram, though not as heavily as Starbucks. Both brands spent 48% of their budgets on the platform, while Peet’s spent 28% and Dunkin’ 18%.

Interestingly, Dunkin’ was the only coffee shop to advertise on YouTube. Maybe Dunkin’ saw an opportunity to stand out from the rest of the pumpkin spice pack and reach YouTube’s 2 billion users. Likewise, only Dunkin’ and Starbucks chose to advertise on Twitter.

It might come as a surprise that only Dutch Bros. and Krispy Kreme increased their ad spend in September. The rest of the brands we looked at actually spent less money heading into the fall.

Perhaps this has to do with the fact that fall is the strongest season for coffee sales, so advertisers have to do less work to get customers through the door. But with pumpkin spice season in full swing, it’ll be interesting to see whether the competition heats up.

We’ll keep you posted with more caffeine-fueled insights courtesy of Pathmatics Explorer. In the meantime, schedule a custom insights session to understand advertising habits in your industry.