This post was originally published on the Comperemedia blog.

August signals the end of summer and the kick-off of back-to-school (BTS) shopping. Retailers mirror parents’ enthusiasm for this time of year as it’s their second busiest shopping season after winter holiday shopping. Brands across industries – including telecom, retail, travel, and even insurance – take advantage of consumers’ mad rush for new clothes, shoes, and school supplies before the academic year starts.

According to the National Retail Federation’s 2019 survey, K-12 BTS spending is expected to reach nearly $26.2B this year, and college spending is expected to reach $54.5B, according to the National Retail Federation. While college students are more apt to search for big-ticket electronic items and dorm furnishings, the K-12 crowd is more likely to buy clothing and accessories.

In addition, the same survey found that 49% of K-12 shoppers and 45% of college shoppers anticipate spending most of their time shopping for supplies online. As a result, retailers are taking full advantage of shopper appetites with an omnichannel approach to BTS ads, with touchpoints across email, direct mail, social media, native placements, and video and static ads.

Walmart has spent $39M on digital ads so far this year, and $1.2M of that spend is dedicated to BTS. The company spent the entirety of the BTS digital spend on Facebook, which is unsurprising given the ease of connecting with BTS shoppers across the nation on the platform.

While $1.2M might sound low, Walmart had the second highest BTS spend (behind Target) of the retailers we reviewed. The brand spent about 20% of their BTS budget on ads targeted toward teachers and classrooms, while other brands chose to focus more on students and a more general BTS strategy. Walmart also ran ads aimed toward college students, promoting game days and dorm accessories.

Walmart’s strategy underscores the importance of leveraging Facebook to reach a wide audience.

Target upped the ante with $3.8M digital ad spend invested in BTS out of its total digital spend of $36M last year. They also had slightly more variety in where that money went, with 11% on desktop and mobile display ads, and the remaining 89% on Facebook.

The company’s digital creatives featured school supplies, uniforms, and a core BTS staple – Lunchables. Only 4% of the social budget went to video, while the vast majority of ads were carousel and link posts. Target surely took advantage of advertising to its K-12 audience this year, with eye-catching, brightly colored ads focused on the younger BTS shoppers. 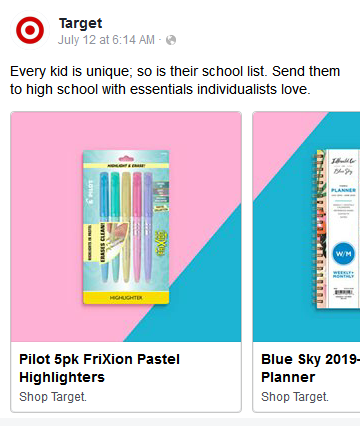 Amazon’s total digital spend in the period leading up to back-to-school season was the highest at $48M, but their spend on BTS was the lowest of the three we analyzed, at just $641K. This is likely because Amazon is (mostly) an online-only brand, which many BTS shoppers already know and love as their go-to for quick online orders. Additionally, much of Amazon’s BTS advertising happens within their website and app, with landing pages driving users toward school supplies once on the site.

Similar to Target, the online giant focused about 12% of digital ad spend on desktop and mobile, with 88% geared toward Facebook. Unlike Target and Walmart, however, 85% of all BTS ads on social were video posts. These videos followed a general school supply theme, similar to their display ads, though with heavy reliance on video.

Though other brands aren’t investing as much in video ad spend, the move is in Amazon’s best interest as it continues to roll out more ad-supported streaming services, such as IMDb TV and live sports offerings.

Where brands are missing the mark

Though Walmart spent a portion of their digital ad spend enticing teachers to shop with the company, it’s a largely missed market across the BTS board. There are 3.6 million full-time public educators in the United States and nearly all of them buy supplies with their own money. Very few brands and campaigns speak directly to this audience, so companies looking to improve their BTS ad strategies should consider focusing on teachers in addition to students and parents. Additionally, retailers should start their BTS digital advertising plans early. The most successful BTS ad campaigns begin as early as July and last through September.

To learn more about how today’s top retailers BTS marketing campaigns, check out a full recording of Pathmatics and Comperemedia’s recent webinar on the topic: Back to School Marketing: Making the Grade.