Even after receiving a government bailout, Southwest Airlines ended 2020 with a $3.1 billion loss, down 64.9% from 2019. CEO Gary Kelly reported Southwest is still losing $17 million a day and that revenue will need to double from current levels to break-even. While the airline experienced revenue gains in October, demand slipped in both November and December due to spikes in COVID-19 cases, hospitalizations, quarantine requirements, travel restrictions, and related government orders.

With advertising budgets slashed, most airlines have played it safe with their strategy, running campaigns to reassure their customers it's safe to fly and encouraging travelers to book flights with the promise of no-change fees. In a year marked with uncertainty for the commercial aviation industry's fate, Southwest went against the grain by digging its heels into Facebook digital marketing, outspending some of their direct competitors by more than $40 million. Let's look at how the Dallas-based airline dominated the online space in 2020. 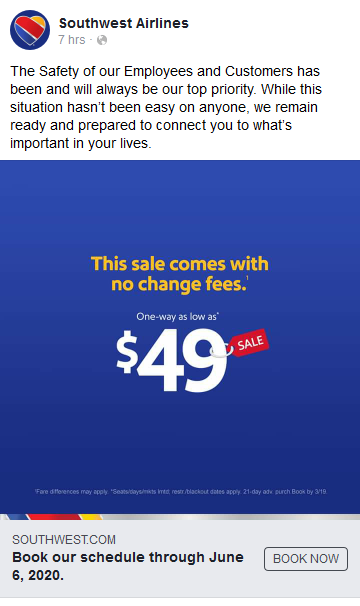 Falling in step with other airlines amid the pandemic, Southwest joined its competitors in offering passengers no-change fees. One top creative launched in mid-March features a static image advertising Southwest's commitment to their employees and customers, its no change fee guarantee and flight deals for as low as $49.

This campaign offered an attractive proposition at a moment when travelers were abruptly canceling business or leisure trips as the country prepped for a nationwide quarantine. However, Southwest had a leg up in that most airlines at the time weren't offering competitive flight deals on top of no change fees.

Southwest pushed another round of fresh video creative in September to nudge holiday ticket sales. These video spots took on a whimsical and lighthearted tone, with one creative featuring a grade school teacher leading a remote science experiment that goes awry. The ad gives a subtle nod to the times while offering a simple solution: fly away with us and leave your COVID-induced stress miles behind. 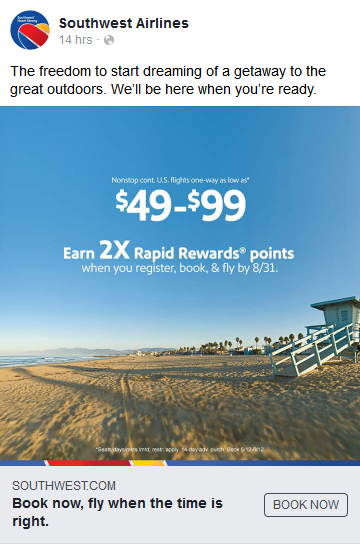 Overall, the lion's share of Southwest's ad spend year-over-year went to Facebook (60%), yielding over 3.1 billion paid impressions. The airline charged into 2020 with an energetic Facebook strategy, channeling just over $4.7 million into the platform in February alone. The airline experienced a steady decline in spend across all ad channels until hitting an annual low in April, with Facebook spend falling just shy of $100,000.

Activity steadily increased going into the summer season when the airline launched its Wanna Get Away promotion. As COVID cases began stabilizing across the country, Southwest took advantage of the lull by driving promotions across Facebook and YouTube to get passengers in the air and off to domestic and tropical destinations.

Spending also increased during the winter months, with quirky video creatives backing their Wanna Get Away winter sale. With the exception of Facebook, spending across every other ad channel remained stagnant into the first months of 2021.

So did their $42 million investment pay off? Signs point to maybe! Southwest reports it's now seeing increased bookings with beach and other "nature-inspired destinations" outperforming other regions. Southwest's brand voice was undoubtedly more prominent in a year when their competitors remained conservative in ad spend and strategy.

It's worth noting, in pre-pandemic times, brand name was a significant consideration for frequent flyers. Now, brand loyalty is at an all-time low. But even if they're hanging on by a thread, with less of an emphasis on international travel, Southwest isn't hurting like its competitors and can afford to roll the dice to attract new, loyal customers for post-pandemic getaways near and far.