With nowhere to go and nothing to do, audiences are consuming over a billion hours of video on YouTube each day. Put another way, that’s 114,155 years of watch time in a single day!

It should come as no surprise, then, that YouTube is the most popular website to advertise on right now. In fact, savvy advertisers funneled nearly $9 billion into YouTube ads in the last 12 months.

We dove into Pathmatics Explorer to look at the top YouTube ad moments from the year, analyze the biggest campaigns pushed live month-to-month, and explore winning video strategies.

YouTube has about 2 billion users — almost one-third of the internet. In the past 12 months, advertisers spent $8.9 billion to reach these users, garnering over 732.4 billion impressions. That’s a huge uptick from the previous 12 month period, which saw only $3.1 billion in spend and 279.4 billion impressions.

Direct advertisers comprised 100% of YouTube’s ad sales, although 5% of its impressions came from house ads. 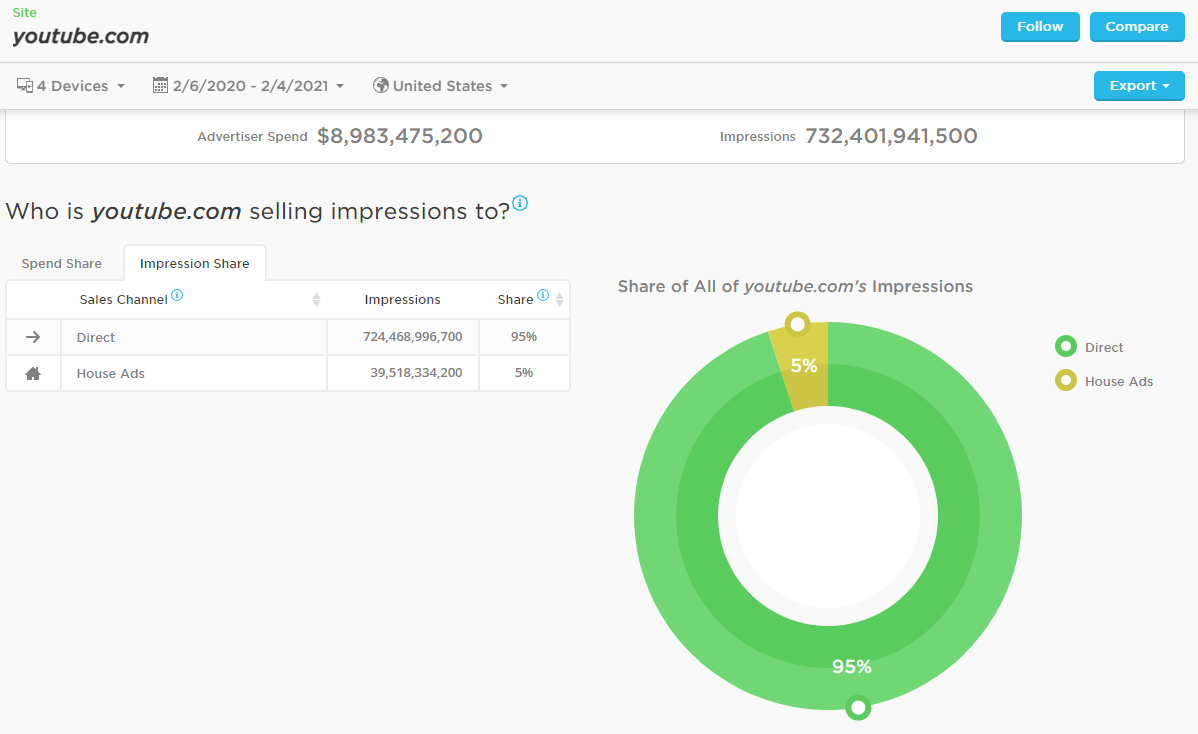 According to YouTube, more than 70% of watch time comes from mobile devices. However, 96% of YouTube’s ad spend and 97% of its impressions were generated from desktop ads. It would appear that advertisers have better luck targeting their audiences on desktop than mobile on YouTube.

Now, let’s take a closer look at some of the top advertisers on Youtube and the creative ways they took advantage of video during this unprecedented year.

Notoriously absent from Facebook, YouTube has been Apple’s top site to advertise on. The tech giant devoted $237.5 million to YouTube — or 79% of its total ad spend — over the past 12 months.

Apple’s strategy revolved around promoting its product launches. Take the Apple Watch, for example. Although ads for the new Apple Watch only comprised 7% of Apple’s total spend on YouTube, this ad was one of its top creatives in terms of spend over the last year: 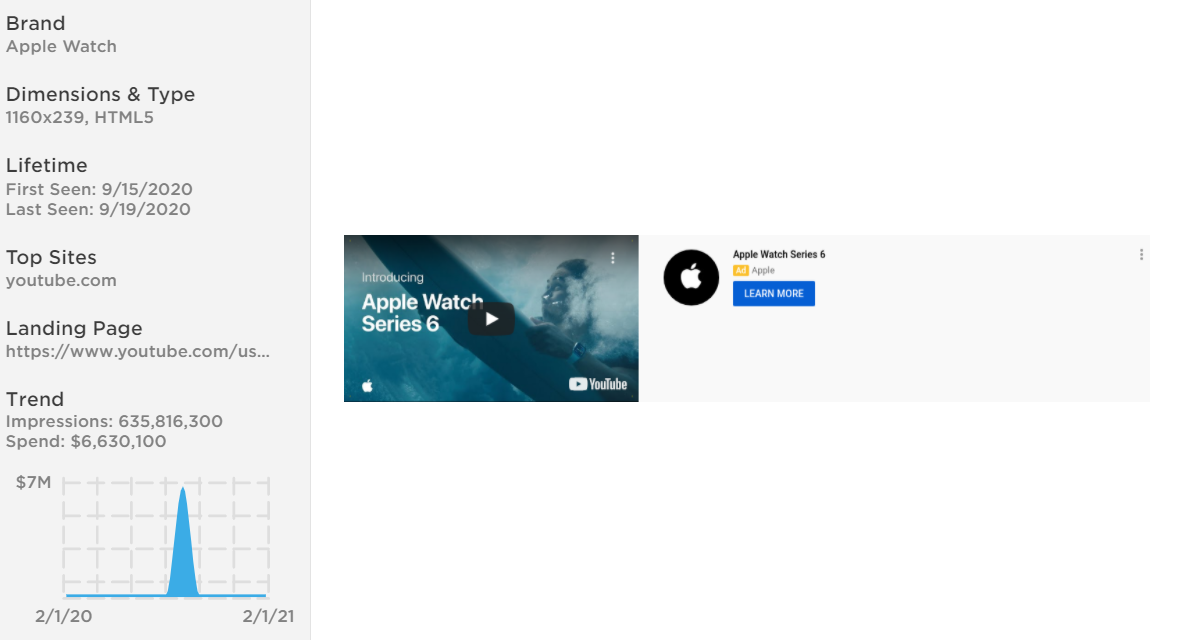 Despite only running for less than a week, it scooped up over 635 million impressions and $6.6 million in ad spend. Apple also devoted a significant portion of its budget toward the iPhone 12 launch.

Interestingly, though, Apple TV (39%) and Apple TV+ (38%) accounted for the lion’s share of the company’s spend on YouTube. It makes sense, in a way: these people are already watching video, so it’s a safe bet they’ll be interested in other streaming services as well.

Disney also picked YouTube as one of its top sites to advertise on, spending $177.5 million or about a third (36%) of its advertising dollars on the site during this period.

Taking a closer look, 100% of Disney’s spending on YouTube went toward promoting its Disney+ streaming service. Like Apple, Disney seems to be trying to capture the attention of quarantined customers hungry for something new to watch. Take this ad, for example, which features a montage of shows from its Disney+/Hulu/ESPN+ streaming library: 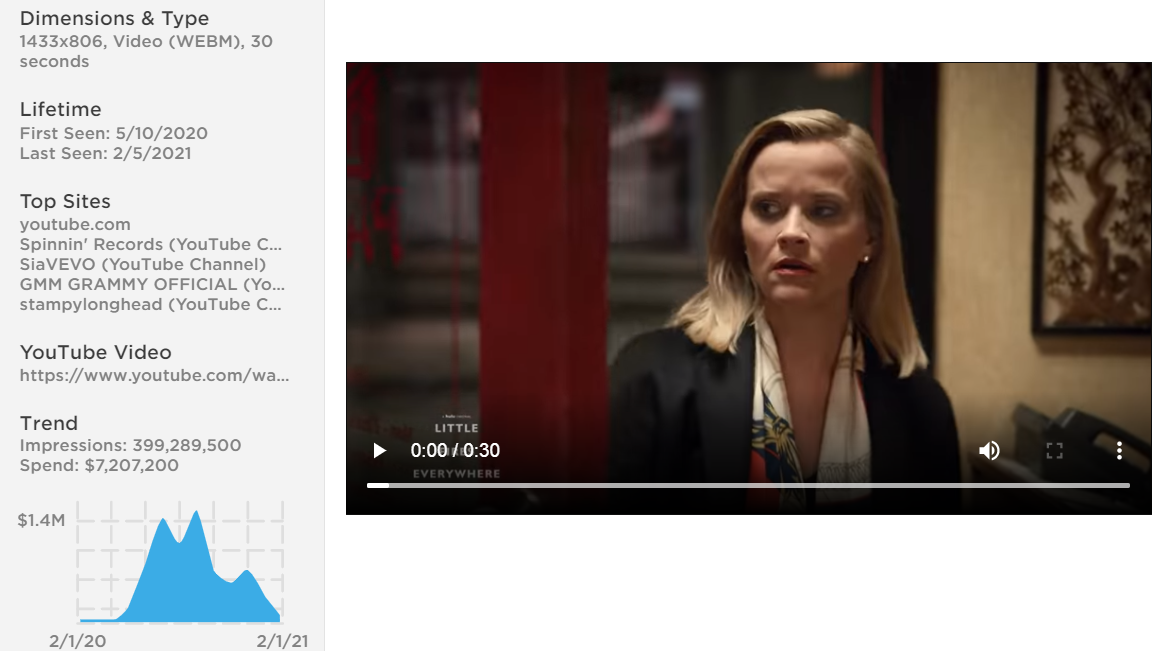 If you hung out on YouTube at all this year, there’s a good chance you saw at least one political ad. That’s because the Biden and Trump campaigns poured a combined $262 million into advertising on the site over the last year.

While both campaigns prioritized YouTube as their top advertising channel,  the Trump campaign outspent Biden by $30.5 million:

Looking more closely at the data for both campaigns in Pathmatics Explorer, YouTube ads made up a larger portion of the Trump campaign's overall advertising spend (96%) than Biden’s (88%). 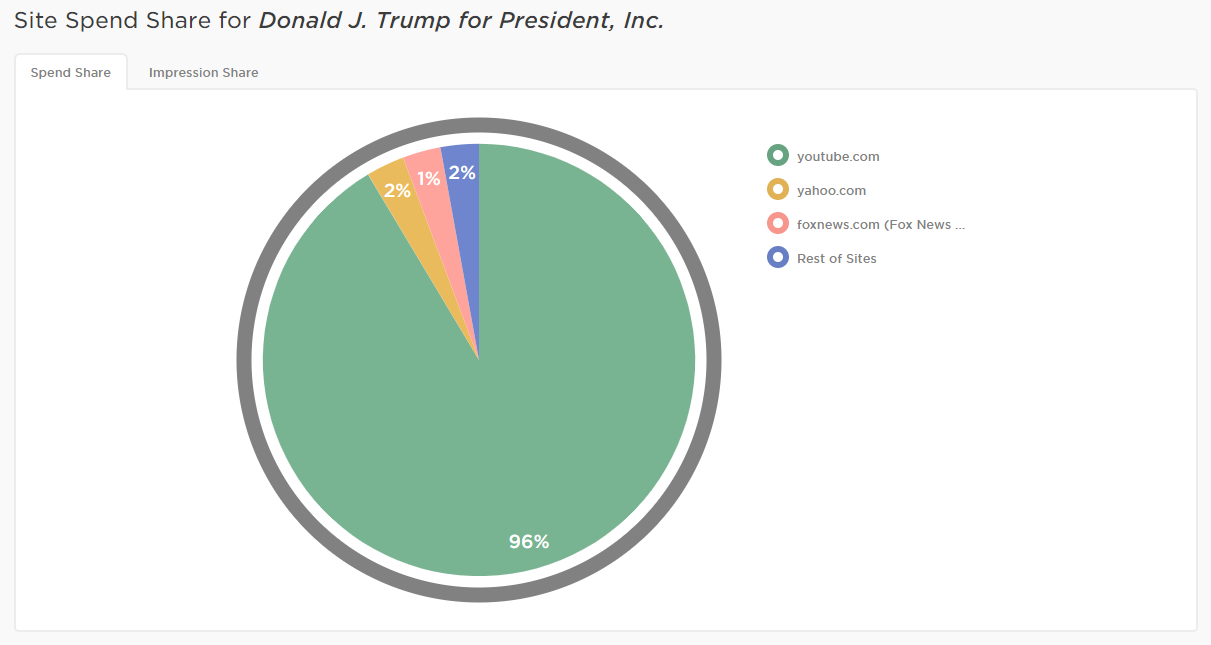 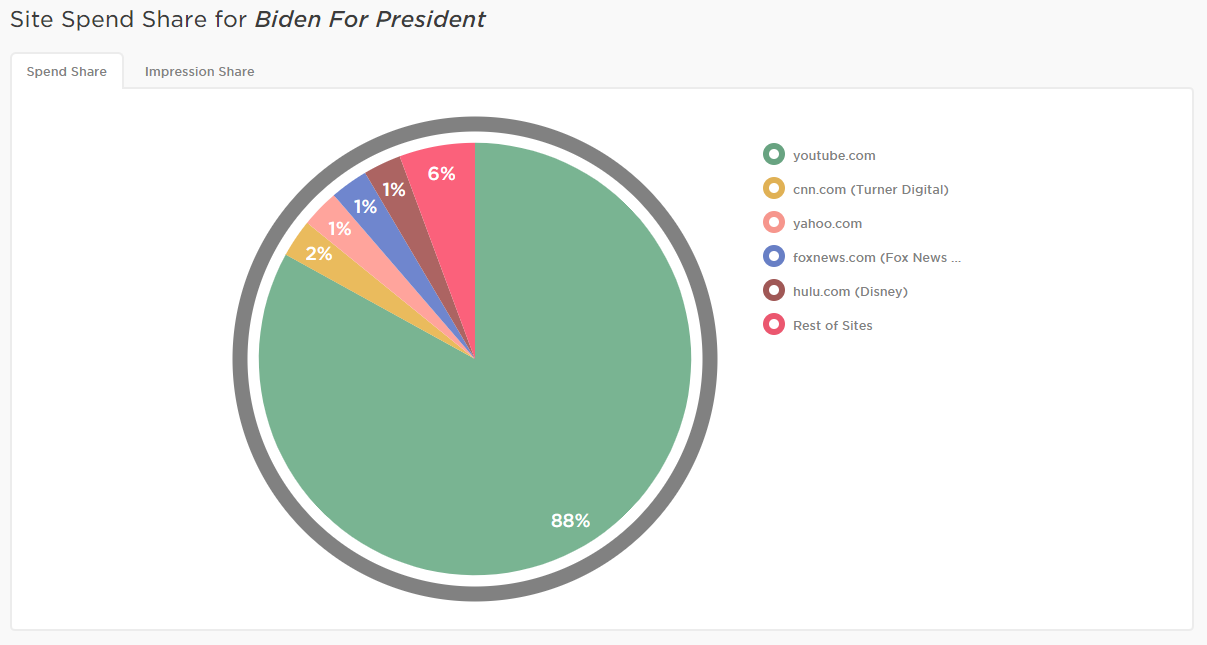 However, there were some similarities. Perhaps most notably, nine of the top ten presidential campaign ads utilized the 1160x239 format, as seen in this ad below:

Like Apple and Disney, Riot Games used YouTube ads to target people who are stuck at home — and it didn't beat around the bush. Riot's top creative from this time period depicts a bored teen in his room clicking around on his computer. A voice comes across the screen and says, “Hey you! Don’t you want to play something different?”

This ad first appeared in October, and has received $10.2 million in spend and 568 million impressions.

Overall, Riot Games Spent $103 million on YouTube ads. YouTube ads accounted for 86% of its total spend and 76% of its total impressions. The gaming company’s strategy was unique among YouTube’s top advertisers in that it only ran desktop video and desktop mobile ads — no desktop display. 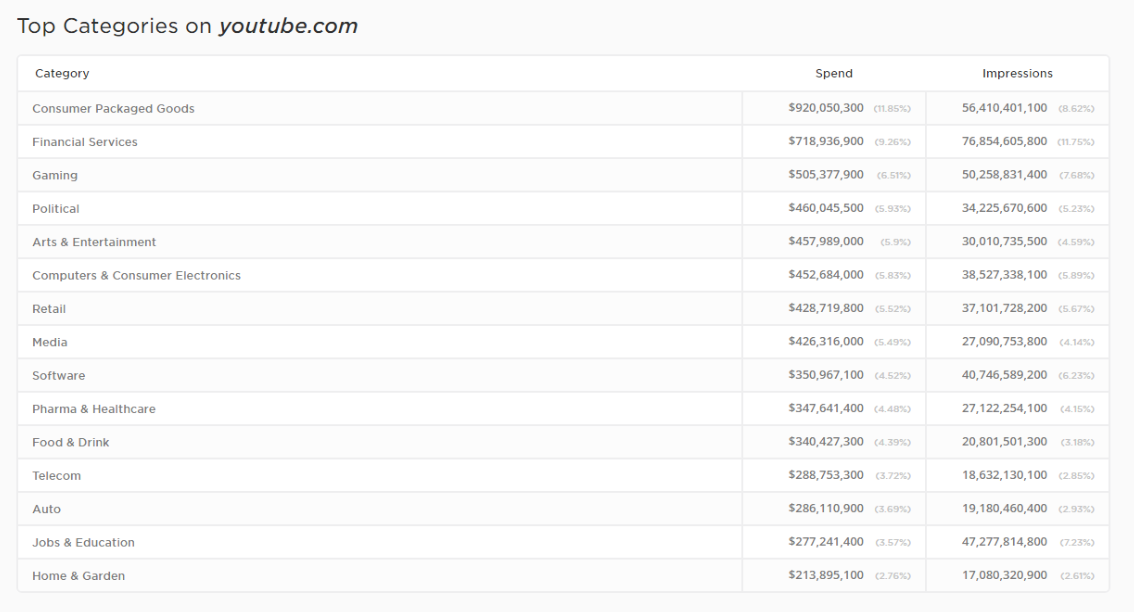 As you can see, CPG was the top category with around 12% of the total ad spend, followed by financial services (9%). No surprise there, given that 70% of viewers say they bought from a brand after seeing it on YouTube.

From the looks of things, YouTube will continue to dominate brands’ digital strategies into 2020, but we’ll keep you posted.